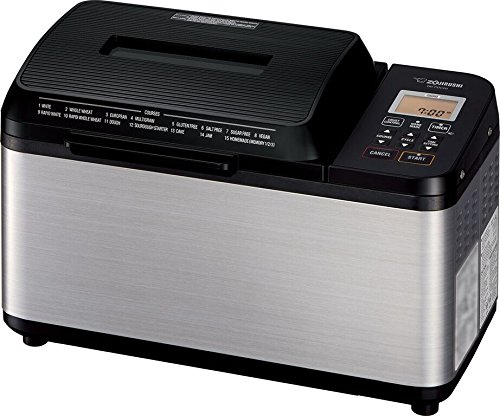 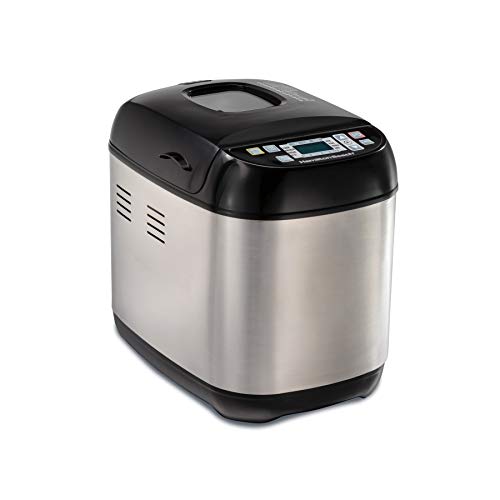 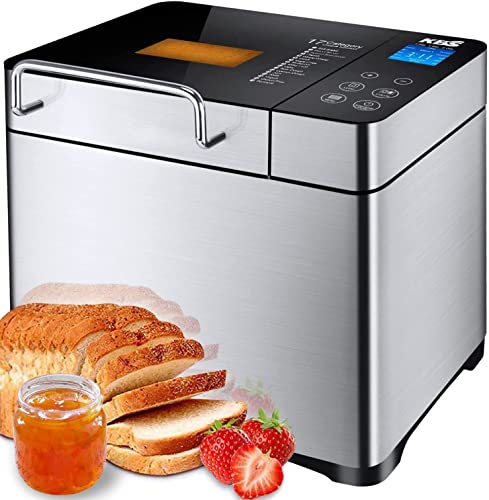 If you’re in the market for an amazing bread maker that can handle whole wheat, the Zojirushi BB-PDC20BA is the gold standard. Zojirushi is a name that every passionate baker knows and loves. The Zojirushi brand makes incredibly powerful bread makers that can tackle almost any kind of task you throw at it.

This model specifically is great for whole wheat loaves. The unit comes with dual heaters on the bottom of the machine and the bottom of the lid. This ensures that the entire loaf is baked and browned at an even temperature and speed.

Additionally, it comes with double kneading blades which are by far the most important feature when baking with whole wheat grains and flours. The blades will knead the dough to perfection and it will never stick because both the blades and the baking pan are nonstick. This helps with cleaning the unit and removing the bread when you are done.

One of the most exciting features is the large window on the machine. This allows you to pay attention to the baking process. You can watch it knead, rise, and bake and you never have to worry about a thing.

Speaking of viewing, the LCD couldn’t be easier to read. It is user-friendly, bright, and the buttons are just as simple. Each button serves a purpose and will help you get the bread you have been dreaming of.

With the press of a button, you have access to special courses and programs depending on your needs. If you are working with whole wheat there is a mode for that. If you are gluten-free, salt-free, sugar-free, or vegan, there is a course for that too! If these courses aren’t quite what you need, there is even a homemade course so you can program it exactly how you would like.

If you are looking to make artisan-style bread, this is the maker for you. It comes in at an incredibly accessible price point and the features feel limitless. If it is bread you are making, then you will be more than satisfied with this unit as it comes with 14 bread-making settings. Some of these settings include gluten-free, rise and artisan basics, French, whole grain, 15 lb express, 2lb express, quick bread, sweet bread, doughs, cake, jam, and more.

Additionally, it comes with the ability to make light, medium, or dark crust shades which is very important when talking about artisan bread. It has an easy to read LCD, and a very sought after delay timer so that you can add ingredients before work and come home to a freshly baked loaf of bread.

The KBS bread machine is another popular option that has fantastic reviews. There are many features on this maker such as 17 customized and automatic programs and the ability to choose the crust color. Additionally, you can make different loaf capacities such as a 1 pound loaf up to 2.2 pounds.

If you are looking to make a business out of bread, this might be the perfect workhorse. This bread machine is a great option for someone looking to work with whole wheat flours because like the other options, it comes with a specific setting to do so.

Furthermore, it has the smart fruit and nut dispenser that automatically puts the ingredients into the bread at the right time so you don’t have to. The pan in the unit is unique. While most simply use a nonstick option, KBS has integrated a ceramic pan which is a healthy option for those wanting to avoid nonstick chemicals. Additionally, ceramic can withstand high temperatures and distribute heat evenly.

What is Artisan Bread?

If you’ve ever picked up a fresh loaf of bread from a bakery and seen it labeled as artisan bread, you might be wondering what that means. Artisan bread doesn’t have a specific definition.

However, an Artisan is someone skilled in a trade that involves making things by hand. Therefore, artisan bread is essentially handcrafted bread by a skilled baker. While this seems pretty simple, there are a few more features that give bread the artisan label.

For starters, because artisan bread is usually made by hand and isn’t packaged like your typical sliced bread, it often has a shorter shelf life. While it doesn’t need to be eaten in a single sitting, it can seem quite short when compared to the store-bought kind. Artisan bread is often made in smaller bakeries, sometimes small businesses that are being started by passionate bakers.

Artisan bread is always made by hand and is made using very traditional techniques to process it into a loaf. This type of bread is often baked using minimal ingredients such as flour, water, yeast, and salt. The main ingredient is time as they take longer to ferment and bake.

Another aspect that can contribute to the term artisan is the type of bread being baked. Baguettes, Ciabatta, Focaccia, Multigrain, and Sourdough are the most common types of bread labeled as artisan. In addition to the type, the finished appearance is just as important. These breads often have a deep-colored crust with rustic markings, scorings, and flour-dusted on the top.

How to Choose a Bread Machine with Whole Wheat Settings

When it comes to making artisan bread, whole wheat flour is almost always necessary. You can certainly have whole wheat bread that is healthy and delicious while still being made in a bread machine. However, there are certain settings and requirements that you will need to find to ensure it can handle whole wheat flours.

For starters, heavy-duty paddles or kneading blades are incredibly necessary. If there are two, even better. Whole wheat flour will need to be kneaded for a much longer period of time than your typical white bread. Additionally, some bread makers come with the ability to make your own rising bacteria for artisanal breads such as sourdough. If you are looking to make artisanal whole wheat loaves, definitely look for this option.

Last but not least, a good bread maker for artisanal style loaves should come with the ability to dispense nuts, seeds, and other ingredients. Certain machines come with a pre-programmed dispenser that will release the ingredients into the dough at the perfect time so you don’t have to worry about a thing.