Early pressure cookers were created with a vent that whistled once the pot reached temperature. If you ignored the whistling too long, there was a risk of hot food being splattered over anyone or anything that was too close.

Modern-day pressure cookers are a lot less scary. When you’re ready to get started, check out our top picks for the best pressure cooker for a glass top stove. 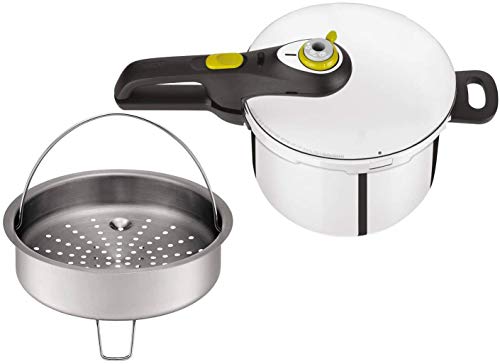 Unlike traditional pressure cookers, this has five separate safety features. These features prevent scalding food or steam from escaping from the pot. They also prevent damage to your stovetop or the pressure cooker.

The gasket placed around the seal allows pressure to release slowly, while a safe closing system prevents pressure from being created until the cooker is sealed.

You also cannot open the cooker until all the pressure is released. An indicator shows you the pressure setting as it rises and the safety valve is a backup that can be used if the gasket does not release pressure.

The two programs that this cooker uses are vegetables or meat and fish. There is also a steaming basket that gives this greater versatility for cooking. However, the steaming basket is constructed of aluminum and food sometimes sticks to it. With a 6L capacity, this can easily help you prepare a meal for up to six people at once.

Finally, this cooker also has several convenience features. It has an ergonomic handle that is comfortable to hold and a triple layer base that helps create an even heating surface and prevents burning. It is also dishwasher safe for an easy clean-up.

Easy to control and monitor pressure

Food may stick to the aluminum steaming basket 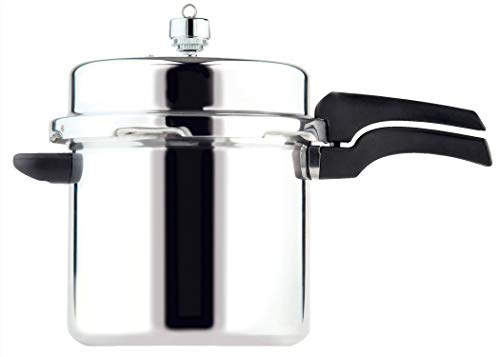 This elegant looking aluminum pressure cooker is made from polished aluminum and feature black phenolic fittings. Its narrow size is perfect for all stovetops (though it can’t be used on induction hobs).

The Prestige model has a higher capacity because it features a domed lid and a perforated separator that lets you cook more than one food at a time.  To get the amount of pressure right, a 3-piece weight is included for 5-, 10-, or 15-pound cooking.

Another major benefit of this cooker is that it comes with the Prestige Lifetime Guarantee. To maintain the pressure cooker, you’ll need to replace the gaskets and indicators every 6-12 months. The gasket does fit tightly when new, but it will become easier to use with time.

Something to note is this does not have all the bells and whistles of electric models. You’ll need to know the cooking time and proportions. If you do not add enough water, the aluminum material may warp on the bottom. This model is not as good for a pressure cooking novice, but it is ideal if you know what you are doing.

As you use the cooker, you’ll need to adjust your stovetop to provide enough heat. Something to note is that it can be hard to get it just right. The first few tries, you’ll want to be closeby in case you need to make adjustments.

Weight included lets you set the right amount of pressure

Domed lid and perforated separator for a higher capacity

Comes with the Prestige lifetime Guarantee

Aluminum is thick and resists rust

Sleek, modern design that will look good in any kitchen

You need experience to use this pressure cooker

The major benefit of this pressure cooker is that it doesn’t matter what type of stovetop you have—you set it on the counter. It also functions as a pressure cooker and has the option for slow cook, steam, and brown/saute. The versatility makes it a great choice for the price.

This pressure cooker is a little smaller than the other models, holding 5.6 liters. It is made of stainless steel and heats evenly. Since it doesn’t require an outside heat source, there is also no risk of uneven heating.

This cooker is fast, being able to cook an entire roast chicken in 30 minutes or less. It heats enough that you can easily brown meat and lock in flavor before using the pressure cooking setting.

Its pre-programmed settings include meat/stew, rice/risotto, soup, beans/chili, poultry, yogurt, and soup. You can also do a manual setting that lets you adjust the temperature, pressure, and time.

The other included functions are slow cook, steam, brown/saute, and keep warm. It also has a delay timer, which is perfect when you want to slow cook something while you are at work.

Each function has a different button and the digital display makes this cooker easy to use. It is perfect for people who want the benefits of a pressure cooker without worrying about having prior knowledge.

The multi-cooker also ships with several accessories, including a stirring spoon, steaming rack, and recipe book to get you started. One thing to note is that this is a little bulky because of its many features. If you have the counter space, however, it’s a solid investment.

Buttons are labeled for easy use

Comes with a recipe book and other accessories

Bulkier than other pressure cookers

Can You Use a Pressure Cooker on a Glass Top Range?

You can use a pressure cooker on a glass top stove, however, you’ll need to keep a few things in mind.

First, you want to use a flat-bottomed pressure cooker. Glass top ranges have an automatic shut-off feature that stops the stovetop from getting so hot that the glass breaks. Cookers without a flat bottom trap heat, making it more likely that this feature will be triggered.

Second, the cooker should not be more than 1” larger than the diameter of the stovetop. A burner that is too small or too large causes uneven heating. This is a big problem if you are using the cooker for canning since you’ll need to reach the right temperature to eliminate bacteria and prevent foodborne illness.

Finally, glass top stoves are more likely to be scratched, nicked, or dinged than others. Be careful not to drag the pressure cooker across your glass top stove. It can be tempting when it is full of heavy food or canned goods, but the heavy pan will cause damage.

Can I Use a Regular Pressure Cooker for Canning?

Regular pressure cookers are often used for canning. Something to keep in mind is that if the auto shut-off feature of your glass top is triggered, it lowers the heat of the contents of the pressure cooker. Even if the jars seal, they might not reach a temperature high enough to eliminate dangerous bacteria.

Many people use pressure cookers for canning because they work in the same way. They heat up enough to eliminate bacteria and then the pressure seals the jar, keeping bacteria away from the food inside.

You’ll want to choose a pressure cooker that maintains a steady heat to use for canning. If there are any batches of canned goods that are not heated to temperature, you’ll also need to dispose of these goods.

Finally, canned goods need enough space to evenly heat. You’ll want to choose a larger pressure cooker for canning. However, be sure you choose a model that does not exceed the diameter of your largest burner too much.

How to Use a Bread Machine

How to Clean Your Garbage Disposal