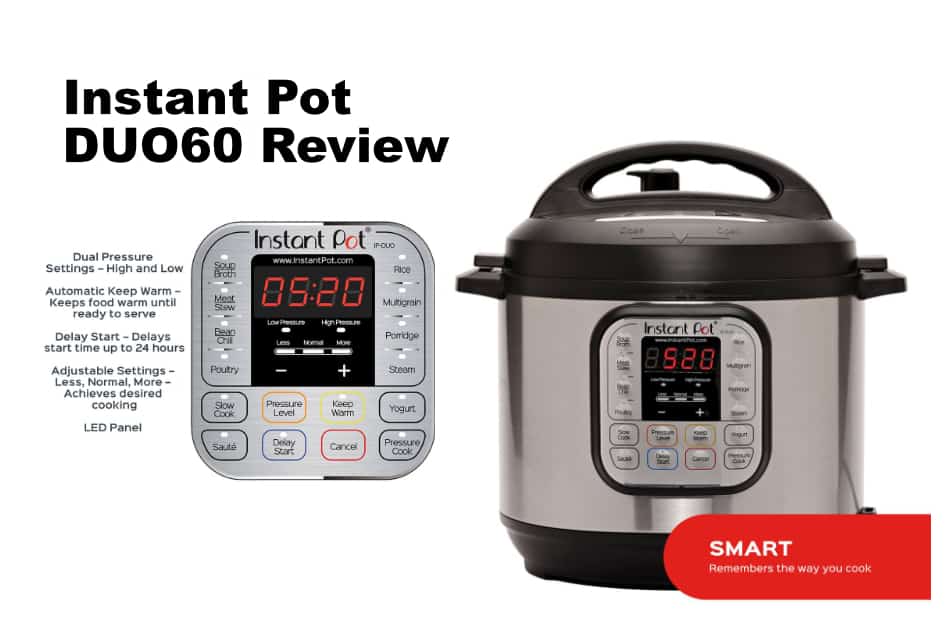 If you watch TV or browse the web, chances are, you’ve heard of the instant pot. This 7-in-1 multi-cooker has been making waves all around the world due to its convenient features and user-friendly functionality.

In this article, we will be thoroughly reviewing the aspects that make the Instant Pot DUO60 the number 1 selling multi-cooker in America!

7 different programs to choose from

Good option for university or college

Easy to use and learn how to use

Easy to use and learn how to use

What Can an Instant Pot Accomplish?

If you are considering this multi-cooker for any number of reasons, you might be curious what it can truly do. It might be labeled a pressure cooker, but does it really get that job done and done well? From what we can tell, it does the job better than most pressure cookers available. Outside of a pressure cooker, it comes with about 7 other features that can replace up to 7 different kitchen appliances.

This Instant Pot specifically comes with features such as the pressure cooker, rice cooker, steamer, yogurt maker, and warmer. It also comes with a sauté function so that you rarely need to break out the frying pan.

It also comes with several features to ensure that your food comes out perfectly. Outside of monitoring pressure and releasing the pressure so that you don’t get hurt, it can monitor the temperature and keep track of the time.

This ensures that your food doesn’t get over or undercooked by taking too long or having the heat too high. It can control the temperature and duration with a heat intensity adjusting features. You no longer need to constantly check the temperature of your food anymore, this machine will do it for you. It truly is a turn-it-on and walk away machine.

How to Use the Instant Pot DUO60

One of the major selling features of this multi-cooker is the fact that it couldn’t be easier to use. Once you plug it in, it is all downhill from there. Simply add your ingredients to the pot, close it up by making sure that the pressure release valve is in the right position and you are ready to go.

You can now choose between various programs such as soup broth, meat stew, porridge, chili, rice, steam, yogurt, and more. Make your selection by pressing the button with the desired action, and in no time your food will be ready to eat! If you would like to delay the start for a few hours, the instant pot comes with a button specifically for it.

Advantages of a Pressure Cooker

The most obvious advantage of a pressure cooker like this one is that it not only cooks the food quickly, but it makes sure it gets to a specific temperature. This is important when cooking foods that need to reach an internal temperature to be safe to eat.

Additionally, it cooks foods quickly compared to any other method. This means that you can spend less time in the kitchen waiting for your chili to cook for 10 hours and focus on the more important things in life.

One of the main advantages of this cooker that can sometimes be overlooked is the overall size of the unit. When it says it can replace up to 7 small appliances, that’s a pretty big deal. Imagine your kitchen without the clutter of a pressure cooker, rice cooker, yogurt maker, steamer, and warmer. Even if it only replaces two of your appliances, that is still freeing up a ton of space.

Additionally, this unit is so affordable that when compared to the price of all of those small appliances individually, you will probably have some extra change to spare when all is said and done.

If you aren’t concerned about downsizing or freeing up counter space, the 7-in-1 feature has another benefit. When you make certain meals, you might be required to sauté some meat or veggies in the pan first and then add it to your stew.

With this unit, you can save yourself the trouble of using a sauté pan and a stockpot or pressure cooker. You can do all of it in the same pot without adding any extra dishes, steps, or time.

Last but not least, who can argue with an easy to clean appliance? Nobody likes doing dishes, not even when a dishwasher is involved and this unit takes all that stress away. It definitely still needs to be cleaned like anything else in your kitchen, but it is incredibly easy.

The exterior of the unit is made with high-quality stainless steel that is fingerprint-resistant. The majority of the cleaning we do is wiping those pesky fingerprints off of every shiny small appliance we own and that can be time-consuming. This feature removes that cleaning completely. Furthermore, the other components are just as easy to take care of.

The inner pot is dishwasher safe but it is also relatively non-stick making the cleaning time super easy, even if you do it by hand. The bottom is 3-ply to ensure even cooking which can make all the difference when dealing with foods that tend to stick. The steam rack, handles, serving spoon, soup spoon, and measuring cup are all dishwasher friendly too.

Safety Features of the Instant Pot

Pressure cookers make all of us a little nervous. Nothing is quite as scary as opening the pressure valve and hoping it was all released before removing the lid. Fortunately, the instant pot takes away all of those fears. There are 10 safety mechanisms to ensure that you can not get hurt when operating this machine.

The first one of these features is the steam release. You simply turn the valve to the open position and the excess pressure pours out. There is also an anti-block shield over the steam release pipe so that no food can get in there. The last thing you want is a blockage that would trap some of that pressure and cause an accident.

Arguably one of the most important features is the safety lid lock. When this instant pot is pressurized there is no way you can open that lid unless you bring out the jaws of life. The lid automatically locks to ensure that it doesn’t get opened.

If you are ever trying to open the lid and it won’t budge, do not force it. It is staying locked for your own good. Additionally, if the lid isn’t positioned properly the pressurizing and cooking will not start until it is in the right position.

On top of all that, there is a leaky lid detection feature. If the lid is not sealed tightly because the ring is broken or not correctly attached, it will not pressurize. If too much steam is being released your food could potentially burn which leads us to the next feature.

Instant pots have slowly made their way into universities, and this wouldn’t be the case if they were dangerous. They might not be a hot plate but it is kind of the same type of machine, except with more features.

The instant pot comes with overheat protection. This safety feature means that if the unit senses that it might overheat it will shut itself down to prevent burning from occurring. This will reduce the risk of all kinds of problems including fires. Even in the pre-heating phase, if the cooker does not reach the desired pressure within 40 minutes, it will continue to lower the heat until it shuts down.

Let’s quickly break down the pros and cons of this instant pot.

We hope that you enjoyed this review of the Instant Pot DUO60. When a multi-cooker comes out with 7 different features at this price point, it is hard to believe the hype. However, this Instant Pot is knocking out those fears and septics day by day.

If you are in the market for a multi-cooker or are simply trying to downsize some of your kitchen appliances, give the Instant Pot DUO60 a look – it might be exactly what you are looking for.

How To Cook Bacon In An Air Fryer

How to Clean Your Garbage Disposal