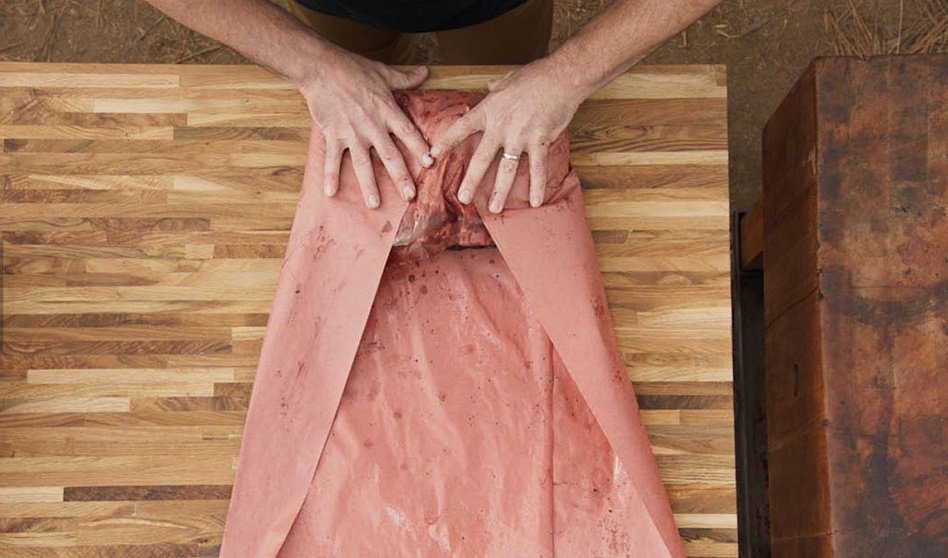 Brisket is probably one of the most delicious cuts of beef there is. And you’re not a true pitmaster of your backyard if you haven’t mastered cooking it.

But in comparison to steaks that you can easily grill to perfection in minutes, cooking a brisket is extremely tricky. It will take you hours to prepare and smoke it before you can bite into your juicy, mouthwatering creation.

On top of that, many things can go wrong in a snap of your fingers. Nevertheless, once you get things right, there’s nothing more satisfying than seeing all your hard work devoured by your hungry guests.

You can find a wide array of brisket cooking tips and recipes online. The majority of it will suggest that you need to wrap the meat. But have you ever wondered why you need to take that extra step?

This guide to wrapping bisket will answer that question along with other tips to help you on your road to cooking your brisket to perfection.

What happens if I don’t wrap my brisket?

Some people prefer to cook their brisket bare in a low and slow method. The reason for this is to get the most out of the smoky flavor that we all love. Since you don’t have anything between your meat and smoke, you’ll expose the brisket to the flavors coming out of your chosen flavored wood chips.

On top of that, it helps in the development of bark since direct heat will envelop your meat. Likewise, it allows the moisture on its surface to escape during smoking.

As a result, it will produce a crisp and thick bark that some smokers deem as the symbol of a perfectly smoked brisket. So if you want your meat to have a nice bark and slathered with smoke flavor, you can opt to cook your brisket without a wrap.

Wrapping a brisket can sometimes lead to a similar texture you’ll get from roasting. Additionally, your brisket will have a less bite to and with a damp, soggy-like bark

Nonetheless, a bare brisket has some risks to it. On top of that list is it will be prone to drying out since you’re letting a lot of moisture to escape. Moreover, its cooking time is longer, which can cause it to become tougher and drier.

The dryness of your meat will on its cut. But your brisket will end up just fine if it has tons of fat marbling and layers of fat

Why should I wrap my brisket?

There are a couple of reasons why you want to wrap your brisket:

What’s a bbq stall you ask? Simply put, this happens when you’re about two hours on your low and slow cooking session. It’s when the temperature inside your meat stops rising because of moisture evaporation on its surface.

The temp can plateau for as long as six hours and then climb steadily afterward. This stall is one of the things that frustrates a lot of chefs and pitmasters when it comes to cooking brisket and other large cuts of meats.

So wrapping a brisket will not only help you dodge the stall but help speed things up as well.

The only real drawback of wrapping your brisket is that it will ruin its bark. Wrapping it early on or simply cooking it for longer periods while it is wrapped can make the bark looked like a mushy, wet mess.

What is the Texas Crutch?

You may have encountered the term Texas Crutch before. You’re probably thinking what does it have to with wrapping your brisket. This phrase has been around for a while and refers to wrapping meat using an aluminum foil while cooking.

A lot of pitmasters use this method during barbecue competitions. That’s because the foil conducts heat to the meat. Then it traps enough of it to help raise the temperature within the wrap.

Basically, it’s like having an oven in your smoker. This will result in helping you combat the stall, fix any fluctuations in the temperature, and cut down on your cooking time. On top of that, it also traps all the moisture in, braising your brisket more effectively as it cooks.

But Texas Crutch has some cons as well.

Although the foil will be able to conduct heat, it will also totally isolate your meat from the smoke. Your brisket will still get a little exposure to smoke since you will not wrap it at the start of the smoking process.

Basically, the trade-off here is less of that smoky goodness flavor to a much tender and juicer brisket with a different texture that you can cook in less time.

Wrapping brisket with a butcher paper is somewhat like wrapping it using a foil. It will also lock in both heat and moisture to help you dodge the bbq stall and ensure your meat will not dry out.

The biggest difference here is that the butcher paper lets some of the smoke in while letting some moisture escape. What’s more, it will cut down plenty of hours of cooking time in comparison to smoking your brisket naked.

What you’ll get is moist meat with deep yet less crisp bark but not as moist as what you’d get from Texas Clutch. Nevertheless, you may achieve a smokier taste with a less bite texture.

Using a butcher paper to wrap your brisket is a good compromise. It comes with bot the benefits and disadvantages of wrapping in aluminum foil and not wrapping at all. That’s why most smokers recommend this method.

This wrapping brisket technique is from the Texas bbq master, Aaron Franklin. His neat technique comes in six simple steps where you’ll need a butcher paper that’s about five times longer than your brisket.

Here’s how to do it:

Put your brisket on the butcher paper widthwise. Make sure its presentation side is facing up. Then, position it far enough so that you can easily fold the paper’s bottom edge closest to you, entirely up and over the meat.

Pull the paper as tightly as you can, and then fit it snug to the brisket’s contours. This is a vital step. So make your every fold you make is as tight as possible to the edge of your brisket.

Fold the butcher paper tightly across the flat while maintaining its tight fit to the brisket’s shape, until you have a long triangle shape working out and away from you.

Flatten and smooth the paper using your hands.

Turn to the opposite side of the triangle and tuck some of the paper below the point to secure it in place. Repeat the triangle fold on the point side to mirror the one on the flat side. Again, smooth and flatten the paper with your hand.

With both of your hands, keep the paper fitted to the brisket. Then roll it towards the far end of the butcher paper. Afterward, pull it in tightly and fold in the sides after finishing the roll.

By now, your brisket is fully wrapped and you have a long rectangle of butcher paper sticking out and away from you. Fold the rectangle over itself and back towards the brisket to divide its length and double its thickness.

Check and ensure that everything is tight. Then, roll your brisket forward and across the spare rectangle of paper. The double-thick section of the paper will be under your beef brisket. On the other hand, the presentation side will be facing up again.

That’s it! Your wrapped brisket is ready to go into your smoker.

You’ll go through a few trial and error before mastering smoking a brisket. And this guide to wrapping brisket can help you with your journey. At the end of the day, whether you cook your brisket wrap or unwrapped will still boil down to your preference.

Are Infrared Grills Worth the Cost?