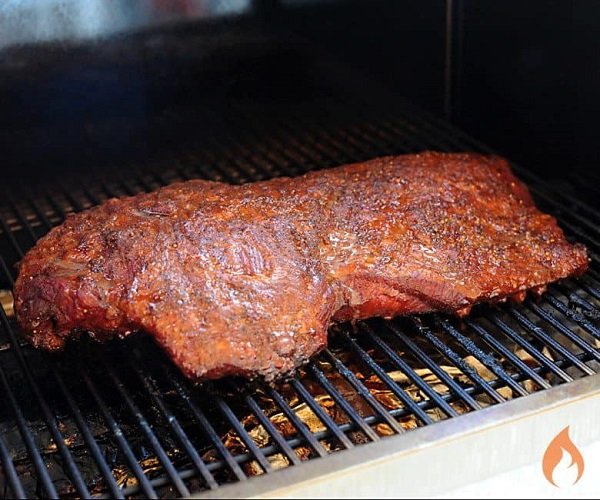 Perhaps you have never smoked a brisket before and are keen to try but are not sure how to go about it. In this article, we will tell you more about briskets and how you should smoke them to get a perfect result.

So, what is a brisket? Well, it is beef and comes from the breast of a cow. It is usually relatively cheap to buy and has the added advantage in that it’s boneless. It isn’t a tender meat, so you need to smoke it low and slow for a good many hours to get a delicious and tender piece of meat.

Brisket is a large cut of meat and can weigh anything between 3 and 8 pounds. It is sometimes cut in half and sold as 2 separate pieces, the point and the flat. The flat is the most popular as it doesn’t have a ribbon of fat running through it as the point does. Some people don’t like the point because it can be too fatty. Of course, nothing is stopping you from buying a whole brisket if you want. Just make sure that your smoker is the right size for your brisket.

Tools Needed for Smoking a Brisket

It goes without saying that you need a smoker. You can choose one with your preferred choice of fuel be it charcoal, wood pellets, gas, or electricity. Wood pellets generally give the smokiest flavor and you can choose from different flavors of wood, such as hickory, maple, or mesquite. However, you can also add some wood chips to the other types of fuel.

You will also need a large wooden cutting board so that you can slice your brisket when it is cooked. Wood is better than plastic because it has grooves that catch the juices from the meat so you don’t lose them. You will also need a sharp knife so that you can slice the meat perfectly. Many wooden boards have the capability of sharpening your knives which is useful.

How to Smoke a Brisket

1. The first thing to do is to choose your brisket. If you can, buy the whole brisket as it gives more value for money. The flat will give you nicely sliced pieces of brisket, while the point gives you meat which you can shred for sandwiches, burritos, tacos, soups, and casseroles. Plan on serving each person with ½ pound of brisket. If you have more than enough brisket, you can refrigerate the rest for meals in the next couple of days.

When buying your brisket, choose one that has the thickest and most uniform flat. If it tapers off, that area will become dry and burnt and you’ll have to get rid of it. You should choose a flat that is about 1 inch thick at the end.

2. The next step is to trim the brisket. You will need to trim the top layer of fat until it is about 1/4” thick. The fat helps to keep the meat moist, but it doesn’t penetrate the meat. Most of it evaporates which is good if you want to rub a marinade into your brisket.

When trimming, round off any corners or edges otherwise they will dry out. Make a slice across the flat end and remove any meat which is less than 1 inch thick as it will probably burn.

3. Your brisket will need seasoning so once you have trimmed the meat this is the next step. Texas-style brisket, which is very popular, is just seasoned with coarse salt and black pepper. Another seasoning recipe is salt, pepper, garlic, granulated onion, a citrus herb mix, and fajita seasoning. You will find that this rub will give you a little kick spice-wise.

Seasoning your brisket for a good few hours is the best plan as it gives the flavors a chance to penetrate the meat. Season and then put in the fridge for at least 6 hours or overnight. You need a big enough pan for the brisket so that it isn’t squashed, and you also need a rack for the bottom of the pan. This allows airflow around your brisket. Once seasoned, cover the pan with foil or plastic wrap. It’s a good idea to flip the brisket half-way through the resting period. An hour before you want to start smoking the brisket, take it out of the fridge and leave to warm up to room temperature.

If you have a wood pellet smoker, you will get the best smoky flavor, but as we have said, you can add wood chips to any fuel method.

The next question is what flavor to use. This is entirely up to your taste buds. If you’re looking for a strong flavor, choose hickory or mesquite. Hickory has a nutty flavor and tastes a bit like bacon. Don’t use too much of this wood however as it can cause a bitter taste. Authentic Texas briskets are often made with mesquite which gives an earthy flavor, but it too can be extraordinarily strong.

Oak gives a medium smoky flavor so it’s not too overpowering. Mild flavors include maple, pecan, apple, cherry, and olive. Maple and pecan are both sweet, so they should be combined with other flavors. As would be expected, apple and cherry have a fruity flavor. Olive is similar to mesquite, but not as strong.

There are different sizes of wood that you can buy. Firstly, there are chips and pellets which are made from wood scraps. You can buy smokers which only use wood pellets. You usually get around an hour of smoking from 1 pound of wood pellets. Pellets and chips can also be added to charcoal, gas, and electric smokers.

Next are chunks which are generally used alongside charcoal. They smoke for longer than pellets so are a good choice if you are smoking a large brisket. After all, you don’t want to have to keep getting up every hour to refill with fuel.

If you have a large offset smoker, you can use logs. They too are a good choice for large briskets.

So, your brisket has reached an internal temperature of 195F. At last, it’s time to take it out of the smoker and eat. However, don’t rush into this. Remove your brisket and let it rest for at least half an hour. This gives the juices in the meat time to settle down and redistribute. The temperature also needs to be brought down a little ready for slicing and serving.

There is an art to slicing your brisket. Don’t just get any old knife and attempt to cut it. You need a sharp knife and a large wooden cutting board. As we have said, wood helps to sharpen knives.

To get the tenderest slices of meat, slice your brisket against the grain. Beware that if you split the point and flat and slice them individually against the grain some bits of meat might end up with no bark. It is best to slice the whole brisket in one go.

Now for the best bit, eating your brisket. With luck, all the hard work will have been worth the effort and you will end up with juicy and tender meat. You don’t want to serve just the meat, however. It goes well with many different sides such as jacket potatoes or even bread. You might want to make a sandwich out of your serving of brisket. Pickles and chutneys also go well with brisket, as do pickled red onions and jalapeno peppers. Don’t forget the sauces. Some people prefer ketchup, others a brown sauce, and others a chili sauce.

We hope that you have been encouraged to smoke a brisket after reading this article. It may seem a little daunting if you’ve never smoked one before, but don’t be put off. Perhaps practice using smaller cuts of meat or sausages in your smoker before you move onto something as large as a brisket. However, if you follow our instructions, you should get a perfectly smoked brisket which is juicy and tender. We hope you enjoy your summer out in the yard or on the patio smoking a delicious brisket that will feed family and friends alike.

Steak and ribs fan? We’ve got you covered:

What Is The Difference Between Grilling And Barbecuing?