Is Turkey Halal? Everything You Need To Know! 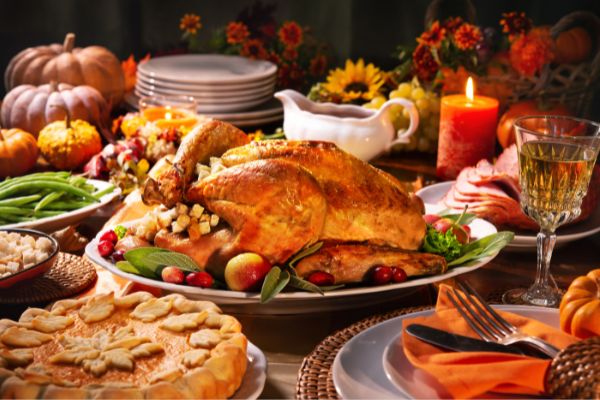 The fall and winter seasons have characteristic meals, ones often centered around turkey. Family and friends come together to feast and enjoy each other’s company. But is turkey halal? Whether you’re a practicing Muslim or have Muslim friends, knowing if turkey meat is halal is a good idea. After all, you don’t want to miss out on all that roasted deliciousness of halal thanksgiving turkey!

Fortunately, we have the answers right here.

What Does Halal Mean?

Perhaps you are trying to find out if Muslims can eat turkey meat because you’re having over some Muslim friends for a get-together. In that case, you need to know what halal means. Halal is Arabic for “lawful” or “permitted,” and it is used in contrast to haram, meaning “harmful.” Halal practices are allowed in Islam, while haram practices are not.

Halal is more than a dietary practice, though it most often concerns food and drink.

Similar to but not to be confused with Kosher, in order for something to be considered halal, it must be slaughtered with the correct process. This includes:

Carnivorous animals or predatory birds (like hawks and eagles), along with pork, are forbidden.

Do note that you don’t need to be Muslim to choose halal items. Many people who are concerned with animal welfare choose halal, because it’s more humane.

Is Turkey Halal? How Do I Know?

According to dhabihah, or Islamic law, turkey meat, like most poultry, is perfectly fine to eat. There is no prohibition against turkey as long as it has been slaughtered with halal practices.

Therefore, as long as you can find turkey meat from a halal butcher or a certified-halal brand, you can eat it or serve it to Muslim guests.

What is Halal Turkey?

Simply put, a halal turkey is different from the turkeys that are raised on traditional farms and processing plants. Because of the philosophy behind halal, the turkeys are treated well throughout their lives and need to be deemed healthy prior to the end. Furthermore, the animals are not slaughtered in a line but individually and never in front of one another.

In a non-halal farm, turkeys may be kept in cramped, unsanitary conditions then sent down an assembly line for processing.

Where to Find Halal Turkey

Finding a halal turkey meat may be difficult, depending on where you live. Larger cities or areas with a greater Muslim population tend to have halal butchers and Middle Eastern groceries. In the US, for instance, Chicago and New York City have several stores in the downtown area. Some supermarkets have also started offering certified halal turkey meat during the holidays.

You can also find online Middle Eastern stores, like Kalustyan’s (NYC), where you may be able to order a halal turkey meat.

There has been a lot of confusion over the years if Butterball-brand turkey is halal. The claim was started by anti-Muslim blogger Pamela Geller who said that Butterball was selling turkeys in 2011 that were certified halal. The blogger had no understanding of what halal meant, conjured up a response from Butterball, and went on to attack the company.

Naturally, this created controversy and a petition calling for Butterball to retract their halal practices.

However, Butterball turkey is not, nor has it even been, halal. The company also isn’t Kosher. This myth has been debunked not only by Butterball, but by the site The American Muslim.

So, no, you shouldn’t buy Butterball for your next halal turkey dinner.

There’s No Halal Turkey Near Me. Does Kosher Count?

In the event you can’t find any turkey meat that is halal, you might turn to Kosher. Just make sure that you clear this choice with any other guests, as some Muslims will not accept Kosher.

Also, many Kosher turkeys are blessed with salt before packaging. You should keep that in mind, because it could affect the amount of salt in the recipe.

Here are some Kosher turkey options:

You may also be able to find Kosher turkey on Amazon.

When Should I Purchase a Halal Turkey?

One thing to keep in mind is that halal turkeys are limited, and the demand is getting higher. If you are shopping around for a halal turkey meat, be sure to reserve yours a week or two prior to the event. Try to have your bird at least 2-3 days before you are going to cook it. That will give you plenty of time for gathering seasonings and preparation.

Is turkey halal? Provided the turkey has been killed according to Islamic law standards, it is accepted as a halal meat. There are brands of halal turkey meat available at the grocery store, but your best option is to call a halal butcher near you. You can then have a certified halal turkey meat sent right to your door!

If the bacon is made solely with turkey that is certified halal meat, then yes. Although Muslims do not eat pork, halal turkey bacon could be a great substitute for them.

2. Is turkey halal in Subway?

According to Subway, all of the menu items containing turkey meat are halal certified. In the UK, you can get pork items on the menu substituted with a turkey ham or turkey rashers.

There are halal slaughterhouses and Middle Eastern shops in the USA, but the majority of turkey bought and sold in stores, including turkey deli meats, are not considered halal. If you are looking for halal turkey in the US, be sure to look for the halal certification mark on the packaging. That is the easiest way to tell if the turkey meat is halal.

4. Is eating turkey allowed in Islam?

Yes, eating turkey is allowed in Islam. Since turkey is not considered a large talon bird of prey, it is considered safe to eat, alongside chicken.

Can you use margarine instead of butter in Cookies?

Sweet Cream Butter vs Butter: Is sweet cream butter the same as butter?

Can You Refreeze Shrimp? What You Should Know!

Buttermilk vs. Heavy Cream: is buttermilk similar to heavy cream?