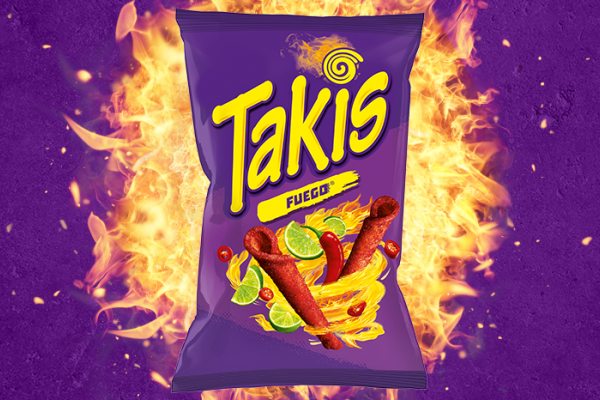 Any vegan will know how hard it is to find tasty snacks that conform to their diets, and any vegan will know all too well the lengthy searches and supermarket treasure hunts that they have to go on just to find the right snacks. Vegan snacks are hard to come by, and by this, I am talking about genuine vegan snacks. Doritos and other similar companies have products that they claim are vegan-friendly but they are made in the same place as the vegan-unfriendly counterpart. So if Doritos cannot be trusted, let’s look at a competitor company and see are Takis vegan?

Takis are roasted tortilla chips that are rolled up and then coated with artificial flavors, seasonings, and flavorings. Takis are a packaged snack that comes in a chip bag, they have the same corn-based recipe as Doritos. The main ingredients are corn starch, corn, vegetable oil, flour, and preservatives. The Mexican snack company, Barcel, which produces Takis has released a diverse range of flavors sure to suit the palette of anyone who likes chips. These flavors are;

There are a few more flavors but these are the most popular ones by far. They can be found on the shelves of almost every grocery store nationwide and are as famed as hot Cheetos and Doritos. They are loved for their complex flavor profiles and variety of different flavors while also being a satisfyingly crunchy snack.

Veganism is the philosophy and lifestyle choice of excluding and avoiding all forms of animal exploitation and cruelty and instead promoting the use of animal-free products as more sustainable and harm-free alternatives. These alternatives can be a range of products varying from materials such as faux leather, or ingredients such as soy milk and other animal-free food items.

A vegan diet is also said to be all about maintaining your health and living a balanced life with healthy food, exercise, and a good mindset. It proves to go further than just the diet and instead focuses on a lifestyle of health and care for yourself and everything around you. There are many reasons to go vegan, but it is also quite a difficult transition as you are more limited to what food and products you can consume, as well as vegan food tends to be more expensive than the non-vegan alternative.

Can Takis be eaten by a vegan?

The main base of Takis, the corn chip roll is completely vegan. The ingredients for it are nothing out of the ordinary and include no animal products whatsoever. That being said, when you look at the Takis Fuego flavors ingredients, you can see two outliers in the form of artificial colorings red #40 and yellow #6. These food dyes are known to have been tested on animals in the past and while there is no guarantee that Barcel is doing so, it might be worth a shot to avoid these.

Veganism is all about eliminating as much animal from your diet as possible, so to be a strict vegan you would want to avoid all Takis. However, if you are a little less inclined to exclude them, you will want to be careful about some of the flavors as they have non-vegan ingredients in them. Some of the flavors even have non-vegetarian ingredients in them.

The main ingredients you want to look out for are;

These ingredients can be found on most flavors despite if they have natural and artificial flavors, so it is best to keep an eye out.

What are the Takis vegan flavors?

The vegan-friendly flavors are limited, and there are only 4. They exclude all animal ingredients and dairy products with the only exception being the artificial color used on them. The vegan Takis flavors are;

I also included which packaging they come in as it can be quite overwhelming hunting for them by flavor alone. Some of the packaging bears a striking resemblance so it is important to be careful otherwise you may pick up the wrong flavor. These flavors are completely safe for vegans to eat as long as they are okay with the artificial colors.

What are the non vegan takis flavors?

The counterpart to the vegan ones would obviously be the non-vegan ones, so to make sure you do not accidentally buy or eat them, I will list the flavor and packaging so that you always pick the vegan option instead of making a mistake. The non-vegan flavors are;

You must be careful as you can see that the vegan salsa brava flavor uses the exact same colors as the crunchy fajitas flavor. While they are the same colored packaging, they use different primary and secondary colors, you want the bag with red as the primary color.

While discussing if Takis are vegan or not, it is probably worth discussing if they are gluten-friendly or not. Gluten is not harmful to most people, yet some will try and avoid it in their diet because of allergies or diseases they may have. Wheat and gluten are known to cause some health problems, but this is rare unless you have a gluten intolerance.

All Takis are marked with “may contain traces of milk, egg, wheat, and peanuts” which means they are not gluten-free. At the very least this means that they are unsuitable for people with celiac disease as the small amount of wheat may be enough to trigger a reaction. The trace ingredients are only mentioned as Takis are made using the same machines that Barcel may use to make other products. It does not directly mean that the ingredients are in Takis, it just means that there is a risk of cross-contamination. If you have an allergy to any of the trace ingredients, then it is best that you avoid Takis entirely, as it is not worth the risk of you having an allergic reaction.

Despite any allergies you may or may not have, these crunchy snacks are still far from healthy. The artificial colors and flavors as well as MSG, low-quality oils such as rice bran oil, canola oil, and soybean oil are enough to show you that there are healthier alternatives to the snack.

If you want a vegan snack similar to Takis with the same Takis flavors, then you might struggle. However, there are some companies that make vegan-friendly snacks like this with different flavors that are equally tasty.

A completely vegan safe option would be Beanfields Bean Chips. As a whole, they are vegan-friendly and delicious but the Jalapeno Nacho flavor is especially nice as it is quite close to some of the Takis flavors. The bean chips use beans as their main ingredients and are also gluten-free.

Does Takis have pork in it?

None of the Takis flavors have pork used as an ingredient in them. At most, the ingredients will contain egg and milk, but none of the flavors use meat.

What Goes With Cornbread – 17 Tasty Ideas

Fusilli vs Rotini: What is the Difference?