Can You Eat Grits on a Keto Diet? 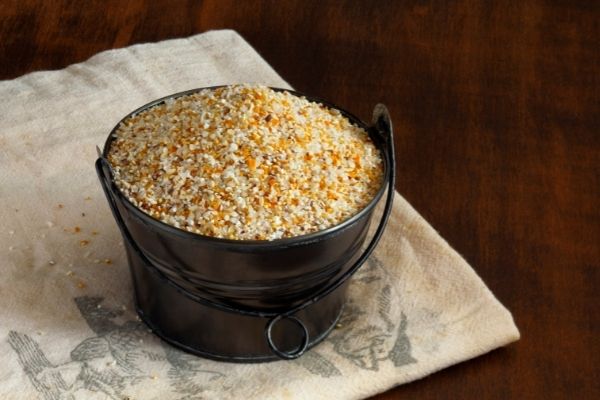 Grits are a popular food staple in the Southern states of the U.S. If you’re used to eating grits on a regular basis but now you’re going keto, you may be wondering, “can you eat grits on a keto diet?”

Unfortunately, about 90%of grits are carbohydrate-based (will need a source). One cup of this food contains approximately 23 grams of carbs when it’s unflavored, meaning it’s not the best option for a keto lifestyle.

This may be disappointing to you, but it’s really important that you understand what foods are optimal and which you should skip when you’re following a keto diet to look and feel your best.

How Are Grits Made?

Grits is a Southern comfort food that dates back to the colonial days.

Not to be confused with polenta, grits are usually made from dent corn, a starchy and less sweet variety. On the other hand, polenta is made from finely ground yellow corn.

The corn is then treated with lime or another alkali to remove the hull, which makes it hominy. After the corn is dried, it is coarsely ground to become hominy grits.

The Traditional Way of Making Grits

Grits date back many years to a time when the Native Americans used to pulverize corn into cornmeal. The first porridge recipes that they would make were very similar to how grits are made today. Natives taught the English settlers how to make their recipes, and grits turned into what it is today in Southern culture.

Grits have become a breakfast staple but they can be made in a more in more savory version for lunch and dinner. It’s commonly paired with eggs for breakfast if you are on a keto, or shrimp for a meal later in the day.

Determining if Grits are Keto Friendly

If you’re following a ketogenic diet, then it’s advised that you limit the amount of carbohydrates that you’re consuming each day. You’re supposed to eat a diet that’s based on meat and vegetables, eliminating anything that is starchy.

Grits are made from corn which is a vegetable, but it contains much more carbohydrates than vegetables like broccoli spear or spinach. Most people try to stick with 20 grams of carbs per day on a keto diet. Your one serving of grits would immediately take you above that threshold. The amount of carbs in one serving of grits would amount to even more if you chose a flavored variety, like cheese grits.

Can I Eat Grits on a Keto Diet?

You don’t have to completely deprive yourself of foods that you enjoy when you’re following a ketogenic lifestyle. However, it’s all about balance. You can enjoy a small amount of grits once in a while, but make sure that you’re a

You don’t have to completely deprive yourself of foods that you enjoy when you’re following a ketogenic lifestyle. However, it’s all about balance.

You can enjoy a small amount of grits once in a while, but make sure that you’re adjusting your meals for the rest of the day to account for that serving. You can also stick to trying one or two spoonfuls of grits instead of eating an entire bowl of them. You’ll get that comforting flavor that you know and love, without compromising your diet plan.

How Many Carbs Are in Grits With Almond Flour?

Being able to change some of your favorite recipes to accommodate your keto lifestyle allows you to enjoy some recipes without having to use up all of your carbohydrate points for the day.

Traditional grits are made using cornmeal and are, therefore, high in carbs. But there are a number of keto-friendly grit recipes that substitute almond flour for the cornmeal. This reduces the carbohydrate count.

Here’s a great recipe that you can use the next time you have a craving for grits.

– ½ cup of cheese (Your choice of variety)

-Combine 1 cup of almond flour, 1 cup of water and ½ teaspoon of salt in a saucepan.

-Let the mixture come to a slow boil. Let it simmer for about two to five minutes.

-Mix in ½ cup of shredded cheese to the mixture, allowing it to melt.

-Top your bowl of grits with an extra sprinkle of cheese before serving.

Where Can I Buy Keto Grits?

It’s nice to know how to make your own food when you’re trying to eat healthy and take care of yourself. Mixes and other ready-to-cook products can make your life a lot easier, but you can’t always control how many carbs you’re consuming.

We covered a grit recipe using almond flour that’s much healthier than the traditional version. There are other options that you can make from home in just minutes. Cauliflower rice is an excellent substitute for grits as well as many other recipes calling for rice or pasta.

The Grits Carb and Calorie Count

One 100-gram serving of plain grits contains approximately 13 grams of carbohydrates. That serving is incredibly small, and we’re talking about grits that don’t contain any other ingredients.

Most varieties come with cheese or another flavoring added.

While grits can fill you up and provide you with energy, there are other keto-friendly options to consider. For example, you can swap those 13 grams of carbs from grits for 1 gram of carbs that come from eating two eggs for breakfast.

In regard to calorie count (which is also important when you’re dieting), a 100-gram serving of grits contains about 59 calories. The calorie count can be much higher based on how the grits are made. Most recipes call for high calorie foods like cheese, milk, maple syrup, bacon, etc.

What Grains Can You Eat on Keto?

There are a number of keto professionals that recommend staying away from grains all together, but that might not be something you’re interested in. Eating grains in moderation and changing up which ones you eat may help. Also, keep an eye on the net carb count of your grains instead of the overall number of carbs.

Look for grains that have high amounts of fiber and lower carb counts such as:

This cereal grain comes from cracked wheat berries and can be used for soups, stews and tabbouleh (link to definition). One cup of bulgur contains just 25.5 grams of net carbs.

Millet is an ancient grain that contains 39 grams of net carbs in one cup of product.

Not actually a grain but often served as one, quinoa is actually a flowering plant that contains 34 grams of net carbs in one cup of product. It’s a little on the higher side, but you can work small amounts into a meal with other proteins and vegetables.

This processed grain contains 34.5 grams of net carbs in one cup of product.

If you would like to explore more about quinoa and couscous we recommend you learn the differences.

Grits are generally safe to eat, especially for people who are following a gluten free diet. However, the consumption of corn can cause some people to experience diarrhea, fatigue, constipation and bloating. Grits are also very high in sodium, which can cause you to retain water and can raise your blood pressure.

Can I eat grits on a low carb diet?

If you’re following a low carbohydrate diet, giving up your carb intake for the day to a small bowl of grits may not be your best choice. You should be shooting for 20 grams of carbs per day, and you will easily consume more than that if you’re eating grits. Not to mention that one serving will prevent ketosis (source for ketosis definition) in the body, which is what you’re striving for. Opt for a more keto-friendly meal option that is much lower in carbs. This may include bacon and eggs.

What grains can you eat on keto?

There are a number of keto professionals that recommend staying away from grains altogether, but that might not be something you’re interested in. Eating grains in moderation and changing up which ones you eat may help. Also, keep an eye on the net carb count of your grains instead of the overall number of carbs. Look for grains that have high amounts of fiber and lower carb counts such as:

Are grits good for weight loss?

Grits are delicious and they have the ability to leave you feeling quite full without having to eat a ton of fat (as long as you’re sticking with a plain variety). The more butter, milk and salt that you add will make them less healthy. If you’re on keto, grits are something you’ll probably want to skip entirely to limit your carb intake.

Grits may be delicious and comforting, but this versatile food isn’t an acceptable option on a keto diet. Corn is something that we try to stay away from when we’re paying such close attention to our carb count. You may be able to consume a small serving of grits here and there, but is it really worth it? You can utilize those carbs in healthier ways.

If you happen to be eating keto foods on a cyclical basis, you’re more than welcome to consume them when you’re off your diet. Though be careful, eating them too often can put that weight right back on.

What to Serve with Arancini? 9 Delicious Side Ideas

How to Cook Frozen Lasagna

What To Serve With Eggplant Parmesan?

How Long To Boil Quail Eggs?