Can You Spray Pam Directly On Food Safely?

When it comes to cooking, people can often get tripped up on how something is intended to be used. Ironically, this can be especially true with products meant to make things convenient. One example of this is Pam, which despite being intended to be a quick and simple way of lubricating pans makes many people wary. This leads to the question of the article, can you spray pam directly on food?

Pam is a type of cooking oil spray often called nonstick cooking spray. These types of spray are often derived from different types of oil such as olive oil, coconut oil or vegetable oil. Typically, they’ll be used to provide lubrication to cookware such as cake pans or bread pans.

The result of which is that a thin layer of oil is created as the spray cooking oil is melted by a stove or heat source from the oven. The application of this spray coating layer prevents food from sticking to hot pots and pans.

Should Pam Be Sprayed On Food?

Pam cooking spray, along with any other type is inherently intended to be used in cooking. When used as intended such as to grease baking dishes like cake pans and muffin tins mean it will be coming into direct contact with food. This means that pam cooking spray can be used applied directly to food without any ill effect as it will act like near enough any other cooking oil.

However, in most instances, Pam will work far more effectively when you use cooking spray directly on the pan in question. This is because the main intent is to lubricate cookware and baking pans. As such, they will form a non-stick layer when sprayed on one of these surfaces. If sprayed on the food and not the cooking surface though, this layer may not form properly. 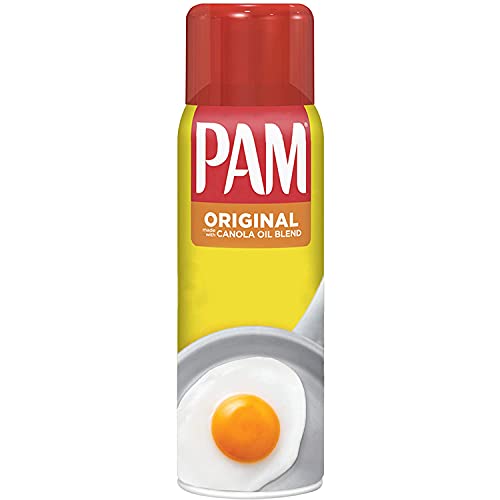 Aside from providing lubrication for your cupcake pans, Pam also has a couple of other benefits. Along with the extra bit of convenience provided by sprays like Pam, they also provide some other advantages.

A big reason why cooking oil spray like Pam is good to use is that it will typically be a neutral flavoured spray. This means that the spray won’t have any strong or harsh flavours that will detract from the quality of the cooked foods in question.

Pam cooking spray, like other variants, is mainly derived from different types of oil. Different varieties will often emulate more traditional oils such as palm oil, peanut oil, or olive oil. However, whilst many traditional cooking oils will contain roughly one hundred and twenty calories per spoonful, Pam has next to none due to containing only a small amount of oil.

Using Pam Instead Of Cooking Oil

Despite being lower in calories and coming in an aerosol format, Pam can nearly perfectly replace cooking oil in cooking. This is because the small amount of oil it does contain will be more efficiently distributed across the cooking surface in question than would be possible with oil.

Whilst it is lower in calories, it is only so if used sparingly. The reason being that overzealously spraying Pam on your cookware will add a significant amount of calories back into your dish.

However, despite Pam being able to perfectly replicate the lubrication properties of cooking oil, it does have a downside. When Pam is used to replace cooking oil, many people tend to find the resulting flavour to be somewhat underwhelming.

This is because these cooking sprays only contain small amounts of oil. As such, a compromise used by some is to add a small amount of traditional cooking oil to the pan to achieve the best flavour possible whilst reducing the calorie count.

Cooking oIl is often used as a substitute for butter whilst baking as it provides the same non-sticky moistness. Often this is done either for those with dairy allergies or vegans. As a result of this though due to Pam being derived from cooking oil it can also be used as a butter substitute.

Using Pam Instead Of Butter

LIke cooking oil, butter contains a lot of calories. In addition, though, it is incredibly dense in fat and cholesterol. As such, many people may wish to seek out healthier alternatives when baking.

This is where Pam and other cooking sprays come in. They can fulfil most of the role that butter will whilst making a cake or other baked goods.

However, like with using Pam in place of cooking oil, the final taste will inevitably be somewhat diminished. This is because butter provides baked goods with a unique buttery taste which will ultimately be lost if the butter is replaced with cooking spray. As a result, the taste is reminiscent of if margarine was used instead of butter.

Due to this like with cooking oil, a compromise is often to use half and half. The benefit being a reduced-calorie content and fat content whilst some of the buttery taste remains. Alternatively people may use one of the many other butter substitutes.

Is Pam Or Other Cooking Sprays Hazardous To Your Health?

Due to its nature as an aerosol-based cooking oil and the addition of chemicals such as soy lectin, many people often wonder, is cooking spray bad for your health?

The simple answer is no, pam or indeed any other FDA approved oil sprays will be perfectly safe to consume. Many people may be hesitant due to the potential chemicals included, however, all food has chemicals in it technically.

Additionally, in the past, there has been a concern about the safety of Pam cans themselves. This stems from a handful of Pam cooking spray lawsuits alleging that the cans themselves have exploded.

However, when used safely and correctly, the company claims this shouldn’t be possible. As such, to avoid risk, you should spray your cookware with Pam away from open flames. This way the oil will not catch fire. 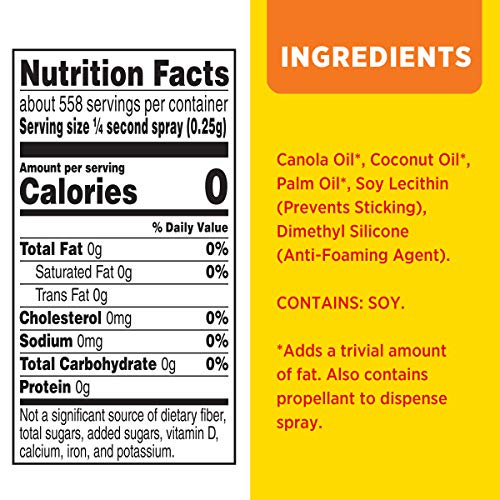 Yes, You Can Spray Pam Directly On Food?

Pam is perfectly safe to be sprayed on food. However for it to be at its most effective it is best used on heated surfaces to avoid food sticking to them. That said, Pam can also be used as a healthy substitute for cooking oil and butter.

However, doing so will alter the flavour of the food that it is cooked or baked with.  As such many people will typically use a half and half method to get some of the benefits of both options.

Pam cooking spray is not toxic as it has been approved by the United States’ food and drug association. This approval means that it can be sprayed directly onto or incorporated into food with no adverse effects on your health.

Is Pam bad for you?

Pam is not bad for your health at all and has been approved by the United States’ food and drug association for use on food. Additionally, when compared to ingredients such as cooking oil or butter, Pam is much healthier. This is because it has fewer calories and fat than both of these. That said, it will slightly alter the flavour of food when used in place of either butter or cooking oil.

Can you spray Pam directly on food for the air fryer?

Pam or indeed any other kind of spray oil should never be used inside an air fryer. This is because the contents of these sprays are prone to damage your air fryer due to including harsh chemicals which are harmless to humans. Instead, you will likely need to use either traditional cooking oil or invest in a high-quality oil mister.

What To Serve With Pulled Pork? – 15 Delicious Side Dishes

What To Serve With Jalapeno Poppers?

How To Cook Melt In The Mouth Roast Beef? (Tested Recipe)

How long does cooked crab last?