Does Tahini Go Bad? Everything You Need to Know

Whether store-bought or homemade tahini (or tahina as it is also known) is used commonly and well-loved in various regions around the world such as the Eastern Mediterranean, North Africa, the Middle East, and some parts of Western Asia. Of course, the popularity of tahini has slowly spread from these regions to places such as the UK and America. However, if you’re not too familiar with tahini, then you may be wondering, does tahini go bad?

Tahini is a condiment made from toasted and ground sesame seeds, that is visually quite similar to something like peanut butter. However, the color and consistency of tahini is really the only commonality that it does have with peanut butter or indeed most other nut spreads.

Tahini isn’t sweet at all. Instead, whilst it is nutty, it is also very earthy and often quite bitter. That said, if it is overwhelmingly bitter then this is likely a sign the tahini is not very fresh.

Often, tahini will be used as a condiment. However, just as frequently it will also be used as an ingredient in other dishes such as hummus, baba ghanoush, or even halva.

Like most types of foodstuff, tahini will in fact go bad eventually. However, surprisingly, tahini has an incredibly long shelf life, although when not stored properly it will likely not last as long as it should do.

That said though, whether store-bought or homemade, tahini paste can have a long shelf life, although the former is likely to last a lot longer than the latter due to containing additional preservatives.

The reason that tahini has such as strong shelf life though is thanks to the presence of oil as it is one of the main ingredients aside from sesame seeds. The sesame oil acts as a natural preservative and as a result, prevents the other ingredients from spoiling as quickly as they would have otherwise.

How Long Does Tahini Last?

There are many variables at play that will determine how long a jar of tahini will remain edible, along with remaining pleasant to eat.

As mentioned above, a homemade jar of tahini lacks the same level of preservatives found in store-bought tahini. As such, the shelf life of the sesame seed paste will not be nearly as long as only the oil is keeping it preserved in a fresh state.

That said though, another huge factor when determining tahini shelf life and freshness is whether you have an opened or unopened jar of it. This is because an unopened tahini jar will last much longer, due to the airtight seal having not been temporarily broken. The reason this is so important is that an airtight container prevents the tahini from being exposed to open air which will cause it to spoil much more quickly.

Additionally, different brands of store-bought tahini will often vary in how long they will be good for. This can be seen through the expiration date as the length of time recommended by one brand will likely differ from another brand.

With the above in mind, determining how long your tahini will last can be slightly tricky. That said though there are a few guidelines you can follow to ensure you maximize the quality and shelf life of your tahini. These guidelines are as follows:

For homemade tahini, it can be expected to last for roughly a week in the refrigerator whilst in the pantry or kitchen cabinet, it will likely up only last up to three days.

How Should You Store Tahini?

As mentioned above whilst it stays fresh for quite some time, how you keep tahini stored will greatly impact how long this sesame paste or indeed foods it is used in such as homemade hummus will stay fresh.

An obvious solution to some might be to freeze tahini. However, this is often not recommended since tahini can be extremely sensitive to cold temperatures and therefore negatively affect the taste and texture.

Instead, you are better off storing it in the fridge or pantry or manufacturers suggest keeping tahini in either location or occasionally both. Additionally, you can avoid having prematurely rancid tahini on your hand by ensuring that it is stored properly.

Storing Tahini In The Pantry

Tahini should be stored in a cool, dry place that is away from direct sunlight and heat. As such both the panty and the fridge are ideal choices. However, many people will prefer to opt for the former rather than the latter due to tahini having a long shelf life and not wanting the cold of the refrigerator to impact the texture.

When storing in the pantry though, it is important to keep it sealed to avoid having a jar of spoiled tahini. Additionally, it is also important to remember that homemade and organic tahini will not last nearly as long as regular or store-bought variants.

When you refrigerate tahini, the shelf life will invariably be much longer. As such this is often the best choice for organic or homemade tahini, as they will not have a very long shelf life compared to typical store-bought varieties. This especially applies to those who live in warmer climates since the higher temperatures can cause unrefrigerated tahini to go bad much more quickly. 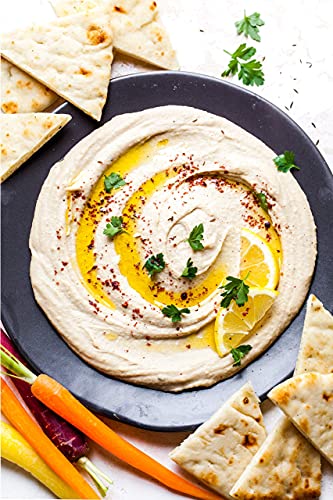 Storing Tahini In The Fridge

That said though, when storing tahini in the fridge it will inevitably become thicker. Now for some people, thick tahini isn’t an issue. However, it does make it significantly less spreadable and less suitable as an ingredient with even a good stir sometimes not being enough to remedy the issue.

Additionally is important to take a few extra steps to ensure you don’t end up with a jar of bad tahini. The first of these steps is to ensure that you always screw the top back on tightly as not doing so may allow moisture to get in which encourages mold. Secondly, in order to reduce the impacts of temperature changes, you should only scoop out the tahini you need without removing the jar from the fridge.

When storing tahini, using the right type of storage container is crucial to maximizing freshness for as long as possible. As mentioned earlier, this means that you should use an airtight container to avoid pollutants from the air, moisture, or any nearby foods that will impact the freshness.

Fortunately, in the case of store-bought tahini, keeping it properly stored is quite simple since even an opened jar can be resealed thanks to most having an airtight seal. Although for this to truly be effective you must screw the lid off very tightly.

When storing homemade tahini though things can be slightly more tricky. Mason jars are a good option as are Tupperware containers due to both being airtight. However, if in a pinch, using tin foil or plastic wraps such as cling film and a bowl should do the job.

How Do You Know If Tahini Has Gone Bad?

Often times you will likely notice that your tahini has deteriorated in quality before noticing whether it has gone off or not. Even with proper storage, tahini will eventually go bad, although for it to become completely inedible can take quite a while.

Often after a few months even in such an environment where it should be fine, you may not find it appealing, as it may have become a more thick paste or slightly solidified, although not completely. In such a state, people may not be too comfortable with consuming it. However, with a thorough and good stir, it will likely be perfectly safe if no signs of it being off are present.

If though, some of the signs of your tahini being off are present though, then you should dispose of it immediately as it will likely be dangerous to consume. Signs that it off includes the following:

The Dangers Of Consuming Off Tahini

If you do end up consuming tahini, it may not be the end of the world. However, you are likely to be at least slightly ill and suffer particularly from a stomach ache. That said though any off food can potentially cause minor or severe food poisoning. As such, especially if you see any signs of mold, gone off tahini should be avoided as in some cases they cause severe illness or even something like kidney failure.

As we’ve established above tahini can and will go bad. However, whilst this may happen quite quickly for organic or homemade tahini, in the case of most store-bought varieties this likely won’t happen for a while.

To maximize freshness though, keep your hummus in a cool and dry environment such as the pantry or refrigerator. Additionally, it should also be kept in an airtight container to help prevent mold growth.

Keeping the above in mind and being wary of signs of mold will help you to avoid the hazards of off tahini. Additionally, it will make what dishes you use it in will taste that much better, whether it’s as a condiment or with chickpeas in some homemade hummus.

How do you know if tahini has gone bad?

There are several ways that you can tell whether or not tahini has gone bad or not. Typically this will be via an off smell or taste, a significantly hardened consistency, and/or the presence of mold.

Is it OK to eat expired tahini?

Tahini can still be safe and delicious for roughly four to twelve months after the expiration date if unopened, with it lasting longer in the fridge. However, organic or homemade tahini will likely not last nearly as long and should be consumed within a week if refrigerated.

How long is tahini good after opening?

After being opened store-bought tahini should be eaten within four to twelve months if stored properly in the pantry or refrigerator.

Does tahini need to be refrigerated after opening?

Whilst some people prefer tahini to be refrigerated, it is certainly not compulsory after it has been opened. However, it will likely remain safe to eat for longer than in the pantry.

How To Cook Eggs In A Toaster Oven: 3 Easy Ways