How Long Do Ice Cubes Take To Freeze? (And Why!)

Ice cubes are one of those things that everyone knows how to make. Just fill an ice cube tray with water, whack them in the freezer and wait for it to freeze. On most days you probably don’t even think about how long it takes. However, when you’re low on ice at the wrong moment, such as when you have company coming over, you may find yourself asking how long do ice cubes take to freeze?

How Long Does It Take For Ice Cubes To Freeze?

Ice cubes on average will take between three and four hours to freeze if frozen in a normal freezer in ice cube trays. However, like with freezing rotisserie chicken, how long water takes to freeze can vary slightly depending on certain factors.

Water will begin to freeze at 0°C (or 32°F) whilst on average most freezers are set to 0°F (or approximately -18°C). However, the time it takes for ice to freeze completely will mainly depend on how large the ice cubes you plan on making will be, along with their shape.

Another major factor is the exposed surface area of the ice. This is because water freezes inwards instead of outward. As a result, the more space there is between each ice cube, the more quickly each cube should freeze.

Additionally, whilst the intended temperature for your freezer should be roughly 0°F (or approximately -18°C) certain factors may make it warmer. For example, if you leave the freezer door open when filling your ice cubes, the interior temperature will change. As a result, it will have to cool once more before your ice cubes can fully freeze.

Can Ice Be Frozen Quicker?

There are a few techniques you can employ if you want to freeze your ice cubes more quickly. Each method will quicken things up on its own. However, for the best results, using them in tandem is possible. However, for the ice to freeze more quickly it is important that you leave it undisturbed as the heat from the outside air and your body will inevitably delay the process.

When really in rush a method you can employ is to turn the temperature of your freezer to a colder than normal setting. Doing so will force the molecules in the water to condense more quickly, therefore freezing the ice at a faster rate. However, when they’re ready, you’ll want to change the setting back in order to avoid the rest of your freezer contents from freezing even more.

Another method that can be used in tandem with the first is to use stainless steel or metal ice trays. Whilst they may be slightly more expensive than a standard ice tray, they will be excellent for freezing ice quickly. The reason for this is that stainless steel is a poor heat insulator meaning that any heat from the water will be more likely to escape.

The final trick might seem somewhat counterintuitive but bear with us. Instead of filling the ice cube trays with cold water, use hot water instead. Whilst we know this sounds strange, it is in fact true that hot water freezes faster than cold water.

Why Does Hot Water Freeze More Quickly Than Cold Water?

As mentioned above, contrary to popular belief, hot water will freeze much more quickly than cold water. Naturally, this seems to go against what many would see as common sense. However, surprisingly enough people like Aristotle have been claiming this for centuries and it has turned out to be true.

Despite claims that this phenomenon has existed for hundreds of years, it was only proven in the 1960s. This was proven by a Tanzanian high school student by the name of Erasto Mpemba who experimented with the idea with the help of a teacher. Following this, the phenomenon was dubbed The Mpemba Effect.

The Mpemba Effect – How Does It Make Ice Freeze Faster?

How The Mpemba Effect works is the subject of some debate but the most commonly held belief is that the creation of currents and gradients within warm water helps to release heat into nearby airspace more efficiently. Therefore the water will start to form into ice crystals and reach its freezing point even more quickly.

However, there are some other theories regarding how The Mpemba Effect works. Some of these include the following:

Using An Ice Maker Instead Of Traditional Ice Cube Trays

There is an alternative to using ice cube trays and a combination of different tricks to make ice quickly. This is to simply use an ice maker instead. As the name suggests, an ice cube maker is a specialised piece of technology that is specifically designed to create ice cubes.

The way this is accomplished is by directly exposing the metal ice tray containing the water to the cold metal coils. This means that the ice will ultimately freeze much more quickly than it would in an ice cube tray in the freezer. The time difference is actually quite sizable as well as ice makers will often cut the time required down to an hour and a half, instead of the typical three to four hours.

The downside, however, is that ice makers are yet another single-purpose kitchen appliance that takes up precious countertop space. Additionally, they are also far more expensive than an ice cube tray. 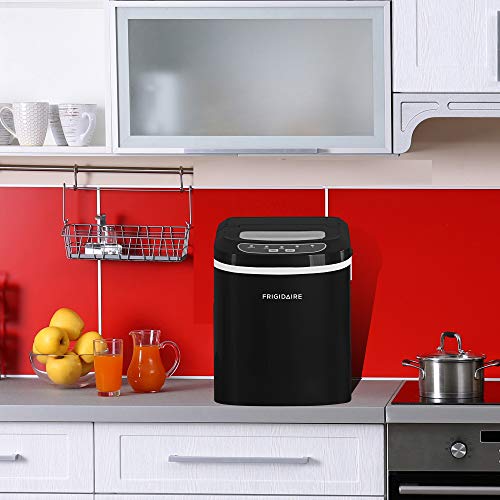 Answered: How Long Do Ice Cubes Take To Freeze?

When frozen in the freezer in an icecube tray, ice cubes will take roughly three to four hours to fully freeze. This time can be reduced by employing a few techniques such as using metal ice trays, turning down the temperature of your freezer or exploiting The Mpemba Effect.

Alternatively though, it is more convenient and quicker to use an ice maker as they can reduce the time required to under half. That said, however, they will also be more expensive than using ice cube trays and take up space in your kitchen.

FAQ’S – How Long Does Ice Take To Freeze?

Ice cubes can be made to freeze faster in a number of different ways, these include:
Using Metal Ice Cube Trays
Freezing hot water instead of cold water to employ The Mpemba Effect.
Turning your freezer down to a colder temperature setting.
Not opening your freezer for at least three hours.
Keeping the freezer door open as little as possible.
Using an ice maker instead of a freezer.

Thanks to the Mpemba Effect, hot water will indeed freeze much faster than cold water would.

How can I freeze something faster?

This can depend on what you’re freezing but a tried and true method for anything is to turn the temperature setting of your freezer down temporarily. For ice, the Mpemba Effect of freezing hot water will oddly make it freeze quicker. Meanwhile for meat, sealing it in a ziplock bag and immersing it in salted water will make it freeze much quicker.

How much faster does hot water freeze?

It will take roughly just over half the amount of time for hot water to freeze as it would cold water. However, this is only so long as the internal temperature of your freezer remains at 0°F.

How to Thicken Beans: 4 Easy Ways You Can Do (A Guide)

How to Bake a Potato in a Convection Oven?