How Many Cups Are In A Can Of Chicken Broth? 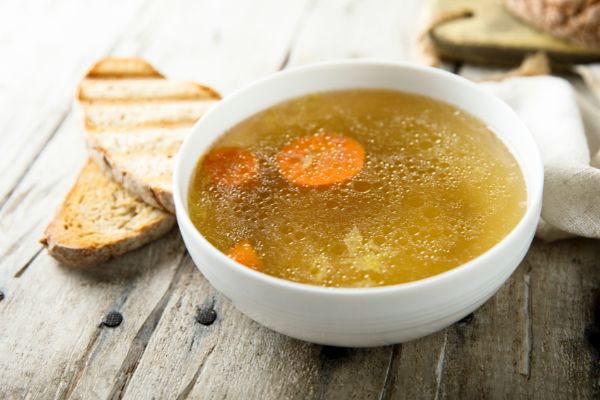 Chicken broth is an incredibly popular ingredient bought from supermarkets and it can be used in so many different recipes. Sometimes as the main ingredient, other times as a little boost to help flavor a sauce or soup. Chicken broth can also be used as the main template for a broth, with the complexities being added in later. There are a lot of companies that sell canned chicken broth in supermarkets, although, they do not say how many cups of chicken broth there are in their cans. This can make recipes a bit tricky as you have to convert the measurements. Thankfully for you, that’s what this article is all about; helping you understand more about chicken broth.

What Is Chicken Broth?

Chicken broth is the by-product of cooking chicken and vegetables alongside seasonings in water. This light and complex liquid can be consumed on its own as a drink or can be added to other recipes and dishes. Saving some chicken broth is quite helpful as it means you will have some on hand should you need it for a recipe.

Chicken broth is very commonly confused with chicken stock, for obvious reasons. Chicken stock is almost the same liquid but is a lot thicker and has been simmered with the bones from a chicken. This adds gelatin and collagen from the bones into the liquid which is what makes it so thick. The gelatinous layer that forms whilst cooking might seem off-putting at first, but if you keep it and reintroduce it later when you heat the stock up again, it combines with the stock and adds a very rich and concentrated flavor filled with umami. Chicken stock is very low in sodium and can be used in more ways than chicken broth although, both have their uses. Chicken broth and chicken stock can be made super easily at home, you will only need a few household ingredients and a good stockpot.

An incredibly similar product is known as beef broth. This is the exact same as a chicken broth but instead of being cooked with chicken, different parts of beef are used instead. Both broths have different uses as the flavors are quite different, and both can be enjoyed warm as a drink. Beef also has a stock that is the same as chicken stock as in it is thicker, more gelatinous, and has a much more concentrated flavor,

How Many Cups Of Chicken Broth Are In A Can?

As a lot of different companies sell chicken broth, the sizing of the cans may vary. The average size of a can, in this case, the Swanson chicken broth, is 14.5 oz. Chicken broth is roughly just as dense as water, which means in a can of 14.5 ounces, there will be 1.8 cups of chicken broth. Both companies; Swanson Natural Goodness Chicken Broth, and Chicken Bouillons: Grocery and Gourmet Food seem to have similar sizes in their cans.

While it would be unrealistic to measure every single brand of chicken broth and mention how many cups are there, it would be a lot easier to get a conversion rate of ounces to cups. Every can from every company will have a weight marked on the can in ounces, this can help you convert fl oz – cups. One cup and one-eighth of chicken broth are 14.5 fluid ounces, which leaves you with an easy formula for finding what 1 cup would be in fluid ounces. To save you the trouble of doing the math required to figure this out, I have done it myself. In one cup of chicken broth, there is 8 fl oz. This means that when you are walking around the store and looking at the different cans, you can divide the overall weight of the can in ounces by 8 and you should have a rough estimate of how many cups there are.

While the canned chicken broth and chicken broth in cartons can have a very long and stable shelf life, once exposed to air and the seal has been broken they start to go off. This can leave you with up to only 5 days until it is recommended to no longer use the broth. To keep it fresher for longer it is advisable to store it in an airtight container once the can or carton has been opened. A simple Tupperware container will be enough to help it last for longer but no matter how well you think you have stored it, once it is removed from the original packaging you should use it within a week.

How many cups are in your cans all depends on how many ounces are in them. 1 cup is equivalent to 8 fl oz so the cup quantity can be found rather easily by using a calculator on your smartphone or by doing some mental math. Most canned chicken broths will have 14.5 ounces in them which is 1.8 cups. The approximate density of chicken broth is very similar to water, so that can help you figure out the quantity as well. It is quite rare that a recipe calls for more than two cups of chicken broth, so as a general rule of thumb maybe buy two cans of chicken broth and worry about the oz to cup quantity when you get home and have access to measuring cups.

How many cups are in a standard can of chicken broth?

The density of chicken broth is very similar to that of water. So we can assume that the ratios would be the same and 14 ounces of the chicken broth would be just under 2 cups at a precise 1.8.

How many fluid ounces are in a can of chicken broth?

All brands of chicken broth will have a measurement on them that shows what the product weighs. Once you find how many fluid ounces are in the can, you can convert this to see how many cups are in there.

Should you microwave toaster strudels?

What to serve with ravioli? 14 Delicious Side Ideas

How Long Does Banana Pudding Last?