Can You Reheat Fettuccine Alfredo?

Fortunately, so long as you have stored your leftover pasta and alfredo sauce it is perfectly possible to reheat it to enjoy at a later date. In fact, due to people often misjudging how much pasta to cook or sauce to make, it is often a necessity to store the leftovers away for later use.

Before you ever get to a stage where you would need to reheat alfredo sauce or leftover fettuccine alfredo as a whole it is important to know how it is best to store it. This is because there is no point in storing your leftover pasta and cream sauce if doing so will make them inedible later on.

Like with any other food of this nature it is of vital importance to not leave your leftover fettuccine alfredo on the countertop for more than a couple of hours. This is because within this time any airborne bacteria or bacteria already present in your alfredo pasta will multiply. Eventually, this will reach a point where the food becomes potentially hazardous to eat.

Whichever storage method you choose though it is important to use proper containers when storing it. The most important thing is that it is sealed in a manner that is airtight. As such using Tupperware containers is best. However, in a dish covered in plastic wrap or aluminium foil will also do the trick.

When looking for methods to reheat fettuccine alfredo you may run into an issue of not being able to find a way that is practical for you. Whether, it is due to lack of equipment, the quality of the reheated leftovers or simply the amount of time taken for them to work, there can be a great many reasons why a particular reheating method may be impractical. Fortunately, though, there are plenty of methods that you can use to reheat fettuccine alfredo:

The process for each of these methods will vary in complexity along with the quality of the final results. However, depending on your requirements one or more of them may be better suited than the other options.

Reheating Fettuccine Alfredo In The Oven

The process of reheating fettuccine alfredo in the oven is the best way to reheat most popular pasta dishes in a way for it to cook evenly in a simple way. This method is relatively quick as well and unlike some other methods, using this technique to reheat pasta is less likely to negatively impact your alfredo sauce.

When doing so use a baking dish or some other form of oven-safe container. However, if using pyrex that has been in a cold environment it is crucial that you allow it to adjust to room temperature before putting it in the oven to avoid thermal shock.

Additionally, in order to make the alfredo sauce creamier, it is important to add a few drops to a tablespoon of water in order to reintroduce some moisture to the dish. This shouldn’t be a lot of liquid, however, the amount of water you add will depend on the quantity of the fettuccine alfredo.

With that in mind, to properly reheat fettuccine alfredo in the oven your should the steps outlined below:

With these steps followed your delicious meal will be ready to serve and eat. 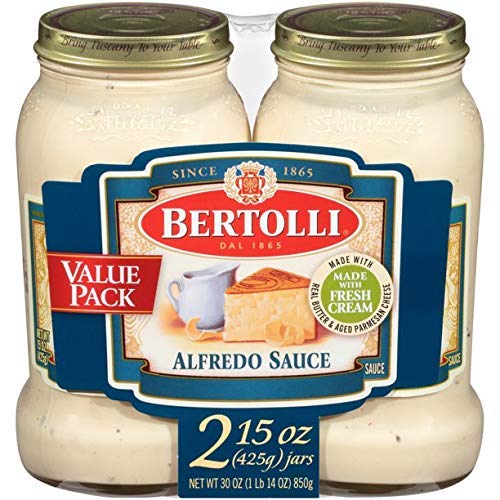 One issue you may encounter when you reheat your fettuccine alfredo is that the sauce and pasta may have become separated. This can happen either because of the cold of the fridge or freezer or even because of the thawing process though.

Obviously, this is not desirable as the combination of pasta and sauce is part of what makes this dish so delicious. Fortunately, though, there is an easy way to reheat fettuccine alfredo in such a way where the sauce thickens once more and is, therefore, able to recombine with the pasta. This is to use the stovetop

Inevitably, this will take longer to produce reheated and cooked food. However, the final result is much better and this method is still quite simple. Although it requires more attentiveness.

To reheat fettuccine alfredo on your stovetop, adhere to the directions below:

Once the fettuccine alfredo begins to look cooked it is then time to remove it from the hob and serve it.

Reheating Fettuccine Alfredo In The Microwave

Whilst other methods may produce better results when reheating your fettuccine alfredo, using the microwave is by far the quickest method. As such, it is by far the best method to use if you are really in a hurry or just absolutely starving.

When using the microwave it is important to always use a microwave-safe dish and cover the filled dish with plastic wrap. Following which it should be pierced a few times to allow air to escape.

Additionally, to replicate the texture and taste of fresh fettuccine alfredo, you should cook for a minute before removing adding some drops of water. Following which you can return the fettuccine alfredo to the microwave.

To effectively reheat fettuccine alfredo in the microwave, follow the steps listed below:

This is a slightly unusual method of reheating fettuccine alfredo as it does not strictly speaking use a direct heat source to heat the pasta. Instead, it relies on the heat of a hot water bath that is resting on a stovetop.

This method can take a while to heat your fettuccine alfredo and is probably the most complex, due to both the set-up and the process itself. However, you will likely find that it also produces the best results as the slow heat will allow your pasta and sauce to combine in the best way possible.

For this method to work effectively, you should follow the steps outlined below:

Answered: How to Reheat Fettuccine Alfredo?

When it comes to reheating your fettuccine alfredo you have plenty of methods to choose from. If after the best results then the water bath method is what you need to use, however, it will likely take much longer than the others. Meanwhile, the microwave will be good in a rush but is likely to produce inferior results, with the oven and stovetop techniques sitting somewhere in the middle.

Ultimately, your decision will likely depend on factors such as convenience, time and equipment available though. As such, you should rest assured that no matter how you choose to reheat your fettuccine alfredo, it will still be delicious.

FAQ – How to Reheat Fettuccine Alfredo?

How do you reheat fettuccine alfredo?

Fettuccine alfredo can be reheated in several ways. However, four of the most effective include the oven, microwave, stovetop or over a water bath.

How do you keep Alfredo sauce from separating when reheating?

Alfredo sauce can be prevented from separating by adding a few drops of water to ensure that there is moisture in the dish. Additionally, it is important to stir it to help the sauce remain thick and creamy.

Can Alfredo be reheated?

Fettuccine alfredo can be reheated in a few different ways. Typically though, the four most effective ways are the oven, microwave, stovetop or over a water bath.

What to Eat With Butternut Squash Soup? 14 Delicious Sides