Many people are initially cautious about how oven safe pyrex is. However, once they get more comfortable using pyrex it often becomes a regularly used piece of cookware. That said though another question that has more of an unclear answer is the maximum oven temperature that glass bakeware like pyrex can reach. So what is the pyrex heat limit?

Pyrex glass cookware whether made from the newer soda-lime glass or older borosilicate glass is perfectly safe at most hot oven temperatures. This is true for both conventional or convection ovens. However, exposure to direct heat sources like toaster ovens will likely cause damage to pyrex cookware.

Damage can also be caused by sudden temperature changes such as by pouring cold liquid on a piece of hot glassware or putting a hot glass dish directly in the fridge or freezer. The same is true the other way around such as when a cold glass dish is placed in a hot oven.

The reason this happens is because of a phenomenon called thermal shock. Thermal shock is when an abrupt change in environment leads to a sudden temperature differential within the glass dishes in question. Due to glass expanding in heat and contracting in cold, this sudden change can put great strain on the glass in question. As a result, this makes pyrex glassware susceptible to damage, as even tempered glass can become shattered glass in this scenario. 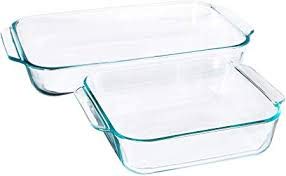 Putting Pyrex in the Oven

As mentioned above, Pyrex glassware is perfectly safe for use in the oven. As such it is perfectly suitable for heating and reheating food. However, as is engraved on pyrex products they are only considered to be “preheated oven safe”.

This is because the uneven heat distribution in an oven before it is heated can cause thermal shock in pyrex products or glassware. As a result, this may lead to a cracked or exploded piece of cookware. With this in mind, it is important to remember that pyrex should only be used in a preheated conventional or convection oven.

What Is The Pyrex Heat Limit?

The pyrex heat capacity is something that has been debated for many years with various anecdotal answers being provided by users of pyrex bakeware. However, certain factors that may influence these answers could influence these results.

These factors can include such things as whether it was used in an oven preheated to the appropriate temperature or whether thermal shock occurred.

As a result of these external factors, it can be difficult to put a precise number on the maximum heat pyrex can withstand baking. Additionally, this problem is exacerbated by the fact that pyrex themselves aren’t too clear on the subject, stating that pyrex can be used at any temperature that is called for when baking a recipe.

Despite the unclear nature of how high a temperature you can cook in pyrex, there is somewhat of an accepted, albeit unofficial answer to this question.  For typical oven use, the maximum recommended temperature according to most people is around 450°F (or roughly 230°C).

However, as this is mostly anecdotal advice, it may be best to err on the side of caution and cook at a slightly lower temperature. As such when using pyrex cookware, many people will instead cook at a maximum temperature 425°F (or 218°C).

Can Pyrex Go Beyond Its Heat Limit?

Although popular wisdom states that pyrex should be used between 425°F and 450°F at most, there is an alternative temperature set of temperature limits you could go off of. A Pyrex glass pan could, in theory, endure temperatures of up to roughly 932°F (or 500°C).

Obviously, this is an extremely high heat when compared to the prior stated figures and there is a reason for this. This reason is that these are temperatures that lab glassware made from the same materials as pyrex has withstood.

That said, it has been observed that over 500°F you are more likely to see pyrex crack or shatter. As such, when possible it is recommended to stick below this number and avoid extreme temperature changes.

Protecting Pyrex Outside the Oven – How To Prevent A Pyrex Shatter

To prevent a pyrex glass from breaking upon taking it out of the oven is quite simple to do. All you really need to do is be conscious of how thermal shock can happen and take some simple steps to avoid it. Some examples of what you can are listed below:

When using pyrex in cooking it is best to stick to around 425°F to 450°F for the mos part as your glassware will likely be safe at this temperature. However, if necessary you may be able to cook at slightly higher temperatures since pyrex can in theory withstand over twice this heat. That said though, the more extreme the temperature you subject the pyrex to the more likely it will suffer damage. As such staying under 450°F is probably safest.

Outside of the oven, you should also take steps not to abruptly change the temperature of pyrex. This is because the thermal shock of doing so will likely cause pyrex to crack or shatter. Instead, pyrex should be allowed to cool or heat up more gradually.

Why did my Pyrex dish explode in the oven?

When pyrex explodes, this is because of a phenomenon called thermal shock. This thermal shock is often caused by sudden and extreme changes in temperature.

How do you stop Pyrex from exploding?

Pyrex will explode due to a phenomenon called thermal shock. This is where strain is put on the glass due to a temperature change causing it to rapidly expand or contract. As such, to avoid this, pyrex should always be allowed to heat and cool down at a much more gradual rate.

Can I bake in a Pyrex glass bowl?

You can bake in a pyrex glass bowl perfectly safe so long as you don’t subject the glass to any extreme changes in temperature. For example, don’t transfer straight from a cold fridge to a hot oven. Additionally, pyrex should always be used in a preheated oven to further reduce the likelihood of cracks or other damage occurring.

Is it OK to put cold pyrex in the oven?

Cold pyrex such as that from the fridge should never be put straight into the oven. This is because the sudden temperature changes associated with such an action can cause thermal shock, a phenomenon that can make glass shatter or crack.

Rice Krispie Treats Expiration Date: What You Should Know!