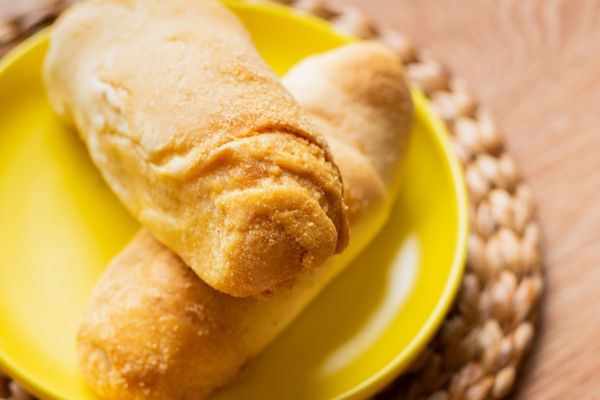 This delicious Spanish bread roll is a fantastic treat, with a plush, golden brown exterior, brimming with a sweet buttery breadcrumb filling, finishing with a layer of sprinkled crumbs for an impeccable crunch. Perfect for breakfast, lunch, or as an evening snack, let’s take a look at how we can make this brilliant Filipino Spanish bread recipe.

What is Senorita Bread?

Senorita bread is a small pillow soft Filipino bread roll made from enriched pastry. Traditionally these bread rolls are loaded with a mouth-watering filling consisting of butter and brown sugar, then encased in crunchy bread crumbs and baked in the oven till beautifully golden brown.

Despite these bread rolls originating from the Philippines, they’re often referred to as Spanish Bread. This is mainly due to the idea of possible inherent bread baking techniques obtained from Spanish kitchens. Filipino Spanish bread has gained immense popularity worldwide, thanks to Starbread bakery.

Starbread bakery initially opened as a small bakery in California, where the steamed trays of hot Spanish bread wafted to unexpecting pedestrians, who followed the sweet smell all the way to the humble doors of Starbread bakery. Soon enough, with its rise in popularity, the bakery was able to expand to five distinct locations in California, including South Sacramento, available for many.

This mouth-watering Filipino Spanish bread is small and soft, made with the simplest ingredients that are most likely hanging about in your pantry. A single senorita bread roll contains 246 calories, so if you’re following a certain diet plan, you may want to adjust the amount of butter or sugar to accommodate this.

Here are some of the main ingredients you’ll need to bake:

How to Store Senorita Bread?

You can store your Senorita bread on the kitchen counter for up to 3 days; just make sure they remain covered to avoid them drying out. Alternatively, you can place the Spanish bread rolls into an airtight container and refrigerate them for a week. Refrigerating the rolls can give them a tougher texture, but this is easily fixable. Simply pop them into the microwave for 10 to 12 seconds, and they’re good enough to eat!

Can You Freeze Senorita Rolls?

Once the bread rolls have cooled completely, you can freeze them in a reusable freezer bag for up to 3 months. Whenever you plan to eat them, let them thaw in the fridge. Or reheat them in the microwave.

How to Serve Senorita Bread

Senorita bread can be served on its own as a delicious snack during a party, along with some hot tea or any other beverage of your choice. Personally, I’ve found that this delicious Filipino bread pairs well with cold fruity juices

Many recipes require some tips in order to achieve perfection. Here are some tips for the ingredients required in this Filipino Spanish bread recipe:

What Type of Yeast

When you’re at your local supermarket trying to figure out what type of yeast to go for, you’ll probably have to choose from Instant yeast, Active yeast, and Fresh yeast, with each requiring a distinct approach when baking. If you’re looking for a type of yeast that requires no further actions, then choose Instant yeast. Just pour the contents into the recipe, and you’re good to go.

Active yeast and Fresh yeast both require blooming, so for the senorita bread recipe, dissolve the yeast in some milk and let it rest for 10 minutes until it begins to bubble.

With many first attempts there comes little accidents, which only make the next attempt exceptional. When I first made this Señorita bread recipe, my rolls had burst once they had emerged from the oven, oozing sweet paste. To avoid this happening, avoid rolling the dough till it’s thin, as this can heighten the risk of tearing. Also, ensure that your dough has been proofed for long enough before baking so that it has a better chance of rising.

The traditional Filipino Spanish bread recipe is made with lots of butter in the dough, with margarine in the filling. Butter provides that moist deliciousness, while margarine is much easier to spread. What do you think?

Señorita bread is a traditional Filipino recipe consisting of delicious sweetened bread rolls that are quite simple to make. You can use this recipe as an initial try at baking Spanish bread before going off to experiment with other versions for future bakes.

What is Senorita Bread Made of?

Essentially, senorita bread is small oblong rolls, made of enriched bread dough coated with butter, sugar, and breadcrumbs. The dough is then rolled up, sprinkled with sugared bread crumbs, and baked.

Where is Senorita Bread Made From?

Senorita bread is Filipino bread and is commonly referred to as Spanish bread.

Starbread is a family-run Filipino bakery with seven locations around Northern California, some of which happen to operate 24 hours a day.

Why do They Call it Spanish Bread?

Many wonder why Filipino bread is also called Spanish bread, and this is because Filipinos had adopted bread making from Spanish kitchens; developing a variety of shapes and fillings of this bread.

Why is Le Creuset So Expensive Compared to Other Brands?

How Much Rice Per Person? What You Need To Know!

Is Lobster Halal? Everything You Need to Know!