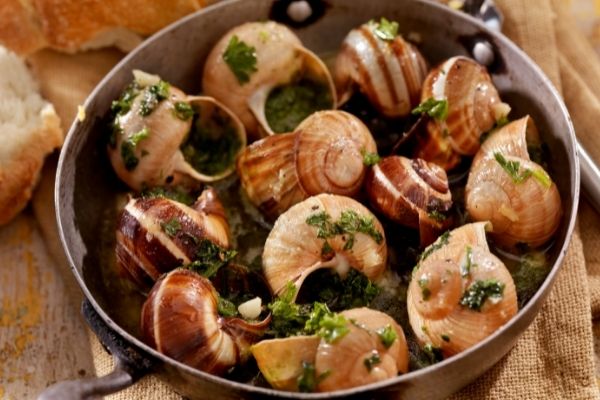 If you aren’t too familiar with French cuisine, the idea of eating snails might seem very strange. But this snail-based dish, often served with buttery sauces, is a great upscale starter dish. But before you go out to try some, you probably want to know: “what does escargot taste like?”

The word “escargot” comes from the French word for “snail.” It’s accurate, as escargot is essentially snail meat served in the shell. Not every snail species can be used for escargot. The snails served are always typical land snails, but many species are too small to prepare. The most commonly used species is Helix pomatia.

In most cases, escargot recipes ask you to remove the snail meat, cook them, and return them to the shells. They usually are cooked in butter, and the included herbs usually include garlic and parsley.

So before you take the trouble to make an entire batch, how does escargot taste like?

The escargot flavor can be hard to capture in words. Snail meat taste different from other seafood, but the closest comparison would be mussels or clams. Snails cooked with no seasonings taste bland, and some people even compare the flavor to chicken. Some snails will have a slightly earthy flavor — they have sometimes been compared to mushrooms.

The texture of course influences flavor and snails have a texture that’s a lot different from that of other meats. Edible snails have a gelatinous texture. If you’ve ever seen backyard snails, you may have noticed that their bodies look gooey. When they are cooked, the snails get a little harder. Think of an egg — it’s watery in the shell, but cooking it creates a new texture.

The exact flavor will vary depending on how you prepare escargot. We mentioned that it tastes somewhat bland on its own, but that makes it a great flavor canvas for other ingredients. Escargot is usually served with rich sauces, and the snail meat easily takes on these flavors. Many recipes used by French cooks call for butter, fresh parsley, garlic, and sometimes white wine.

Here’s a quick breakdown of the most common ingredients snails are prepared with:

Parsley — Parsley isn’t the strongest herb out there. Some people even describe it as tasting like a watered-down version of mint. However, it’s a nice complement to butter. Parsley serves as a complement to the butter. But in some cases, it’s part of a multi-herb pesto that’s served on the snails along with butter.

Garlic — The strong flavor of garlic may seem to be at odds with the bland flavor of snails. But when garlic is cooked in broth along with the snails, the flavor seems to distribute itself more evenly. The result is a balanced overall taste that adds another flavor note to this interesting and unusual dish. Some chefs may try to emphasize the garlic more, but most try to keep it somewhat subtle.

You already know that people eat escargot in France. But this dish has been around for a very long time; some archaeological digs have found evidence that snails have been eaten since prehistoric times. Ancient Romans also ate snails, and they were considered to be a delicacy.

Though you might think only the French eat snails in the present day, you might be surprised to hear that escargot is a major part of the cuisine in much of the Mediterranean — you can often find it in parts of Greece, Malta, Cyprus, and Crete.

The Manipur and Naga people of India also regularly eat escargot, and the dish is a common one in Morocco, Algeria, and Tunisia. Outside of these areas, snails are also eaten in Great Britain, Germany, Italy, Spain, and Portugal.

Though the species is different, snails are used for food in Asia as well. However, the snails eaten in Asia are apple snails. Apple snails are freshwater snails as opposed to land snails.

While escargot is more of an appetizer than a hearty meal on its own, it actually has some real health benefits! Three ounces of escargot (without the sauces, many of which add a good bit of fat) has about 76 calories. But you might be surprised to hear how much protein is in them — each serving includes an impressive 14 grams of protein! For such a small dish, escargot presents great nutritional value.

Escargot is low in fat and has a very tiny amount of carbohydrates. This delicious dish also includes several healthy micronutrients. They include vitamin E, zinc, iron, and calcium.

How Do You Cook Escargot?

If you’re wondering “is escargot good?” you probably don’t want to make yourself a batch just to try it out. Learning to properly cook snail can take years to really perfect.

That said, you might be interested in what goes into cooking escargot. The most interesting part of preparation is “purging.” A snail’s digestive system may contain a toxic substance, as there’s no way to really determine their diet.

Chefs and others who prepare snails will usually either stop feeding them for 7-10 days or feed them things that agree with the human digestive system. This process helps remove everything from the snails’ natural diet from their systems. It will usually make the snails taste a lot better.

After this step, you can clean the snails to continue preparing a dish. Here’s a quick look at the steps to clean snails for cooking:

Cleaning each snail takes time, but it’s well worth it. How you cook the snails depends on what dish you’re making. But in traditional French cuisine, the snails will be killed, removed from the shell, and cooked.

Often, the cooking happens in a sauté pan. Chefs will almost always add butter, but the snails can also be cooked in chicken stock or white wine. The shells are filled partially with a rich sauce, and the cooked snails are replaced in the shells to be served.

How Do You Eat Escargot?

When French people eat snails, they usually use a specialized utensil to hold the snail shells. There is also a small fork to remove the snail from the shell.

To see a visual guide to eating escargot, check out this helpful video.

Of course, this is the main way of eating snails in French cuisine, Many other cultures have eaten snails for centuries, and some restaurants may prepare escargot in a different way. You may find sauces made by putting snails and other ingredients in a food processor to make a smooth paste.

You may also be able to find a dish made with fried or grilled snails. Some places also offer snail kebabs or snail soups.

Should You Try Escargot?

The distinct flavor of escargot probably isn’t for everyone. But if you want to know the answer to “what escargot tastes like?” this signature French dish might be worth trying at least once in your life.

What does escargot taste like? Some people might say it tastes like dirt. Fresh snails do have a faintly earthy taste. But when prepared well, escargot tends to take on the flavors you cook it with. Many people compare the taste to mussels, clams, or even chicken.

Is escargot supposed to be chewy?

Yes, but not extremely chewy. Much like mussels and clams, snails have a somewhat chewy texture, but you shouldn’t need to chew escargot excessively.

What To Serve With Chicken Pot Pie?

How Long Can Smoked Salmon Sit Out (Answered)

Can You Eat Bread on a Keto Diet?