What does fish sauce taste like? 7 new ways to use it! 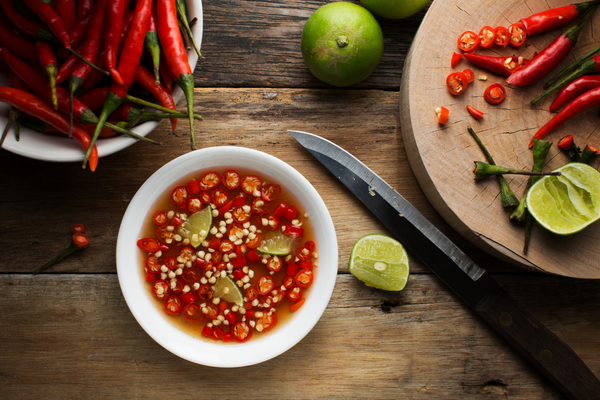 Fish sauce is salty, savoury, and earthy in flavour with hints of umami. It also has a touch of sweet, and hints of tanginess and has a runny consistency. Though most brands have their distinct similarities, there are a few tiny differences in the taste of fish sauce depending on where it is manufactured. The fish sauce flavour is oddly strong, which is why it should be used in small amounts, and gradually in dishes. It is often used with lime juice and other ingredients, to balance out the strength of the flavours and aroma.

Because of its strong umami flavour, fish sauce effectively aids in enhancing the flavours of different dishes and has been widely appreciated by chefs and home cooks. Fish sauce can be used as a seasoning and as a base in dipping sauces. Some may argue that fish sauce though smells like the ocean, happens to taste better than any dressing you’ll find on your local supermarket shelves.

Fish sauce is made from tiny fermented fish, such as anchovies because this fish sauce has a briny fishy taste, that goes brilliantly with meats as a flavouring. Although the dominant flavour of fish sauce is fish, it has a sweet, salty and pungent taste, therefore enhancing the flavour of a dish without giving it a strong nose wrinkling fish flavour.

What can we find wrong with a sauce that is made to elevate simple foods with its earthy, savoury, umami flavour profile, with its pungent fishy smell balanced out by a salty, briny, caramel-like sweetness?

Is Worcestershire Sauce the Same as Fish Sauce?

Fish Sauce is closely related to Worcestershire sauce, halal soy sauce, and oyster sauce, all of which are commonly used as substitutes. Fish sauce shares similarities in its umami flavours with soy sauce. Worcestershire sauce is a tangy, spicy and salty condiment, and is specifically based on anchovies as the main ingredient.

It can be used to enhance the flavour of meat and other dishes. Worcestershire sauce has some differences from fish sauce in the sense that it is a product of the fermentation process with various ingredients added such as molasses or sugar. Whereas fish sauce is produced from fermented fishes such as anchovy, herring, mackerel, or shrimp using salt-water brines.

What is Fish Sauce Used For?

Fish Sauce is typically used in Southeast Asian cuisine, mainly because of the intense umami flavours it adds to the dishes, and its ability to last for years without losing its perfectly delicious aromatic flavours. It is widely consumed in Thailand, Vietnam and China, it can be used in many varieties of foods such as:

Despite being a fish sauce, it happens to pair wonderfully with meats and brie!

Some people may label fish sauce as an offensive smell because they associate it with rotting seafood or seaweed upon the first encounter. However fortunately many have taken a strong liking to fish sauce and its strong aroma when added incorrect and proportional quantities to a meal, enhancing its already vibrant flavours.

Unlike soy sauce, fish sauce can also smell bad if the anchovies used as an ingredient were not freshly brought from the market, if you think about it, the smell and taste of fish is unavoidable as the process includes dried and ground decomposed fish turned into a paste with additives such as processed wheat.

What Fish is Used in Fish Sauce

The fish sauce starts with anchovies which are tiny fish that reside in the ocean. The anchovies are gutted then put into a barrel with salt to ferment for up to 2 years. The end product consists of approximately 50% water and 40-50% anchovy extract, along with other ingredients such as sugar and vinegar. Some brands may opt for shrimp paste types, but these are not a common occurrence. It’s a method of preservation of fish, fermenting salted anchovies with seawater, then straining the liquid to create a salty brown paste.

How Can You Use Fish Sauce?

Whilst we’re in heavy appreciation of fish sauce and its intense flavour, you only need a few drips for an extra bit of savoury flavour in your dishes. You can add it to stir-fries, braised meats, soups, marinades, pasta sauces, yoghurt dips, and other dipping sauces. It is exceptionally used in a Vietnamese dipping sauce – nuoccham. This sauce, is combined with sugar, lime juice, chillies, garlic, and finely chopped cilantro. This wonderful sauce pairs perfectly with salads, meats and roasted veggies.

Fish sauce is made by fermenting anchovies, whilst fish oil is extracted from the tissue of fish. It comes from oily fish such as mackerel, tuna, herring, anchovies or sardines. Furthermore, fish sauce has a strong fishy smell, whilst fish oil doesn’t at all.

Fish sauce is readily used in Asian cuisines, whilst fish oil is not used in cooking, as it is highly concentrated in polyunsaturated fats. Fish oil effortlessly stays good for several years, although it may darken and adopt partial concentration in flavour over the years. This is why it is advised to store your fish sauce in the fridge, especially if you live in a particularly humid climate.

Why Should You Use Fish Sauce?

If you are preparing a meal, that would have initially been plain, if you happen to have a bottle of fish sauce resting in your cupboard, simply reach for that magical bottle of flavours and allow it to enhance the flavours of your food. With its salty, savoury but tangy flavour fish sauce would be a perfect choice, especially to add to some plain packet ramen noodles.

The Taste of Fish Sauce

You probably know by now that fish sauce has an increased popularity rate amongst Asian cuisine, as well as slowly veering into European foods not just amongst normal people, but actual chefs use fish sauce as a key ingredient, it would seem that fish sauce is especially loved and famous for its umami, salty, savoury and earthy flavours. The more fish the sauce has depends on how intense the flavours are.

Some supermarkets may sell diluted fish sauce which will make the taste of the sauce different, compared to what would be considered high-quality fish sauce, which is fish sauce sold from the first batch of fermented fish.

To increase the flavour of diluted fish sauce, manufacturers often add excessive ingredients to balance out the taste and attempt to mimic the original taste of the high-quality fish sauce, this is commonly done by adding salt, water, sugar, monosodium glutamate, acetic acid, sodium benzoate caramel, etc. You will probably detect the difference in taste, as the diluted fish sauce will taste much saltier, and smell different.

The taste and smell of fish sauce deemed unpleasant has its magical way of transforming a normal dish into something bursting with flavours. A bottle filled with fermented fish can bring such delight! As with every new addition to a recipe, bravery is first on the list, of course, some of you will be gifted and bring forth perfection upon the first attempt, but as for the rest of us normal home cooks, don’t be afraid to make mistakes, because we both know that is how perfection is born.

Does Fish Sauce Taste as Bad as It Smells?

The smell of fish sauce has been compared with rotting seafood or sewage, however when used proportionally in foods, it gives an enjoyable flavour especially when cooked in curries. The smell of fish sauce can be overwhelming at the start, but once you learn how to use the ingredients sensibly you’ll develop a natural love for it.

What Is Fish Sauce Similar to?

Fish sauce is known to be quite similar in taste to Worcestershire sauce, but not identical. Soy sauce has a milder flavour compared to fish sauce, but can be used in place of each other if needed.

What Is Fish Sauce Used For?

Fish sauce is commonly used to boost flavours in noodles, roasted vegetables, or cooked meat. It can also be used as a marinade and dressing sauce.

Can You Spray Pam Directly On Food Safely?

Barilla Pasta Types: How Many Are There? (We Have The Answer)