What Does Goat Taste Like? 5 Delicious Goat Meat Dishes

Goat meat is a very popular staple meat in a wide array of countries around the world. From the Caribbean to Asia, Africa, The Middle East and even much of Europe, goat meat annually is enjoyed by a wide variety of different people and cultures. Naturally, each of these cultures has its own techniques from curry goat to cabrito asado. However, despite its near worldwide popularity, some regions such as Britain and The USA are hesitant to embrace goat meat. If you are from one of these regions and find yourself curious though, you may wonder, what does goat taste like?

What Type Of Meat Is Goat Meat?

Like meats such as pork, beef, or lamb meat, goat is red meat. Often, when people eat goat meat it will be prepared in a manner similar to that of either beef or lamb. However, most meat-eaters tend to compare goat to lamb more than other meats with some seeing goat as good cheaper alternative.

Some people, particularly those who are picky eaters may be put off by the strong smell of goat meat when compared to other red meat. However, the distinct and delicious tastes of cooked goat will often make people happy to ignore the smell.

Additionally, meat consumption, such as with pork, beef or veal can lead to many health complications such as cancer and heart. However, many find goat healthier than other meats as it is far leaner than other red meats and in some cases even chicken.

Many people also note how goat is particularly tender meat when compared to other red meat. This can vary of course depending on the age of the animal and the cut in question. However, this further leans into the comparison with lamb meat as both or typically more tender than pork or beef.

As one would expect, goat meat, as a type of meat is red. Despite this, upon seeing raw goat meat for the first time, the thing that most people will likely notice is that it tends to be more boney than other varieties of meat.

An advantage of this is that it makes noticing a good quality piece of goat meat much easier. The reason for this is that they will make any surface blemishes on the meat appear far more noticeable than they would on say something like beef or pork.

Unlike most red meat, the goat also tends to have a comparatively thick layer of skin/fat. When buying goat meat in grocery stores or in farmers markets, you should constantly scrutinize it for blemishes such as cuts or bruising, which are overwise obscured.

As mentioned above, goat meat will often have a much thicker layer of fat when compared to say something like beef. As such people will often assume that goat meat consumption is particularly bad for you as far as red meat is concerned.

This, however, is not the case since goat is low in fats like cholesterol, especially when compared to meat from other animals like beef. As such, whilst it may appear that beef has less fat content, the types of fat contained in goat meat are typically healthier.

Additionally, many people who haven’t tried goat believe that it will have an overwhelmingly gamey taste. However, whilst it can be slightly gamey, lamb meat is often quite mild in its flavouring. As such, whilst comparisons to deer meat are often made, typically goat meat is often seen as being more similar to lamb.

The Benefits Of Goat

Meat harvested from young goats tends to be quite mild and tender, however. Meanwhile, older goat meat tends to be tougher and richer in taste.

Most Goat Meat Cuts And How To Cook Them

Like with other sources of meat, goat can and often will be separated into different cuts of meat. Some of these will be reminiscent of cuts of other red meat animals, although naturally, they will differ in size and shape, along with texture and taste. 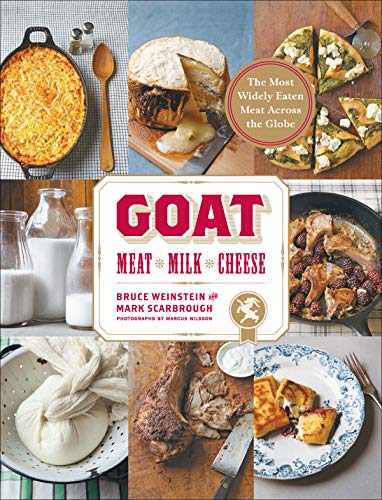 Goat leg is a fantastic cut when after a more fatty cut of goat. This is somewhat reminiscent of a leg of lamb, however, it is very much distinct in terms of texture and flavour.

This meat is quite thick but also incredibly tender. As such it is excellently suited for stewing or braising as the low temperatures combined with liquids it can become even more so. Additional methods include slow cooking or butterflying and grilling.

Be cautious of the length of time and how high the heat you cook it though. This is because if cooked at high temperatures for a long period of time the goat may end up being very dry.

This is portioned from the short loin between the back legs and rib of the goat. Loin chops are incredibly soft, as such, they are excellent for grilling or sauteing. This is especially true if marinated as the chops will soften even further and be given extra flavour. Additionally, they should be also cooked in butter or oil to make the meat particularly juicy.

Alternatively, they can also be roasted in the oven for a short period of time. No matter how you decide to cook them though, stick to medium heat at most.

Goat ribs will often be cooked in similarly to something like pork or beef ribs. However, whilst the results will not be as tender, many people consider them to be equally as delicious.

These will be ideal for grilling or searing in a pan. Although, if wrapped in tinfoil and cooked for long enough, you can get an excellent falling off of the bone texture like with other types of rib meat.

Shoulder meat tends to be a tough and inexpensive cut. For goat meat, this is no exception. However, just because it is a less expensive cut doesn’t make shoulder meat bad.

In fact, shoulder meat is particularly delicious when cooked in the right way. Typically this means marinating and cooking for a long period of time. Some good cooking options include slow-roasted goat shoulder or slow cooking, broiling or stewing it.

A great choice for a particularly tender and hearty meal which is ideal during cold winter months. Due to containing a lot of connective tissue, shank meat can be initially quite tough. However, when braised at low temperatures for prolonged periods the result is an incredibly tender and flavourful piece of meat.

This may seem a strange choice since there is less likely to be much meat on a goat’s tail. However, whilst the price and popularity of beef oxtail have soured in recent years the same isn’t necessarily true for goat oxtail. As such goat tail can make for an excellently flavourful and affordable substitute.

Goat meat is similar in many ways to lamb but is typically gamier and slightly earthy. Additionally, it will often be slightly sweeter and tougher than lamb, however, not to the same extent as something like beef.

Truly goat is an incredibly flavourful and versatile type of meat that can be used in anything from curries to burgers. Additionally, unlike many other delicious meats, goat is actually seen by many as being quite healthy and environmentally friendly.

So don’t be shy! Try goat meat as soon as you can and unlock a whole new world of exciting and delicious new foods.

What does goat meat have a similar taste to?

Goat has a somewhat similar taste to lamb although it is often more earthy and slightly sweeter. It is also slightly tougher which leads to comparisons with beef, although it is both much leaner and less tough or sweet. Additionally, it is also slightly gamey which leads some to compare it more towards something like deer or elk. However, none of these comparisons really do goat justice as it has its own distinct culinary identity.

Why do we not eat goats?

Goat meat is very popular in many parts of the world, however, the UK and USA seem to be two major exceptions to this fact. A lot of this comes down to misconceptions of it being unhealthy or not tasting very good due to it having quite a strong smell. As a result, many have a viewpoint that it is a low-quality choice of meat.

Goat meat is slightly gamey, as such comparisons will inevitably be made between it and deer. However, venison is significantly gamier than goat meat which if anything is closer to lamb in terms of taste.

Best Pizza Pan for Your Oven

What Do Oysters Taste Like? Everything You Need to Know!

How Long is Chinese Food Good For?