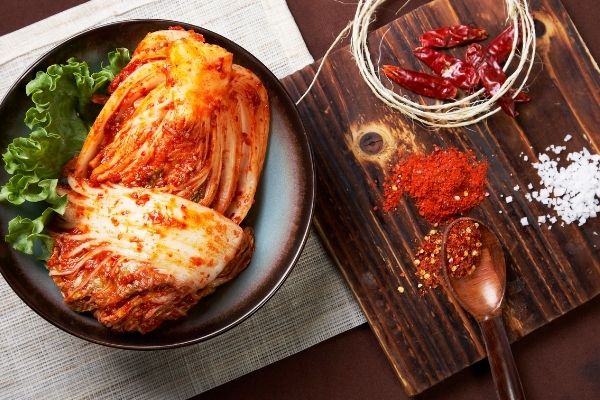 If you’re accustomed to Korean food, you’re already familiar with the ubiquitous kimchi. This distinctive, spicy mixture of fermented vegetables is served with almost every meal in Korea.

If you haven’t eaten Korean food but want to try kimchi, you might first want to answer a key question: what does kimchi taste like?

To understand how kimchi tastes, you’ll first need to understand what exactly kimchi is. This traditional dish is made of a variety of salted, fermented vegetables. Napa cabbage and Korean radish are commonly included, although different kimchi recipes may include different types of vegetables as well.

This fermented dish has been a Korean staple at least as far back as the Silla dynasty (57 BC – 935 AD). It wasn’t always a spicy dish, but more modern kimchi usually has a hot and pickled taste. That comes from the variety of seasonings used: Korean chili powder, fish sauce, salted seafood, spring onions, ginger, and garlic.

Before the dawn of refrigeration, kimchi was a great way to make sure that vegetables could be eaten year-round. Clay fermentation containers called onggi were buried underground in order to prevent the kimchi from freezing in winter and to prevent overheating in summer. Now, it’s a lot more common to use a special refrigerator designed specifically for fermenting kimchi.

Does kimchi taste good? If you’ve ever had sauerkraut, you have some idea of the tangy, sour flavor that comes with most types of kimchi. Both kimchi and sauerkraut are fermented. The sour flavor of both comes from the lactic acid produced by the beneficial bacteria as it ferments.

Kimchi has a strong sour flavor, but most varieties are also spicy. The level of spice varies drastically depending on the recipe. Most modern varieties include gochugaru, or Korean chili powder. Garlic and ginger will often add zing. Some especially spicy types use Indian mustard as well.

Some types of kimchi, especially those made with fish, also have a strong umami note. Jeotgal, or salted seafood, is a common additive. Some recipes call for saeu-jeot (salted shrimp) and/or fermented fish sauce.

Recipes that only include radishes, cabbage, cucumber, and other vegetables will usually be lighter and less sour. They’re especially pleasant in the spring and summer.

If you’ve never tried kimchi before, it’s probably worth mentioning the kimchi smell. If you’re familiar with Korean cuisine or otherwise used to fermented foods, you might not notice the smell.

However, any fermented food will have a strong smell or even an overpowering odor. The fermentation process produces hydrogen sulfide, a compound that can smell like rotting eggs. Some people seem more sensitive to the smell than others. But often, kimchi is an acquired taste, so it can take some time to get used to it!

What’s the Texture of Kimchi?

You now know the answer to “what does kimchi taste like?” So naturally, you’re probably wondering about the texture. Kimchi texture varies greatly depending on how long it’s been fermented and how long it’s been sitting in the refrigerator.

Fresh kimchi often has a bit of a crunch to it. Some people like it, as the crunch seems to add to the powerful flavor. But kimchi that has been around for a while will often start to get soggy. As long as it isn’t expired, it’s still perfectly good to eat. Depending on your individual tastes, you might actually prefer this type to fresh, crunchy kimchi!

Is All Kimchi Spicy?

Though eating kimchi originated in Korea, its often spicy and sour flavor is an acquired taste for many foreigners. So if you want to venture into cucumber kimchi, radish kimchi, or the classic version made with cabbage, you might want to ease your way into it with milder flavors.

If you don’t like very spicy foods, you might be relieved to hear that not all kimchi is spicy. Many non-spicy variants are somewhat briny and watery, and their taste is typically sour. If you want to add kimchi to your healthiest meals but want to avoid the fermented taste, you could try some of the relatively few non-fermented varieties. One of these is dongchimi, or kimchi made with plain cabbage, ginger, scallions, Korean radish, Korean pear, and pickled green chili peppers. How much pepper you include depends on your tolerance for spicy food.

The good news here is that not every kimchi recipe is spicy. However, depending on who you ask, you might hear that kimchi with an overly light taste has been watered down for foreigners. Some people believe that spicy kimchi is the most authentic.

Kimchi hasn’t just been a staple for centuries because it tastes good. It also has more health benefits than you might think:

It’s a probiotic – When kimchi ferments, Lactobacillus bacteria work to break down the sugars into lactic acid. When this happens, probiotics also thrive. Probiotics include various types of microorganisms that promote general health.

When you regularly consume probiotics, you may help protect heart health and gastrointestinal health. Probiotics also may boost the immune system.

It’s rich in vitamins – The cabbage and other vegetables in kimchi are rich in vitamin A, vitamin B6, vitamin K, and vitamin C. Vitamin A is useful for eye and skin health. It also may reduce your risk of some kinds of cancer.

Vitamin C is especially helpful when it comes to supporting immune system health. It also supports the absorption of iron and may help protect heart health. Vitamin B6 is useful for brain health and mental health, and it’s crucial when it comes to a number of metabolic functions.

Vitamin K doesn’t get the same amount of attention as most other vitamins. It’s crucial to bone health and the building of proteins.

It contains essential minerals – When you eat kimchi, you can enjoy the benefits of a variety of trace minerals. Fermented kimchi is high in calcium and potassium. It’s also a decent source of iron and magnesium.

In smaller amounts, kimchi also includes zinc, selenium, phosphorous, and choline. Keep in mind that each kimchi recipe is a little different, so the nutrient profile can vary significantly from recipe to recipe.

How Do You Use Kimchi in Cooking?

If you like mildly spicy foods with many health benefits, you probably know that kimchi tastes pretty good on its own. But how does kimchi taste when used in other dishes? Here are a few ways you can incorporate kimchi into your diet:

The pungent flavor of kimchi goes very well with the umami taste of fried rice. Most people think it tastes best with both kimchi and kimchi juice stirred in. But if you want less spicy pickle flavor, you may want to add chopped kimchi without the juice to your fried rice.

You can also add kimchi to steamed rice to give it a unique and powerful flavor. You don’t even need to steam kimchi with the rice; just stir it in after steaming! This is a great way to dilute the prominent flavor of kimchi if you’re just starting to get used to it.

Though kimchi has a powerful taste, it doesn’t have to be the most prominent flavor in a dish. In kimchi dumplings, it functions as both an ingredient and a spice.

To make kimchi dumplings, you just need to chop up the kimchi and mix it with your chosen dumpling filler (beef, pork, chicken, and tofu are some common choices). Wrap each dumpling in a pastry and steam or fry.

While it’s pretty good when eaten plain, kimchi also excels as a topping. You can eat kimchi as a grilled cheese topping, too. This is a great idea if you like grilled cheese but find most of these sandwiches to be overly bland.

If you’ve ever tried hot and sour soup, you have some idea of what kimchi jjigae tastes like. It’s a soup or stew often made in South Korea. If you have kimchi that has become very flavorful, kimchi jjigae can help dilute the flavor and make it more palatable.

Like the fermented cabbage side dish itself, kimchi jjigae can be made in several different ways. Most kimchi jjigae recipes include anchovies, pork belly, tofu, and kimchi. The warmth of the soup and the spicy flavors make it a great option for when you have a cold! Enjoy this flavorful soup with a side dish of steamed rice.

Kimchi’s flavor works beautifully in pasta sauce. It might sound strange, but you need to try it to believe it. First, chop some kimchi and caramelize it by cooking it with butter. Mix it with Korean red pepper sauce (called gochujang) and some kimchi juice.

How much red pepper sauce to add in depends on your taste. If you don’t want the sauce to be too hot, you can mix in some plain tomato sauce.

Kimchi Instead of Sauerkraut

Saurkraut has a pungent flavor similar to kimchi. If you want to add a Korean flair to Reuben sandwiches, hot dogs, and more, simply substitute kimchi for sauerkraut.

If you enjoy sushi, you may already know that some types of kimchi taste like the ginger often included with sushi rolls. If you’re making a spicy roll, kimchi can add some definite spice to the mix. It’s also a great addition to something basic (like a California roll) to add some more flavor.

Ramen noodles come in all kinds of interesting flavors. So why not kimchi flavor? It’s easy to cook your ramen noodles with some chopped kimchi. All you need to do is add the kimchi to the broth, bring it to a boil, and add the noodles. For some additional protein, you can add an egg, too.

Kimchi as a Garnish

Kimchi also excels when used as a topping for pretty much anything. Try it chopped up on top of a salad or placed it over pork medallions!

How Do You Make Kimchi?

The making of kimchi has historically been an important part of Korean culture. It’s now possible to purchase it in many parts of the world. But knowing the general process of making kimchi can give you a new appreciation for this memorable acquired taste.

First, cabbage or other vegetables are sliced in order to increase their surface area. The vegetables are then coated with brining salt, a large-grained salt that absorbs much of the water.

Once some time has passed, the water is drained away. This is when other seasonings like fish paste, chili peppers, or red pepper powder are usually added. Some people like to add rice vinegar or apple cider vinegar. This mixture is then placed in an airtight container for one to two days.

This is just a general breakdown — there are lots of different recipes out there, and each one is slightly different. If you want to see how kimchi is made, check out this video that shows you how one Korean restaurant makes it.

Adding Spice to Your Life

Whether you already love kimchi or are just an adventurous eater looking to expand your horizons, this distinctive food can be a great addition to your diet. Don’t worry if you’d rather avoid the sour taste — there are hundreds of kimchi varieties that range from hot and sour to sweet and mild. Try making kimchi fried rice, add some kimchi to the next roll of sushi you make, or just enjoy it straight out of the jar!

How To Dehydrate Peppers In The Oven?

What To Serve With Stuffed Peppers?