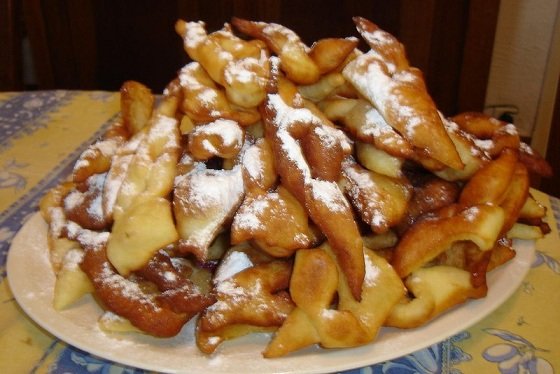 Bugnes are originally a culinary specialty of the Duchy of Savoie, which eventually extended to the center of France (found mainly in the area including Lyon, Rhône valley, Saint-Etienne and Franche-Comté). It is a small family of bakery donut-shaped.

History of the term “bugne”

The word bugne is francization of the term Bunyi (female) and just means the donut. Both words have the same origin, but the treatment in each language (ie Arpitan and French) is done differently. Today, the French regional word bugne specifies this particular type of donut while the French word ‘beignet’ means all other types of donuts.

The sixth edition, published in 1835, of the Supplement to the Dictionary of the French Academy, shows that it’s a feminine plural term, which it defines as follows: “It is called, in some cities in the south of France, of dough made with flour, milk and eggs, which are shaped as sausage rolls in weaving, and that is fried in oil. “Also included is the existence of” Sunday bugnes ” in Lyon and surroundings.

The origin of bugnes is very old: it was already a specialty in ancient Rome which tasted them at carnival time. In Italian, they’re called chiacchiere.

Traditionally, in Saint-Etienne, offal shops offered the fritters just before Mardi Gras to remember the good memories of the  St-Etienne citizens who would begin Lent and therefore were neglecting their businesses.

Individuals were also used to make them, to not waste fats (cooking oil) whose use was prohibited by Lent. Nowadays, bakeries offer them as well, but still respecting the time of Mardi Gras.

In the Vieilleries Lyonnaises, from Nizier du Puitspelu in the nineteenth century, Lyon fritters were also associated with the season of Lent, Sunday firebrands were being called “Sunday bugnes” .

At that time, “Bugnes not contenoient of Milk, no butter, no eggs, and faisoient with flour, the yeast of beer or whole grain diluted in water and fried in oil, everything is good fry. ‘ – Louis, Sieur des Guénardes

He mentions them as one of the amenities of vogues: ” oily vapors that take you to the lungs announce bugnes cooking in the open air.

The thin ring of dough a little bigger than a ring thrown into the frying grows, swells, swells and becomes big again crispy golden bugne.’

There are two types of fritters. Some, called “Lyon”, are yellow, flat and crisp. They are cooked in hot oil and the paste is very fine.

Others, “Saint-Etienne Bugnes” are redder and softer. They are made from a thicker paste. Bakeries usually offer both types at the time of bugnes.

The recipe for fritters knows many variants (orange blossom for example, or lemon), so that a particular province or city can appropriate them as a specialty, or even claim the invention .

This is the case of the city of Lyon for example. It seems however that the recipe has arrived from Poland in the sixteenth century (or Karnawalowe Faworki Krouchtiki) and was derived from the recipe we know today.