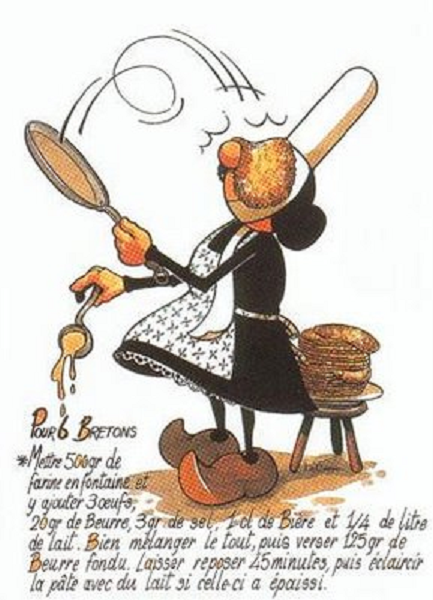 The crepe is not a recent invention … Following various studies, historians have shown that the origin of the crepe dates back to 7000 years before Christ! At this time, we do not yet say pancake. It was more like a slab thick. This cake was made with a kind of dough, obtained by crushing various grains and adding water. At the time, a flat stone served of hot pan.

Crepe or pancake, appeared in Britain around the 13th century due to the cultivation of buckwheat, brought back from crusades in Asia. First buckwheat cereal, it has at the beginning of this century been transformed to give the pancake that we know today, with the arrival of the white flour of wheat. It is served throughout creperies and goes well with a Bollée of cider or as a snack.

Pancakes, delicious sweet or savory that we ignore the origin, so it was about time that we have alook at the topic! Did you know that the history of pancakes shows it was already consumed since antiquity? The Romans actually used to eat pancakesduring the Lupercalia festival of fertility, that they held at the beginning of February to celebrate the return of spring and theimminent future harvests.

In the Middle Ages, pancakes, flour wheat, buckwheat or barley, milk and eggs were very common. Easy to do, not expensive,they were very popular with all classes and have become a symbol of French cuisine. The famous “crepe Suzette”, flavored with orange peel and Grand Marnier, was invented by a chef at the Café de Paris in Monte Carlo for the Prince of Wales, later to become King Edward VII.

Since then, Bretagne has emerged as the region where pancakes are eaten with a bowl of cider. The pancakes are eaten todayin all forms, filled, or with almond shavings, they are savoury too (with flour or buckwheat, they are called galettes in Brittany)and topped with ham, mushroom, onions or tomatoes for example.

The pancakes can be eaten as a main course or dessert at any time of the year and not only for Chandeleur, it would be a shame to miss out on!

The batter for 15 crepes:

Put all ingredients in a bowl except butter
Stir with a whisk until the batter is without lumps
Add 50g of melted butter: Melt in microwave, it goes faster!
For more flavor, add some orange blossom water or rum …
If possible, let stand for 1 hour
Spread a dose of batter into a hot pan, greased with a little bit of butter
Cook over low to medium heat … then … turn it over to cook the other side

Is cinnamon Toast Crunch Vegan? The Answer Might Surprise You

How To Thaw Uncrustables Quickly