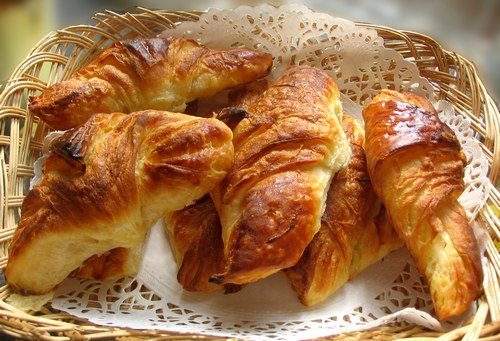 A croissant is a pastry made of flaky dough specifically, croissant dough, which includes yeast and a large proportion of butter.

The existence of Kipferl, ancestor of the crescent is attested in Austria since the thirteenth century, but without knowing the recipe (sweet or savory) or dough (puff or not).

In Paris, the first croissants are sold at No. 92, Rue de Richelieu, between 1837 and 1839, when the Austrians August Zang and Ernest Schwarzer open the Viennese Bakery.

Their versions of Kipferl (crescent shaped) and kaisersemmel (bread or kaiser bun Emperor) quickly inspired a host of imitators, and the crescent is already quoted in 1850 as a regular bread.

However, historians of gastronomy and French cuisine found that the current recipe of the croissant became a French culinary symbol in the twentieth century. In addition, given the documentation, and for the pastry in general, we can say that the diverse origins of the croissant (given below) are legends or myths.

A crescent-shaped pastry is probably traditional in Austria since at least year 1000. It would be a pastry made in convents at Easter, but not with puff dough, close to the kipferls. In France, they are mentioned in the inventory of French culinary heritage produced by the National Centre for Culinary Arts “forty cakes in croissant” served at a banquet hosted by the Queen of France in 1549 in Paris.

It may be that the intention was then to commemorate the alliance of a few decades ago of Francois 1er with the Grand Turk.

However, several hypotheses attribute the origin of croissant at a later date in 1683, in celebration of the victory of Polish and Austrian troops over the Ottoman troops during the second siege of Vienna.

According to the first, while the enemy had decided to attack at night so as not to be noticed, the Viennese bakers, up before dawn, have raised the alarm. It is to immortalize this victory thet they would have been allowed to make the Hörnchen (“little horn” in German) with its shape that recalls the Ottoman flag symbol.

The same legend is sometimes located in Budapest, then part of the Austro-Hungarian kingdom, but then there were Turks who besieged (1686).

According to another version, hundreds of soldiers and officers were present after the battle as a reward for their courage.Among them, Jerzy Franciszek Kulczycki a soldier, spy, diplomat, merchant and owner of the first Polish café in Vienna named Zur blauen Flasche, received 300 bags of black beans, unknown at the time in Europe, a treasure that the Turks hadabandoned as they fled.

Intrigued, Kulczycki was grinding coffee beans and proposed them to Vienna, without success. Then came the idea of serving the coffee and a pastry. He ordered from a bakery in town a pastry that, for its originality, would be able to promote coffee. Remembering the scar still open from the Turkish invasion, he decided to make crescent-shaped pastries.

A third theory is of Marie-Antoinette of Austria, from Vienna, who had officially introduced and popularized the croissant in France from 1770.

The term “croissant” is found for the first time in a dictionary in 1863. Littre mentions this: “Muffin or cupcake in the shape of a crescent” Pierre Larousse states in the Great Universal Dictionary of the nineteenth century, Volume fifth, 1869, “Bun whose shape is that of crescent: The croissants are made with flour of quality, crafted with water, containing beaten eggs. ”

The croissant was originally made with a dough similar to that of the bun, but the consumers’ taste for crispy croissants led over time to use a dough closest to the puff pastry. The term of this trend is the croissant, the shape right that looks more as a “crescent”.

As for bread, croissants are baked ideally in a hearth that fast-cooks the dough and gives a crisp which is the true mark of quality croissants. In a convection oven with baking timed, there is homogenization, which for the chef Yves Camdeborde “no longer reflects the amount of yeast and different flours” and “removes all key human personality and know-how of the craftsman. ‘

There are in total, says the pastry chef Christophe Felder, “fifty parameters and settings for a good croissant” whose “quality of flour and butter used, (…) the fermentation time of the dough, how to incorporate the butter, shaping the croissant, heat of the oven, the cooking time … ‘

Today, the low profitability of this product, lack of time and skilled labor, driving some bakers and hotels to replace butter with margarine, or make their croissants with frozen dough (usually based on margarine), that they just thaw and make up before going in the oven.

Place all ingredients in a bread machine, to make the “dough”.

Lay the dough on the work surface and flatten it by hand while giving a rectangle shape. Wrap the dough in plastic and refrigerate for 2 hours.

Remove the dough from refrigerator, spread on floured surface into a rectangle 7 mm thick.

Spread the butter in rectangle shape half the size of the rectangle of dough. Put the butter on the bottom of the dough.

Fold the dough over the butter, it must be completely covered.

Turn the dough a quarter turn so as to have the fold on the right side, the spreading roller in order to lengthen it, it must have a thickness of 6 to 7 mm.

Take the bottom and fold to two-thirds, folding the upper part so as to reach the first folded part.

Fold the rectangle obtained in 2 to itself, press for a smooth batter.

You get 4 layers of dough

Wrap in plastic wrap and put in refrigerator 1 hour.

After one hour, remove the dough and turn a quarter of a turn relative to the operation before the fold so as to have on the right side.

Folding a third of the dough and then the remaining third to have three layers.

Put the dough in plastic wrap and refrigerate for 1 hour.

After 1 hour, remove the dough and spread it by working in two directions in order to have a square of 3 to 4 mm thick.

Cut the square into 2 triangles, cut and paste.

Roll croissants starting from the base.

Put the croissants on a plate with flour. Glaze with an egg yolk mixed with a little water.

Let it raise for 2 hours.

Brush with egg yolk mixed with a little water (attention, not on the sides, it shall prevent the raising)

Buttercream vs Whipped Icing: Icing a Cake the Right Way

How To Thaw Uncrustables Quickly

How to Make Skin Color Frosting and Icing?