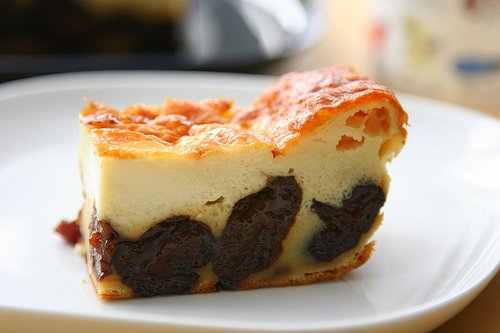 Far is a recipe for clafoutis in Bretagne, of which there are several variants. It’s called farz prov (far in the oven) in Breton. Themost famous is with prunes, although traditionally far do not have any. The recipe is very simple: eggs, butter, sugar, flour and milk

Far Breton origin: far in Latin means “wheat, corn, oats, spelled” … Did you know that originally the far was just a wheat porridge in which was added dried fruit just before cooking! ! That was such a cheap dish, it has become today a great culinary tradition of our beloved Bretagne!
Far is cited in the literature in the eighteenth century.

They then distinguish the far savory, made with buckwheat and consumed as an accompaniment for meat, and what is far now a sweet dessert. Consumption of savory far remains limited to Bretagne, while the sweet recipe will spread in the mid-nineteenth hexagon.

There will even be a major production from the 1930s. The far in Bretagne was originally made for religious festivals and family celebrations. When the consumption is widespread, Christmas recipes then appeared, enriched with butter, eggs and prunes.

Fillings vary from one region to another, plain, prunes, raisins, thick or thin. But what they have in common is their simplicity. Often likened to the Flan because of its appearance, however, it differs from the classic flan texture, being extremely dense.

The far can be eaten cold, it is sold by bakers and butchers-caterers.

Far is one of the stars of the Bretagne desserts. This is not surprising because it takes only a few ingredients and is made in a jiffy. It lends itself to interpretation and one should always have one in reserve. One can replace prunes by raisins or sultanas, with calvados or rum or no alcohol. The Far Breton has its origin in salted grits that were once the staple of many Bretons.

In a bowl, mix the sugar, flour and add the vanilla sugar.

Then add the eggs, taking care to gently mix everything every time.

Pour the milk and add the butter previously melted and stir until you get a smooth paste.

Add your prunes if you want to make a far with prunes and think to remove stones if they have (but you can obviouslymake it plain or with apples).

Butter the bottom of your pan and pour the batter.

You can place your pan in the oven and wait about an hour, medium heat.

Hint: roll the prunes in flour, and they will float higher in the cake.

Buttercream vs Whipped Icing: Icing a Cake the Right Way