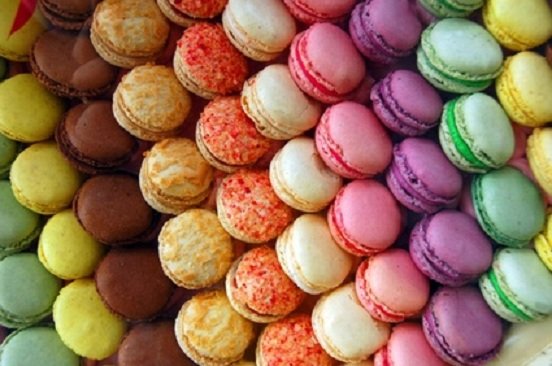 The macaron is a small cake, grainy and with a soft rounded shape, about 3-5 cm in diameter, several as a specialty in French cities and regions, and whose appearance varies according to recipes between Amiens, Boulay, Chartres, Cormery, Joyeuse, Le Dorat, Montmorillon, Nancy, Saint-Emilion, St. Croix or Sault. It should not be confused with a confectionery called massepain or with the Congolese, based on powdered coconut.

Derived from the meringue, it is made from almond powder, icing sugar, sugar and egg whites. The dough thus prepared is placed on a baking sheet and baked. This gives it its particular form of set dough and golden top.

The macARON appeared in Europe in the Middle Ages where it will diversify and find new shapes and flavors. From Italy, IT went to France during the Renaissance. It is indeed Catherine de MediciS who showed in the sixteenth century “maccherone” to the French. Curiously, however, it is not mentioned in the Treaty of jams and fardements published by Nostradamus in 1552.

It appears the same year, for the first time in French, from the pen of Rabelais, in the Fourth book under the definition of “small round pastry with almonds”, we can’t accurately determine what recipe he references.

There are writings presenting the macaroon recipe under the name Louzieh, a confection that the Ottoman caliph Umayyad was offered in the fifteenth-century by Syria.

In the Middle Ages, “macaron” meant two different products: the cake, but also a flour soup they ate with grated cheese, cinnamon and saffron and was called “macaroni”, only from the seventeenth century. This makes it difficult sometimes to know what products the historical sources refer to.

Before joining in pairs, this cupcake made with almonds, sugar and egg whites, crisp on the outside and soft on the inside was presented alone. It is quoted by Rabelais, its origin remains obscure. Yet many cities have claimed paternity and many legends were created.

Some claimed that the “navel of the monk (Larousse Gastronomique)” was founded in 791 in a convent near Cormery, other that Catherine de Medici brought it from Italy when she entered the French royal family. The first macaroon recipe found in a book is from the early seventeenth century.

At Joyeuse in Ardeche it appears in 1581, reportedly to the court of King Henri III where Catherine de Medici, mother of the king, it was used at the wedding of the Duke Anne de Joyeuse. The Macaron de Joyeuse is made with almonds and completely irresistible.

In the Basque Country, in Saint-Jean-de-Luz, the macaron appeared under the influence of a baker, Mr Adam, who offered it to Louis XIV in 1660 for his marriage. Since then, the descendants of pastry chef continued the tradition, as in Saint-Jean-Pied-de-Port or Louhossoa with Biscuiterie Basque.

In Paris, and in particular at the Court of Versailles, the chefs, Dalloyau ancestors, were those who founded in 1802 the palace of gastronomy of the same name, served macarons to Kings from 1682 to Louis XVI and Marie Antoinette.

In Lorraine, Nancy became the macaron city under the auspices of the Ladies of the Holy Sacrament (more known as macaroons sisters,who now are a street name) in a recipe kept secret since the eighteenth century.

The recipe for macaroons of Boulay appeared in 1854. These macarons perpetuate the original recipe and have the particularity of having a hard crust and melting inside.

Enriched with jams, spices, liqueurs, macaron shells are joined together in pairs in the 1830s. Then at the end of the nineteenth century was born the “Paris macaron” or “Gerbet”.

A heart of buttercream or jam/compote is added between the two shells. It is found in 1880 in the district of Belleville in Paris. It is popular in the Latin Quarter in the tearoom Pons, now defunct, as well as Ladurée who dyed pastel colors theirs, indicating their scent.

The current presentation, sweet and fragrant, has little to do with Lorraine macaroons flavored with almond, the crisp crust and melting inside.

There are many recipes for macarons, as you have understood. below is one of them, quite simple to achieve, but for the perfectionists you have to experiment with the quality of almond powder, the texture, oven heat and other parameters. Macarons are not easy to make!
(For 30 macaroons)

Preparation to succeed the best recipe for Easy Strawberry Macaron

Add the red food coloring in the whites and mix gently with a spatula
On the stove, spread parchment paper

Preparing the ganache for macaroons

Heat 225 grams of strawberries, chopped, into a small saucepan

Add 150 grams of white chocolate and melt over low heat

When the mixture is homogeneous, remove the pan from the fire and

cool down your strawberry ganache

Fill a piping bag with your ganache

Your macarons are made. Put them in the fridge!

Is cinnamon Toast Crunch Vegan? The Answer Might Surprise You

Buttercream vs Whipped Icing – What Is The Difference?