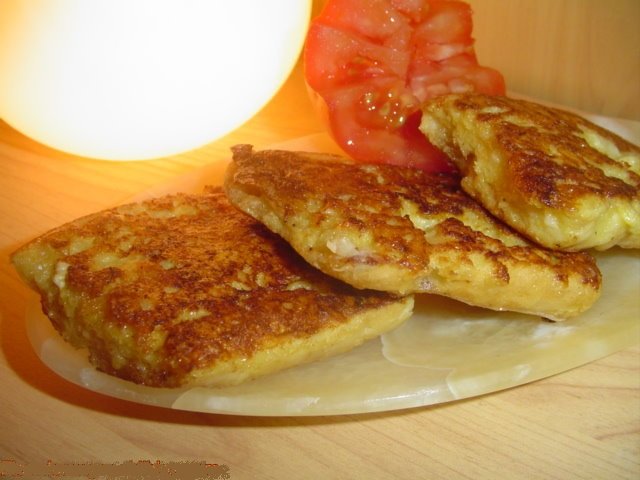 The popular history behind French toast is that it was created by medieval European cooks who needed to use every bit of food they could find to feed their families. They knew old, stale bread (French term *pain perdu* literally means *lost bread*) could be revived when moistened and heated.

Cooks would have added eggs for additional moisture and protein. Medieval recipes for “french toast” also suggest this meal was enjoyed by the wealthy. Cook books at this time were written by and for the wealthy.

These recipes used white bread (the very finest, most expensive bread available at the time) with the crusts cut off, something a poor, hungry person would be unlikely to do.

One of the original French names for this dish is pain a la Romaine’, or Roman bread. Apicius wrote: “Another sweet dish: Break [slice] fine white bread, crust removed, into rather large pieces which soak in milk [and beaten eggs] Fry in oil, cover with honey and serve.” —Apicius Cookery and Dining in Imperial Rome, edited and translated by Joseph Dommers Vehling , recipe 296 (p. 172)

“This dish does have its origins in France, where it is known as “ameritte” or *pain perdu* (“lost bread”), a term that has persisted, in Creole and Cajun cookery; its first appearance in print as “French Toast” was in 1871. ”

“In the south of France, it was traditionally eaten on feast days.”

“French toast is a dish we have borrowed from the French, who call it pain perdu’, or lost bread…It is known in England as the poor knights of Windsor, which is the same phrase used in many countries.

One theory about how the latter name came about goes as follows: In olden times, one of the symbols of distinction between the gentry and the common herd was that the former were expected to serve dessert at dinner.

Knights, of course, were gentry. But not all of them were rich. Those who were not, in order to maintain their status, made do with armer ritter’, often served with jam.”

Take slices of white bread, trimmed so that they have no crusts; make these slices square and slightly grilled so that they are colored all over by the fire. Then take eggs beaten together with plenty of granulated sugar and a little rose water; and put the slices of bread in this to soak; carefully remove them, and fry them a little in a frying pan with a little butter and lard, turning them very frequently so that they do not burn.

To one egg thoroughly beaten, put one cup of sweet milk, and a little salt. Slice light bread and dip into the mixture, allowing each slice to absorb some of the milk; then brown on a hot, buttered griddle or thick-bottom frying pan; spread with butter, and serve hot.”

Beat eggs with milk and sugar. Possibly add a tablespoon of rum.

Dip each slice in the mixture, both sides. Melt the butter in the pan (it should not be too brown), brown the bread, cook for about 1-2 minutes on each side.

Put on a plate and sweeten the 2 sides (vanilla sugar, flavored with cinnamon sugar ….)