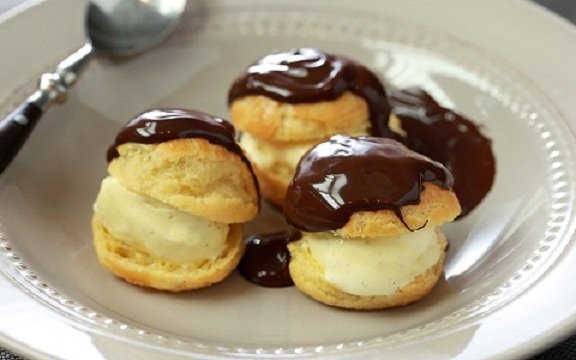 Originally, the term “profiterolle” used by Rabelais, designated a “small profit” made by the servants. From the 16th century, it joined the French culinary vocabulary to describe dough baked in ashes. In 1690, the profiterole is a small crumb-free bread, filled and/or used in soups. It was not until the year 1881 that it became the profiteroles dessert we know today.

Served for parties and restaurant, they are often associated with special occasions. Mixture of hot and cold, crunchy and fondant, profiteroles belong to the family of desserts frosted and sophisticated, as well as the buche (log) or frozen nougat. To vary the pleasures, know that there are many variations of the original recipe. Starting with these crepes/profiteroles with chocolate, in which choux are replaced by rolled crepes. A treat!

Choux pastry owes its specificity to the fact that when one rehydrates (adding the eggs one by one) a previously dried dough (flour fired in the oven), of a neutral taste and good raising in the oven, it is an ideal support for stuffing with custard or buttercream.

It owes its invention to Popelini, cook of Queen Catherine de Medici in the mid-sixteenth century. It is told in a post on the Renaissance that the art of pastry owes to the entourage of the black widow. Although many historians today tend to minimize this Italian influence, common sense indicates that this was indeed the case, however.

In any case, Popelini devised this dough which he was already for choux, not very regular, then called the poupelins. They were stood with a spoon on a baking sheet and once cooked, stuffed with fruit jelly.

Fried in oil, these small poupelins gave birth to pets-de-nonne.

The method of preparing the dough was for long given the name of pate-a-chaud, which became choux pastry (it does nothing to the form of a small cabbage as is often believed) much later. In the eighteenth century, Avice slightly modified the recipe but the real modern choux pastry was invented by – once again – the great Careme  (who had served for his apprenticeship under Avice).

It was he who had the idea to cram custard or cream and to make Croquembouches. Initially, the croque-in-mouth fruits were dipped in a hot caramel. Careme is also the creator of profiteroles.

Usually filled with vanilla ice cream and topped with warm chocolate sauce, profiteroles can also be topped with custard. In this case, they are similar to other recipes for choux pastry: religieuses, chocolate eclairs and other pastries sold in gourmet pastry shops.

Ultimate step for preparation of profiteroles: the warm chocolate sauce. The recipe contains chocolate, powdered sugar, butter, a little cream and a dash of milk. On one side is boiled milk, cream and sugar in a saucepan.

On the other, we break the chocolate into pieces before mixing with the rest. Just then smooth it all with a whisk before adding the butter. The sauce is ready to be poured. For a final note, you can sprinkle the tops of profiteroles with some almonds … Enjoy!

For the chocolate sauce

When the mixture boils, remove from heat, add the flour all at once, mix well to obtain a homogeneous paste and put onheat 1 or 2 minutes to dry the dough well

Off the heat add the eggs one by one and mix well: you get a smooth and homogeneous dough
Fill a pastry bag with the dough and on a baking sheet lined with parchment paper, form small choux 2 to 3 cm in diameter.

Bake for 30 minutes without opening the oven door during cooking

To make the custard:

Heat the milk to a simmer
Beat the egg yolks with the sugar and vanilla until the mixture is foamy, add the cornflour
Pour the boiling milk on the mixture, whisking well
Return to saucepan and thicken a few minutes over low heat, stirring constantly
Let cool, then place in a cool place

To make the chocolate sauce