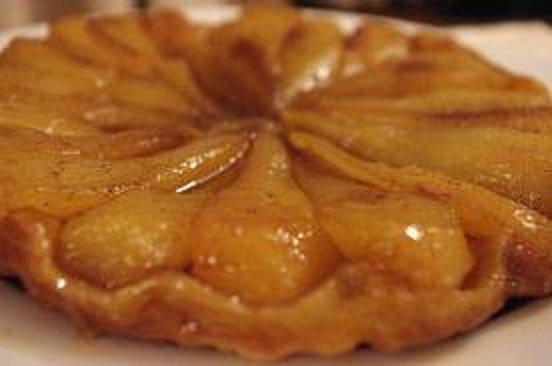 The recipe for tarte Tatin is now a classic of French cuisine, often proposed and served in the best restaurants.

The history of the Tatin is pretty nice, it has its origins in the late nineteenth century, in a restaurant in the center of France, in Sologne (Lamotte-Beuvron in the Loir et Cher).

These are two sisters, Caroline and Stephanie Tatin who invented, by chance, the famous pie. The pie was not reversed as they say but it burned!

Therefore one of the sisters decided to keep the apples, caramelized now, put the dough on top so that the apples do not burn over and return to oven. It was a great success!

This was done and the pie now bears their name, the Tarte Tatin!

The legend says that the Tarte Tatin was born in Sologne in Lamotte-Beuvron, in the late nineteenth century. The Tatin sisters were working there while the hotel and restaurant were busy, located opposite the train station.

Caroline, the eldest, welcomed the customers, while Stephanie was busy in the kitchen to satisfy travelers, hunters and other lovers of traditional cuisine from Sologne. Her specialty was the apple pie she served caramelized and tender.

The famous Tarte Tatin was born as a blunder? The sisters did say they dropped the pie before deciding to put in back in the oven upside down for the “miracle”? The reality is probably less picturesque: the pie “upside-down”, with apple or pear, was in fact an ancient specialty of Sologne that was found in all of Orleans, and was simply made famous by the Tatin sisters.

It was released in Paris and was noticed by the famous gourmet food critic Maurice-Edmond Sailland said Curnonsky, under the name of “tarte of Demoiselle Tatins.” Ambassador of  famous kitchens, author or coauthor of numerous books on regional cuisine and the best French restaurants, he gave in 1926, in his volume on Orleans, the famous recipe for tarte Tatin.

It is also said that this man full of humor, elected “prince of gastronomes” by the magazine Le Bon Gite Et la Bonne Table in 1927, invented the story of the Tatin sisters, only to amuse his interlocutors: during a press conference, a baker realized that with the famous pie Curnonsky embroidered his story and journalists were conquered. It was enough to make this pie Culinary-star!

In Paris, it is at Maxim’s restaurant that it was served for the first time. Today, it remains a classic of French tables. It is often served with whipped cream or vanilla ice cream, to the sorrow  of the Confrerie des Lichonneux de Tarte Tatin de Lamotte-Beuvron.

This association, founded in 1979 is indeed on a mission, not without humor, “enforcing the traditional recipe of the famous dessert des Demoiselles Tatin”, “combating the defects and other culinary abuse” and “criticizing heretics” . However, for its members, the tarte Tatin is served plain, without any accompaniment.

Tarte Tatin is traditionally made with apples, but other fruits, such as pears, prunes, peaches, apricots, berries can be used instead of or in conjunction.

Ingredients for the dough:

Mix for the preparation of the dough the butter to the flour, sugar, and salt, rubbed into the hands into a fine powder, add the egg in the shortest possible time, then knead, if necessary add a teaspoon of wateк.

In a cake mold of 24 cm diameter and 5 cm high, nonstick if possible, put to melt butter and sugar.

Add the apples peeled and cut in slices, in rows next to each other on the side and then cover with a new row at a downward angle.

Meanwhile, roll out the dough with a rolling pin.

Remove the mold from the oven and place on the cooktop set at half power, simmer for about 25 minutes and then give a turning movement to the mold, the noise (PSSCHUITT) indicates the end of the cooking process.

Stop the heat, then put the dough over the apples, make some holes with a fork and put in the oven for 25 min.

To unmold, let it cool slightly.

Put again on the fire, and give a twisting motion with your hand, then when it is off the mold, place the serving dish over the pan and turn the whole dish.

Attention, protect your hands with gloves and be careful as hot caramel might leak.)

Serve as is, without adding anything.