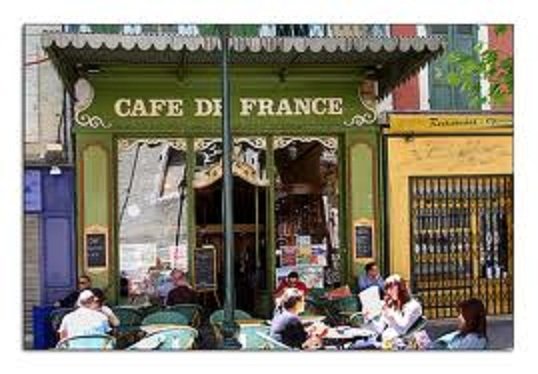 We can locate the discovery of coffee in Ethiopia between 2000 years BC and 850 AD. At the time, they ate coffee by turning it into a sort of thick porridge made of animal fat also. Ethiopians have also subsequently discovered the roasting. They would be at the origin of coffee as we know it today.

Since the coffee grew wild in Ethiopia, it was not until the passage of coffee in Yemen, to the 14th or 15th century, to see a true culture of coffee. With caravans, the Muslim world is soon conquered.

At the conquest of Europe and France European travelers discover with delight that black brew known as Chaube or chaova and “give courage and strength of mind.” The first bag of green coffee arrived in Europe in Venice in 1615. In France, it was not until 1644 that a traveler arriving from Constantinople, landed at the port of Marseille and reports some coffee beans which he is enjoying with his friends.

But it was not until 1669 that the coffee begins to be truly appreciated in France. That year, Turkey’s ambassador offers coffee in the court of King Louis XIV at the time of a great reception. In 1672, opens the first cafe in Paris and then in 1686 it was the turn of the famous café “Procope” to be inaugurated.

This classy and elegant, still open today and the oldest cafe in France at the time attracted the great of this world and very successfully, especially with this new fashionable drink. But at the time, the coffee is still a luxury.

Not to mention the French West Indies! In 1786, the French Gabriel De Clieux introduces two to three plants of coffee in Martinique. These first plants will be at the origin of all coffee in the Caribbean and Latin America, including the famous “Blue Mountain” in Jamaica. Today, Guadeloupe, Martinique and New Caledonia have small plantations, which make France a real producer!

More pleasure than necessity, Coffee is not a necessary product for our existence. For millennia, Eurasian people have ignored it. Unknown from ancient Mediterranean populations, it has not prevented their civilizations to flourish.

It is only for three centuries that this product is popular at home and for less than a century, its use is widespread among the majority of the French.

Although not meeting our basic needs, drinking an occasional cup of coffee has become so general that we can hardly do without! Coffee wakes you gently in the morning, coffee made with office colleagues or friends meeting, which ends harmoniously a nice dinner … there are plenty of opportunities to taste through moments of pleasure and conviviality! A medicinal drink, the fruit of the coffee tree was first boiled and consumed for its medicinal benefits, appreciated by farmers in Ethiopia where it  grew in the wild.

The first written records describing the virtues of coffee on the digestive system in particular, have been found in medical reports of the ninth to the eleventh century. Today, we know that coffee gives us carbohydrates, fats, and antioxidants. The café also reduce the risk of Alzheimer’s disease among regular consumers.

A popular drink, especially in France

In twenty centuries, coffee has become a universal drink, as illustrated by these figures: Today, it is consumed about 1.5 billion cups each year worldwide. The estimated world harvest in 2008/2009 was about 140 million bags. Coffee is the second most traded commodity in the world after oil and agricultural raw products in volume.

France imports (customs clearance basis) for the year 2007 represented about 4.1 million bags, 2.9 million bags of Arabica and 1.2 million bags of Robusta. 70% Arabica 30% Robusta. Consumption in France is of the order of 305 000 tonnes or about 4.95 kg per person. This places France in the forefront of consumer countries.

Legends of origin The origin of coffee is lost in history, in the mystery of many fascinating legends. Traces are found in the First Book of Kings in the Bible, identifying “roasted coffee beans” offered by David to Abigail as a sign of reconciliation.

We may also recognize as coffee, the drink offered by Helen of Troy and Menelaus; Homer defines it “useful against sorrow, resentment and painful memory”.

We assume that the “black potion” offered by the Archangel Gabriel to Muhammad touched by sleeping sickness, could be coffee; one day, Muhammad awoke sick. Allah sent the angel Gabriel, carrying a gourd full of a black brew. Muhammad drank and felt immediately better. He finished the bottle and quickly regained all his energy. At that point in time that followed, he unseated forty horsemen and honored forty women, according to legend.

One of the most famous legend about the origin of coffee comes to us from Cheodet monastery in Yemen, according to which the religious used this “beverage obtained from certain berries” to extend the vigils of prayer and meditation.

The best known is that of the shepherd Kaldi: to the 8th century AD, a young shepherd guarding his goats in the highlands of Yemen. One day, he was intrigued by the strange behavior of his flock. His animals, who had eaten the red berries of a shrub jumping and frolicking in strange ways. They were excited to the point where they danced until dawn.

Kaldi went to the nearby convent of Chahodet and told the senior of this miracle. It was his idea of boiling nuclei of these fruits for making a beverage. The drink gave a special passion for those who drink it. They named it “Kawah,” that is to say, force, momentum, vitality. From that day, the monks, who took the habit of drinking it, were no longer prey for drowsiness during long nightf of prayers at the monastery.

The first roasting – Discovery of the roasting is done by chance. In Yemen, two monks, Sciadli and Aydrus are responsible for the coffee harvest. A rainy afternoon, they return with their harvest completely soaked. To dry the grain, they put in a fireplace where a good fire is burning. Then they go to prayer. When they return, the grains are more than dry. They roasted, but they smelled very good. Our two monks, in fact, discovered the principle of roasting.

The first description It dates back in 1592 by the physician Prosper Alpino, which in Egypt had the opportunity to know the “black drink with a bitter taste similar to chicory.”

Mocha In the 16th century, coffee was introduced on the heights of the hinterland from the port of the Red Sea: Moka which becomes the first port in the world for coffee trade. It is the hub of the global coffee trade from 1650 to 1750.

The sultans did check all bags, bound not to lose the monopoly on coffee grains; all had to be boiled before leaving for Saudi so they can not germinate and thus be grown in a region other than Ethiopia and Yemen. They kept it until the 17th.

Europeans are familiar with this drink during their travels in the East.

The first shop called “coffee” opened its doors in 1555 in Istanbul. 50 years later there will be more than 500 in the city.

1615 Venice was the first city in Europe to accommodate a load of green coffee from Cairo.

1645: The first shop named “café” opened for its consumption, primarily the privilege of the intellectual elite and then progressively be introduced in the classes and in the lounges.

1689 The Turkish army abandoned its reserves coffee in Vienna. They are retrieved by a man named Kolchinsky, inventor of Viennese coffee and pastries which accompany it.

France 1664: A ship from Alexandria landed her cargo of coffee in Marseille. At the same time, cafés open in London, Amsterdam and Marseille. Marseille enjoys the exclusivity of all shipments from leading providers of Moka.

1669: Arrival of what is rated “official” coffee in France, it made an appearance at the court of Louis XIV through the Turkish ambassador, Soliman Aga who offers coffee at a reception, even if they do not appreciate it and prefer the chocolate.

Penetration of coffee was quite slow: the importation of exotic product costs to governments, it was heavily taxed to restrict consumption. People will use all possible means to distribute, such as smuggling. It will be for long considered a luxury item.

1670: Attempt, which was a failure to establish a plantation in Dijon.

1714: first coffee plant in the Jardin des Plantes, the collector of all plants of the French colonies.

1720: Paris has hundreds of cafes, the coffee is imported into Guyana by Gabriel Clieu, naval officer.

Conquering the world In 1616, the Amsterdam Botanical Garden offers a coffee plant, subject to important observations.

In 1690, the Dutch succeed, at the cost of a many difficulties, by theft they get more coffee plants they carry in Batavia and Java in their Asian colonies. Great traders, they launched the operation of coffee in South America and Africa. All colonizing countries follow their example, based on slavery.

Cafe: is plain coffee with nothing added, bu tis strong as it is brewed like expresso

Cafe au lait: In France, this is simply coffee with steamed milk, and it’s almost always wonderful. You will sometimes get the coffee served in one pot or in the cup, and then a pitcher of steamed milk to pour in as you please.

Cafe creme: is, as it sounds, coffee served in a large cup with hot cream.

Decaf: or decafeinated,  is decaffeinated coffee. You will still need to tell them you want milk (lait) or cream (crème) with your coffee.

Cafe noisette: is espresso with a dash of cream in it. It is called “noisette,” French for hazelnut, because of the rich, dark color of the coffee.

Cafe Americain: is espresso with a dash of cream in it. It is called “noisette,” French for hazelnut, because of the rich, dark color of the coffee.

Cafe leger: is espresso with double the water.