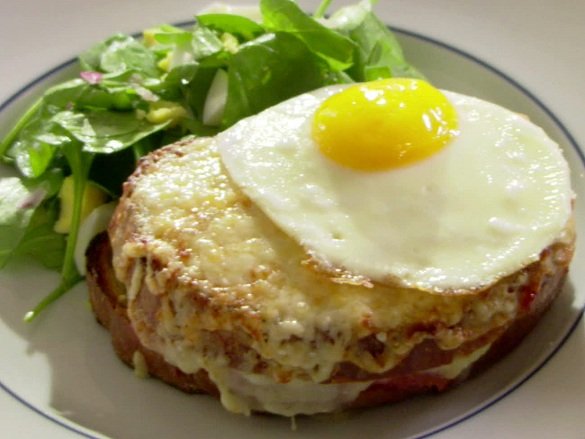 The Croque Monsieur, or “Crispy Mister,” appeared on Parisian café menus in 1910. The original Croque Monsieur was simply a hot ham and Gruyere cheese sandwich, fried in butter.

Some believe it was accidentally created when French workers left their lunch pails by a hot radiator and came back later to discover the cheese in their sandwiches had melted.

That’s an entirely plausible story, but an unacknowledged cook somewhere had the culinary ingenuity to take that bland hot sandwich and sauté it in butter until it turned crisp and golden brown. That move is what truly deserved the fame and honor for this scrumptiously addictive sandwich.

A croque-monsieur is a grilled ham and cheese sandwich. It originated in French cafés and bars as a quick snack. Typically, Emmental or Gruyère cheese is used.

The name is based on the verb croquer (“to crunch”) and the word monsieur (“mister”). The sandwich’s first recorded appearance on a Parisian café menu was in 1910. Its earliest mention in literature appears to be in volume two of Proust’s In Search of Lost Time in 1918.

A croque-monsieur served with a fried egg or poached egg on top is known as a croque-madame (or in parts of Normandy acroque-à-cheval).

The noted French chef Jacques Pepin also makes a version using chicken instead of ham, which he demonstrated in the “Our Favorite Sandwiches” episode on the PBS series (and its coordinating cookbook of the same title)Julia and Jacques Cooking at Home in which he worked with Julia Child. Many dictionaries attribute the name to the egg resembling an old fashioned woman’s hat.

According to the Petit Robert dictionary, the name dates to around 1960. The namecroque-mademoiselle is associated with many different sandwiches, from diet recipes to desserts.

A ham and cheese sandwich snack, very similar to the croque-monsieur, is called a tosti in the Netherlands, and toast (pronounced “tost”) in Italy. A version of this sandwich in Spain replaces the ham with sobrassada, a soft sausage from the Balearic Islands that can be easily spread. In Catalonia it is known as a bikini.

Found all over France today, the Croque Monsieur – casually referred to as a Croque – has as many recipes and variations as it has cooks. The crunchy sandwich is served as an appetizer, snack, or casual meal. Try one of these recipes for an incredible experience – you only though you knew grilled cheese sandwiches!

The Croque Madame is an easy to make, crunchy cheese sandwich with an egg and Béchamel sauce on top. It’s a very easy recipe; if you’ve ever fried an egg for breakfast, you can make this Croque.

If you top this sandwich with a fried egg it becomes a Croque Madame.