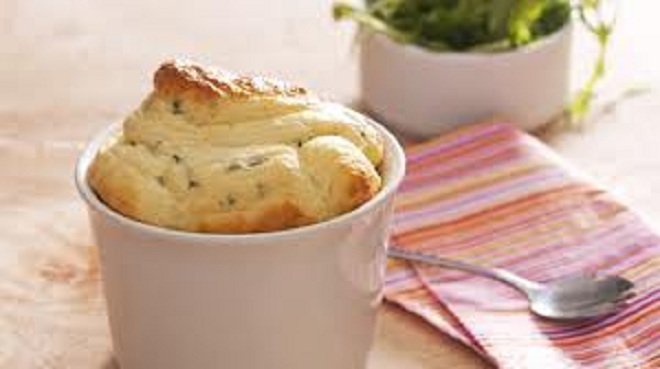 Souffles are preparation, sweet or savoury, in which the main ingredients is beaten egg whites.

If we talk about savoury souffles, they can be prepared with stuffing fine or coarse, raw or cooked meats, vegetables, mushroom, or cheeses.

They can be simple, stuffed or topped. They are usually served in their baking device or mold, pot, container. It can be prepared as a large dish to share, or in individual containers.

The souffle au fromage (cheese souffle) is the most common, however it is quite a difficult recipe to achieve, as it will either don’t raise enough, or be overcooked, or undercooked, or the “souffle” effect will fall down the second it’s out of the oven.

The difficulty wil be to have a uniform texture inside, soft and moist, and a slightly crusty top.

In a saucepan, heat the cream, butter and thickener, stir until it forms a homogenous mix. Add nutmeg, salt and pepper. Off the heat, add egg yokes, cheese and parmesan, stir to incorporate.

Beat 4 egg whites to obtain a solid meringue. Slowly incorporate them to the previous mix, trying to keep the result as “airy” as possible.

Pour the mix into buttered containers. Immediately put into medium heat oven (175C) for 25 to 30 min.

Hint: to incorporate the whites, use a large spatula and turn it over in big chunks, as a smaller instrument would break the bubbles in the whites.

int: Never ever open the oven door during cooking, as the souffle would collapse at once.