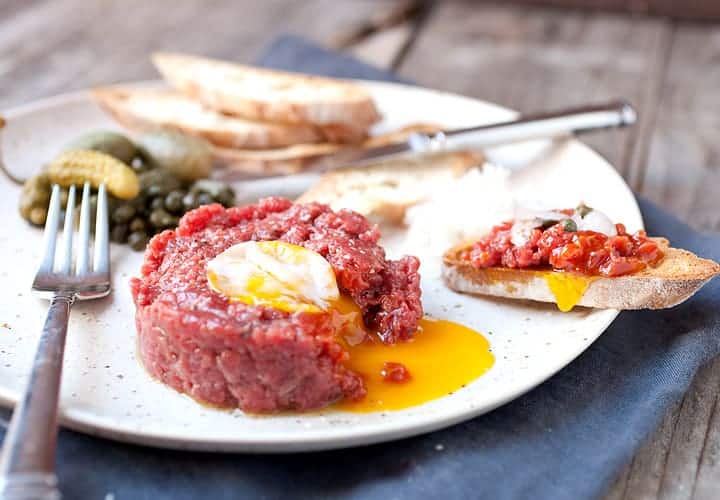 Attila, “the scourge of God,” was the leader of the Huns in 434. After more than half a century of contact with the Romans, his people had probably become a little less beastly, but he always lived and slept outside, disdaining all agriculture and even all cooked food, eating raw meat they softened by placing it between the thighs of the rider and his horse’s flanks.

Cut the meat with a sharp knife (very finely diced) or chop it in the meat grinder or food processor.

Add the meat to the sauce and parsley. Adjust the seasoning.

Dress the mix in a dome shape in the center of the plate and serve … with French fries!

Some chefs like to serve the egg yolk on top, to mix yourself. It adds a little fun to the Tartare recipe.

The name associated with Tartar is believed to have come from the Latin word Tartarus meaning hell, the Romans considered the Ta-ta people of central Asia (a nomadic group of Genghis Khan’s army) to be savage and barbaric and because of their bloodthirsty reputation, they inserted an “r” in their name, thereby linking them with Tartarus (or hell).

It became a popular dish in the west after it evolved into what we know it as today, which is the combination of uncooked meat (beef or horse) with raw egg, capers, sweet pickles, and other seasonings.

The adaptation of the extra garnishes most likely originated in Germany, Steak Tartar was most probably introduced to them by the Russians who learned the dish from their Tatar conquerors and then exported it to Europe via German contacts. American scholars suggest it reached its shores through German migrants sometime in the late 19th century.

All though there is no historical evidence that the Mongolians ate uncooked meat, as there is no reference to this in Chinese historical records, and medieval observers in the Middle East never wrote anything about it either, the myth still lives on.

Steak Tartare is a dish whose main ingredient is raw beef or raw horse meat, usually, cut into small cubes with a sharp knife (coarsely chopped), although often finely chopped in a food processor.

It is important to distinguish the ancient dish, originally from the Russian steppe nomads, from the modern recipe, which uses only the principle of raw meat. It is noted that Korean cuisine presents steak tartare, usually spiced in one dish (Yukhoe) or sometimes mixed in bibimbap (Korean culture has also partially Mongolian origin). In the recipe, Italian (Genoese) were added egg yolk and capers, pickles, a little olive oil, parsley, garlic, and onions.

Traditionally, the seasoning is done with salt and pepper, Tabasco, and Worcestershire sauce. The Classic steak tartare is usually served with a side of fries.