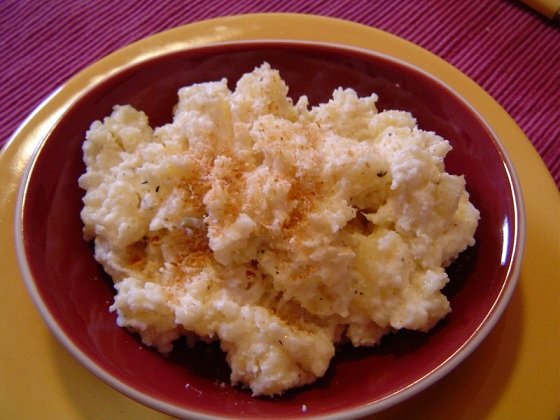 The brandade is a fish-based dish, a specialty of Nimes which is widespread throughout eastern Occitania, Languedoc to Liguria through Provence, in addition to the Roussillon and Catalan region in Spain.

It is based on cod and olive oil. There can be lemon juice, garlic, parsley or other herbs or spices (thyme, bay leaves, onion, etc..).

The story goes that when a Nimoise woman with very creative idea imagined to crush the flesh of cod in a stone mortar, dilute and mix with fine fragant olive oils. So was called this new dish “brandade”, from the word “brandado,” past participle of “Brandar” which means “move” in Provencal.

The cod brandade was thus born and was unanimously loved, thanks to the chef Durand that made it popular! Thus, the authentic brandade is devoid of potatoes and can only come from the ancient Roman city of Nimes!

In some recipes, are added potatoes. In Paris, it is served as a kind of pie (mashed with milk or cream mixed with cod) and browned in the oven.

In Menorca, sometimes artichoke is added to the traditional recipe.

Until the invention of refrigerators, the only way to keep cod was salted then dried. Fishermen in the Atlantic and the North Sea, where codfish (name of the fish when fresh, when it was called cod when salted then desalted) is found in abundance, traditionally were drying cod.

There are two sources for this recipe: the Basque Country on the one hand, in the early years of the sixteenth century Basque cod fishermen sailed to Newfoundland to bring large contingents of cod, the Basques then developed various recipes for cod with piquillo peppers stuffed with cod and cod brandade parmentière.

Another variant is in Charente, using garlic and parsley. At Nimes in the other hand, there is a cooked recipe of Nimes brandade, different from the brandade parmentière because this recipe does not contain pieces of cod and codfish, but is cooked from mashed cod and olive oil to which is added potato, put to gratin in the oven.

A chef of the bishop, Mr. Durand, a native of Ales in 1766, used the idea of the recipe for brandade of Mr. Augier, restaurant in Nimes, combining the salt cod with ingredients regularly used in Mediterranean cuisine.

Wash with water to get rid of excess of salt.

Cut into chunks or sections according to the recipe.

In a large volume of clear, cool water contained in a bowl or pan, let desalinate the cod for 1 night (12-15 h).
Regularly renew the water. Change the water at least 2 times at the beginning and end of soaking.

The next day, when the cod is perfectly moisturized:
Rinse thoroughly with cold water.

Place the drained cod in a saucepan with ½ liter of milk. Complete with cold water so as to cover the fish.
Put on low heat uncovered, stop cooking just before boiling.

Cod should never boil, it makes the elastic and rubbery fish.

Drain the fish and let cool.
Once the cod is cold, remove the bones and skin.

In two separate pans, heat the oil and milk.

Shred the cod meat in the mixer bowl. Puree (not too thin).
Add little by little the milk and oil. The gradual incorporation takes about 15 min.

Brandade should be neither too liquid nor too thick but fine consistency.

Add 1 pinch of nutmeg, 1 dash lemon juice, 1 dash of pepper (possibly truffle slices, if one has …)

Serve lukewarm accompanied by croutons, it can be eaten cold too, or warm when gratinee in the oven (brandade Parmentier).