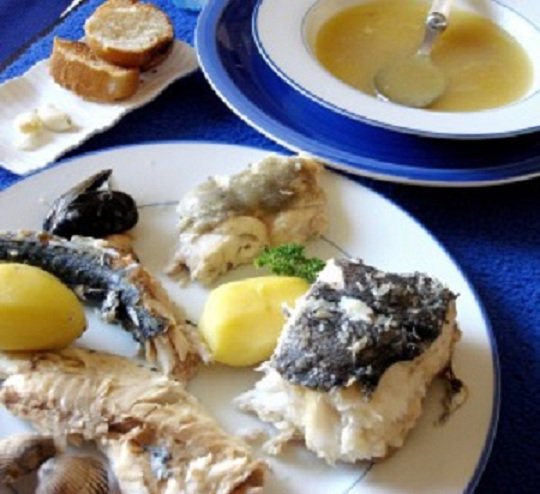 Many stories have been written about these recipes that regional coastal people interpreted in various ways depending on the villages and seasons.

In the seventh century BC, the Greeks already ate a simple fish stew called Kakavia.

Later, we find the fish soup in Roman mythology, such as the soup that Venus serves to Vulcan …

From the origins, pots and other cotriade, bourride or bouillabaisse, small meals were prepared and eaten with the humblest of their products from harsh sea trips Returning from fishing, they heated on the waterfront a cauldron filled with sea water.

When the water boiled, fish outsized or unmarketable, headless, mutilated were plunged in… and then they added some herbs, or other spices.

The Cotriade is a derivative of the Breton name “kaoteriad” denotes the share of the catch returned by the sailor, and the contents of the “kaoter” (cauldron).

The Cotriade is the coastal Bretagne dish that was prepared by the family on the dock or at the back of the boat, or even on deck by crews at sea ..

Fragrant curls of iodine and Roscoff onions browned mingling with the aerial ballet of hungry seagulls … Cotriade is the simplicity Curnonsky placed at the top of Breton cuisine.

It is a specialty of southern Finistère, on the edge of Morbihan (small port of Brigneau) and to the Bretons what the bouillabaisse is to Southerners: traditional and popular dish prepared with local fish species.

It is used the same way as bouillabaisse, that is to say, by drinking the broth first and then tasting the different fish then. This dish is served with potatoes boiled in water, topped with a drizzle of oil and vinegar.

The addition of seafood, vegetables and herbs is a further contribution to “civilize” the dish and offer it in restaurants.

The more fish on the list, the more cotriade is considered refined. The order of introduction of different species during cooking is key to the success of this dish (conger first, last sardine) so that all fish have the same level of cooking.

Clean the fish. Place the heads, bones and a piece of eel in a pot.

Peel & chop the onions, add them, as well as celery stalks, trimmed and chopped, bouquet garni.

Cook at small bubbling for 20 min.

Peel the potatoes and cut into slices.

Slice the leeks cleaned and washed.

Melt the butter in a saucepan, add the leeks and garlic, sauté the mixture gently, then add the potatoes.

Stir over the fire for a few minutes.

Sieve the cooking broth from the conger with spices and pour over the potatoes.

Cook for 10 minutes, adding the conger in the broth. Add the bream and hake pieces.

Bake for 10 min. Finally add the sardines and gurnard.

Continue cooking for 10 minutes more. Cooking fish should be conducted in small tremors.

Drain the fish and potatoes.

Serve the broth in separate individual bowls, then the fish and potatoes with dressing.

Should You Eat Shrimp Tails or Not?