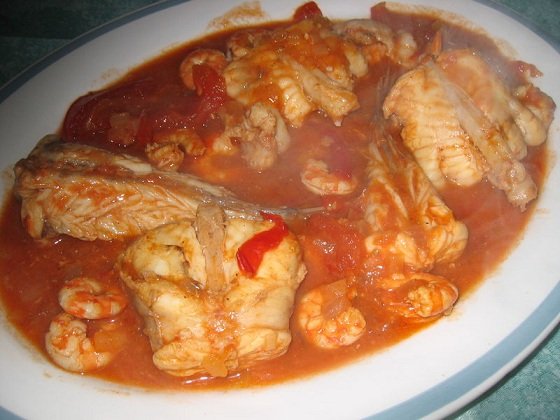 For information, Armoricaine sauce and American, are one. It is a distortion of language, and if you push a little further your research, you will find it is the Provencal tomato sauce that is used for a lot of preparations. Finally, to paraphrase a famous poet, whatever the name, as long as we enjoy.

You could accommodate lobster or crayfish in the same way or simply monkfish, yes our famous angler who do a great dish  a l’armoricaine. The side best suited to this kind of preparation is a simple rice pilaf.

The sauce à l’Armoricaine is a traditional French recipe from coastal Brittany where it is most commonly prepared with shellfish, or used to flavour firm white-fleshed fish such as La Lotte or Monkfish- otherwise known as poor man’s lobster. It’s creation dates back to 1860 when it was first made by

French chef Pierre Fraisse- a Breton who had been working in Chicago and recently returned to Paris where he opened his own restaurant serving traditional Britannic cuisine.

Legend has it that late one evening some customers arrived at his restaurant hoping to be served dinner just before closing time, and so they had less than an hour to eat. Using the products at hand- a

few lobsters and the chef’s staples such as aromatic herbs and fresh tomatoes, he was too pressed for time to slowly cook the lobster in a bouillon (seafood stock) as he would normally do, so instead he flambéed the lobster flesh in cognac and cooked it in a sauce of diced tomato, white wine, garlic and fresh herbs.

The dish was a big success with his late night diners and when they asked what the dish was called, he named it on the spur of the moment- “Sauce Américaine”- in homage of his recent stint in America where he learnt to prepare delicious dishes but make them much faster to suit the pace of his American clientele!

Due to the given name of this dish, to this day a battle of recipe ownership exists between the Americans and the French, who commonly refer to the sauce respectively as either Americaine or Armoricaine- ‘Armorique’ being an ancient name for the northern region of Brittany where the coast is called les Côtes d’Armor.

‘Americaine’ as labelled by chef Pierre, suggests ownership to the Americans, and ‘Armoricaine’ implies that it originates from the French Armorique coast. Most Bretons today claim that the recipe must come from Brittany, since all ingredients are typical of the region and because Lobsters have been fished for generations by their local fishermen.

Regardless of the friendly food tug of war between them, this dish combines the best of both worlds- the rapid preparation techniques of the Americans, and the rich flavours and regional produce that the

French are famous for.

Sauté for a few minutes, add the bacon and continue to add the parsley, saute another 1 or 2 minutes before adding the diced tomatoes, salt, pepper, let the water evaporate the tomatoes over a few minutes, then remove the prawns and raise fire.

Add alcohol and flame. Once the flame is out, remove the prawns, add the white wine, fish stock and tomato paste. Bring to the boil and boil 2 to 3 minutes slowly, uncovered to remove vapors of alcohol and white wine.

Cover and simmer in boiling temperature for another 25 minutes. Uncover, taste and adjust the seasoning, add the chili gradually according to your taste.
Put the prawns into the pot and simmer for 5-7 minutes. Switch off the heat. Remove the prawns with a slotted spoon and keep warm.

Evaluatee the fluidity of the sauce and dissolve a portion of the kneaded butter sauce with a whisk, and bring the sauce on the stove and boil the sauce, it will thicken. If we need to thicken, another part of or all kneaded butter if necessary.
Pour the sauce over the prawns and serve.

PS: Another way to prepare this dish: stir-fry the prawns, remove and peel them. Put heads and shells in a cheesecloth, tie, crush with a pestle. Put this cheesecloth tied in the pot just after flaming. And the Armorican sauce will be reinforced by the carcasses of prawns and coral in the heads

. Once cooking is complete press the bag with the pestle against the wall of the pot to extract all the sauce.
So you can eat this dish cleanly, but you will not have the pleasure of sucking the heads and skins…

What to Serve with Grilled Shrimp? 17 Delicious Ideas

Should You Be Eating Perch?