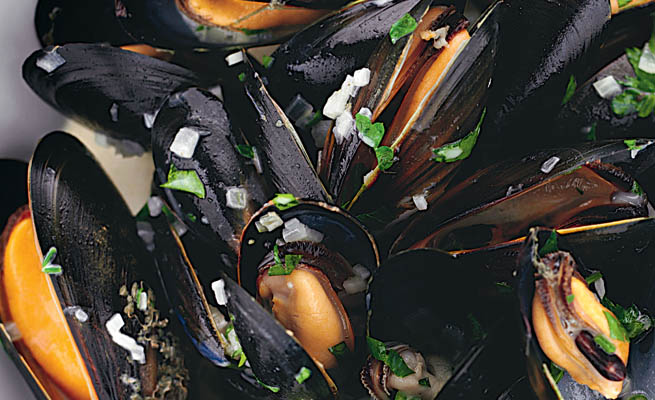 Marinières mussels (or mussels a la marinière) are mussels in white wine sauce. They are traditionally served with fries to compose moules-frites.

This dish has a story. It begins in 1235, when an Irishman named Patrick Walton, after a shipwreck in the Vendée, France, became known for the upbringing of mussels on submerged wood piles.

Charentais dispute the story that explain how the techniqhe of bouchau (a kind of valve) was invented by them in the tenth century. The frock, vest charentaise that descends below the waist, has given its name to a regional preparation where chopped panfried shallots in butter is doused with white wine.

Each year takes place in Lille, the first weekend of September, the famous flea market known internationaly.The most famous dish is mussels and frites.More than 400 tonnes of mussels in 2 days!

The advantage with mussels is that you can consume them all year round!
Belgians tend to eat the mussels marinière. Spain which is the largest producer is mainly using it in the paëlla

.The French have many uses, gratin, omelette, in salad with cream in the famous mouclade, stuffed, in soup, chips, kebabs, casseroles … as the mussel is well suited to the flavors of spices and condiments of the world.

Do you know the history of the mussel? It was developed in the thirteenth century, by chance, by an Irishman who discovered that mussels were clinging to the posts where the nets were stretched to catch birds, and that they collapsed under the weight of the mussels clinging. Therefore there was invented the domestication and breeding of mussels, it is called mussel farming.

They are a high source of omega-3, are rich in iron, phosphorus and calcium.
For one person, it takes a kilo for mussels marinières. The best known is the mussel “bouchot”, small in size but rich in taste.

Before preparing one must eliminate mussels already open or broken. They will be washed carefully and especially the filaments that are attached by scraping and washing under running water.

The mussel is ready when it starts to open wide. Eliminate as mussels that remain closed during cooking.

Raymond Blanc gives his recipe for this Normandy classic. Buy mussels that have already been cleaned and de-bearded to make it even quicker.

Wash the mussels under cold running water in a sink, removing any beards and barnacles. Do not scrub the shells as the colour will transfer during cooking giving an unappetising grey colour to the dish. Discard any mussels that float or remain open when tapped against the side of the sink.

Boil the wine in a small saucepan for 30 seconds then set aside. (This is to remove the harsh taste of the alcohol and leave only the fruity acidity of the wine.)

Melt the butter in a large saucepan over a high heat, then add the onion, bay leaves and thyme. Stir for 10 seconds, then add the wine and bring to a boil.

Add the mussels, cover with a lid and cook for 2-3 minutes or until the mussels open. (Discard any mussels that do not open.)

Add the whipping cream and parsley and stir well. No seasoning is required as the mussels will release a little salt water when they open, which is enough to season the dish perfectly.

Serve the mussels in a large warmed serving dish or four soup plates. Give your guests finger bowls and plenty of good-quality French bread to mop up the juices.