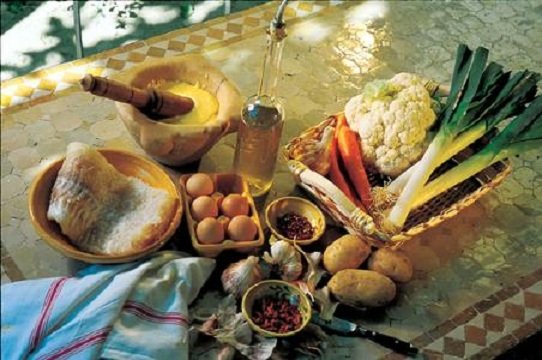 Aioli is absolutely excluded from our table during the warm season and in the cool season is only for lunch, and usually on Friday. The additional carbon that food brings to our bodies and the extra load on the digestive sytem, make it almost unbearable in the hot summer and during our nights if we want to rest. But this reservation aside, it is certain that our “aioli” is in itself a complete meal, infinitely enjoyable, and that is far from lacking in character.

The aioli (or all-i-oli or aioli, Occitan alhòli) is a sauce made of garlic and olive oil, widely used on the north shore of the Mediterranean, from the Valencia region and Catalonia, to Italy through Provence, Languedoc and the County of Nice.

Like mayonnaise, aioli is an emulsion, a mixture of two immiscible liquids. It must necessarily involve a liquid other than oil for firmness. In the traditional version, according to etymology, the sauce is only made of garlic and olive oil. It is then the garlic juice which acts as the second liquid.

If the traditional sauce does not contain eggs, the difficulty of mixing a mixture of only oil and garlic has led most cooks to add another liquid to facilitate the firmness of the emulsion, usually egg yolk and/or lemon juice.

Purists consider it then a garlic mayonnaise and also exclude the use of other less noble elements such as milk, bread or potatoes, supposed to facilitate digestion.

The Provençal aioli (alhòli) is essential and eponymous of aioli garni, traditional dish of cod and boiled vegetables.

The allioli (all i oli) catalan, garlic and oil) has always accompanied fish, steamed or cooked in water (with water are made soups and then fish and seafood are eaten with a sauce allioli or mayonaise), and also kitchen, grilled or baked, and the outdoor cooking: the cargolade, the cousteillade, but also fish, vegetables, grilled meats or roasted potatoes. In Catalonia and Valencia, the allioli is consumed with rice dishes like paella, especially those based on fish, and fideuas.

As with any regional dish, there are as many recipes as families. Some families have even more recipes, giving rise to lively debates during meals. Robert Guédiguian in such a scene immortalized the fight in ‘Marius and Jeannette’.

For some, a good aioli should be smooth, near the consistency of flan, very dense. Others say it should be the same consistency as mayonnaise. Doses and proportions remain at the discretion of the chef. For a beginner, not accustomed to garlic, there must be half a clove to a clove of garlic per person. Connoisseurs prefer to add more.

Like all traditional recipes, several versions exist according to local traditions.

Note:  Escoffier does not use olive oil or does not specify. You can vary the amount to your taste of garlic, oil and lemon juice.

Peel the garlic and remove the seeds if necessary.

Add the egg yolk in the garlic pulp, mix with a whisk.

Gradually add the oil while stirring vigorously with the whisk.

Continue to add the oil gradually while mixing, until the mixture is hard enough.

Note:  Like mayonnaise, aioli is an emulsion which must contain a certain amount of moisture compared to the proportion of fat. Here the moisture is carried by the yoke and garlic pulp. If the mixture is too firm before the incorporation of all the oil, add a little lemon juice to liquify.

Another recipe, simpler, more traditional, but harder to achive:

In a stoner mortar, rub garlic cloves, salt and add olive oil and sunflower oil (half and half) by pouring a continuous, very small quantity of oils while constantly rubbing the aioli with the pestle. It takes quiet some times and expertise, but this aioli is much better and more traditional than the former “modern” recipe.