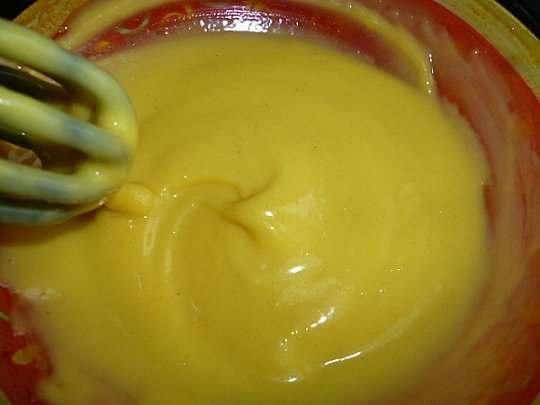 A science program on TV has taught me many things about mayonnaise. Mayonnaise, what is it? These drops of water intimately mixed with oil drops. Simply mix the oil (fat) and lemon juice or vinegar (water) so that the fat molecules surround the water molecule, which gives specific consistency of mayonnaise.

But the water cannot possibly mix with the oil. Thus, to obtain the desired consistency, add a surfactant to the mix: the egg yolk. You should know that with a pinch of egg yolk, you can do a very successful mayonnaise. In fact, with one egg yolk, it is possible to make … 24 liters of mayonnaise! Well, we will not quibble: there is also a matter of taste, of course. But the scientific show explains a very funny story: The egg of the extreme.

Consider a scenario: you dream of eating a boiled-egg mayonnaise. You open your fridge and … Caramba! There is only one egg! So using the trick noted above, you sample, using a syringe with a needle, a drop of egg yolk with which you make a mayonnaise. Then just boil the egg, peel and serve with mayonnaise: You just made an egg extreme!

This is well known, for a successful mayonnaise, it is imperative that all ingredients are at the same temperature. And our scientific guy proves the contrary. He takes a very cold egg, oil at a warm temperature and prepares its mayonnaise turning in any direction, a left move, a move to the right, etc. .. And the mayonnaise is as good as another. Go figure …

Joseph Fabre says, for its part, that mayonnaise is an alteration of the word magnonnaise derived from Magnon (Lot-et-Garonne), one cook Magnon was first popularized in the South, he notes that the sauce was named either mahonnaise, Bayonnaise and mayonnaise.

The French city of Bayonne (sauce “in Bayonne”) could also give its name to this type of sauce by orthographic transformation.This explanation would seem to be confirmed by the fact that there is no written record of the sauce to “mayonnaise” before the beginning of the nineteenth century, so long after the capture of the city of Mahón.

A final hypothesis, more controversial, and issued by the linguist and historian Nicolas Lepreux suggests that mayonnaise come from the Mayenne region, and the “e” will be changed into “o” over time: the apocryphal story said that the Duke of Mayenne would have eaten, at the eve of the battle of Arques, too much chicken seasoned with a sauce, remarkable, so the next day he fell from his horse and lost the battle.

The original recipe of mayonnaise is made of egg yolk, oil, salt and pepper. You can add different ingredients to enhance the taste like lemon, mustard, the latter improving the firmness of the emulsion. It can be slightly sweet, like in Germany and the Netherlands.

The sauce can “turn” (deteriorate), various tricks have been proposed for  cooks, for example, you can add a bit of flour to raw eggs.

It supports preferentially cold preparations and is an essential element in certain foods such as tomato with shrimps, Russian salad or egg mimosa. It is also strongly associated with chips but also serves as an instrument for other sauces, such as Cocktail sauce, Gribiche sauce, Ravigote sauce, Remoulade sauce, Pink sauce, Tartar sauce.

Mayonnaise must rise, that is to say, emulsify, and the whole mass is transformed into a smooth and homogeneous mix. The principle is as follows: egg yolk is a surfactant that allows an emulsion of oil in water. Water can be replaced by any element that contains it, for example mustard, vinegar or lemon, which also alter the taste. Adding oil to mayonnaise thickens it while the addition of water causes the opposite effect.

Temperature is an important criterion when making mayonnaise. In fact, high temperatures reduces the apparent viscosity of the oil, creating the risk of inversion of the emulsion. In the opposite, if the temperature is too low, the energy of the colloid mill will not be transferred efficiently to the droplets and not get a sufficient viscosification.

The recipe, basic, can’t fail, for a nice bowl of mayonnaise:

Mix the egg yolk and mustard, salt and pepper. Add oil gradually in a thin stream, whisking (with a whisk or hand mixer onmedium speed) to start the emulsion. Add the remaining oil gradually, always beating. Finally stir the vinegar or lemon andadjust the seasoning.

To preserve: cover with clingfilm without air, it must touch the surface of the mayonnaise. Homemade mayonnaise will keep for 1-2 days, often more.