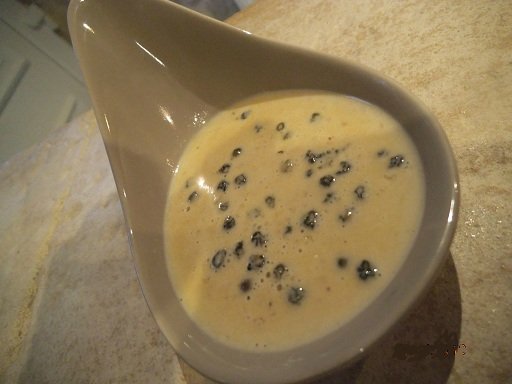 Steak au poivre or pepper steak is a French dish that consists of a steak, traditionally a filet mignon, coated with loosely cracked peppercorns and then cooked. The peppercorns form a crust on the steak when cooked and provide a pungent but complementary counterpoint to the rich flavor of the high-quality beef.

The peppercorn crust itself is made by placing the steak on a bed of cracked black (or mixed) peppercorns. Typically, the steak is seared in a hot skillet with a small amount of butter and oil to cook it.

The steak is seared at a high temperature to cook the outside quickly and form the crust while leaving the interior rare to medium-rare. The steak is then left to rest for several minutes and then served.

Steak au poivre is often served with a sauce consisting of reduced cognac, thick cream, and the fond from the bottom of the pan, often including other ingredients such as butter, shallots, and/or Dijon mustard.

Until 1522, pepper was a symbol of power and virility throughout the West, where it boasted virtues as aphrodisiac. It had a value equal to the gold or silver. During its victorious entry into Rome in 408, Alaric, king of the Visigoths, was given 3000 pounds (approximately one tonne, the equivalent of two million francs current). In most loot or “taxes” in the Middle Age, it found its place.

Pepper is a very old spice. The people of India have been using it for several millennia. Several Sanskrit texts attest. Its use spreads in the kitchen of the sixth European century before our era.

The Romans preferred the pepper “long”, grain smaller, glued together, and the flavor acrid. They used to put into the wine when it was beginning to become sour.Today, we rather prefer the pepper “round”.

It arrived in France in the twelfth century with the first major travelers, itinerant monks or Arab caravans. Trade Pepper was at all times in the hands of the Middle Kingdom. The Portuguese and the Dutch who brought it back in Europe during the Renaissance had to pay high commissions.

To escape this mafia, the French planted pepper in Reunion and Mauritius. But enough History. It is not always easy to find a good pepper steak when we are located outside of France. However, this is an easy recipe to achieve. Proof:

Prepare the sauce by heating slowly the butter in a pan. Drop the peppercorns and continue to heat over medium heat for 2 min. Flame with the alcohol, being very careful. Then add the cream and reduce another 3 min.

Hint: It is better to cook the meat first, then use the same pan to prepare the sauce, reheat the meat by putting it in the finished sauce for 30 sec.

Top the meat with the sauce. Note that it can be served on fish filets or chicken, or on vegetables for vegetarians.