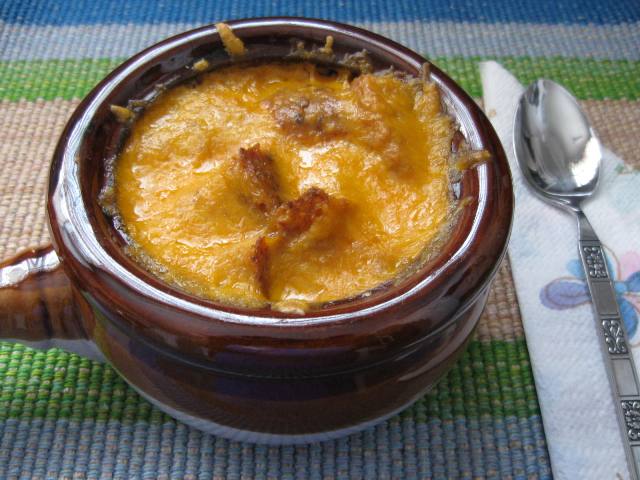 The onion soup is prepared by browning in fat sliced onions. Water is added, then let it to simmer a bit before putting the soup into bowls, which go in the oven for a few minutes.

Soup: Peel the onions and slice them into thin strips.

Croutons: To prepare the onion soup au gratin, roast the bread sliced in toaster or oven

Soup: In a large saucepan, sauté the onions in a mixture of butter and oil, stirring constantly. They must turn blond without burning.

Croutons: Place a slice of toast in the bottom of 4 bowls or other ovenproof individual containers.

Soup: When the onions are translucent, add the flour and let it brown, stirring with a wooden spoon.

Croutons: Pour the soup over the bread slices. Sprinkle with grated cheese and grill in the oven. You can pass the bowls under the grill (watching for burning) or in a hot oven (Th. 8) for 10 minutes.

Soup: Pour in 1.5 liters of cold water. Salt and pepper.

Soup: Bring to the boil and cook the onion soup to simmer for 20 minutes.

The onion soup is prepared by browning in fat sliced onions. Water is added, then let it to simmer a bit before putting the soup into bowls, which go in the oven for a few minutes.

This soup is served hot, as an entree. It can be decorated with grated cheese, croutons added at the last moment and various spices.

This is a soup for the lunch of an ordinary family. But it is also a way to dine in the late evening. It is then eaten outside a meal, as a thick beverage.

Onion soups are popular at least since Roman times. They were throughout history often considered a food for low-class people, because of the abundance of onions and ease of cultivation.

The modern version of this soup came from France in the seventeenth century, made of bread or croutons, beef broth and caramelized onions.

Legend has it that the soup was invented by Louis XV. Late at night, when he was in his hunting lodge, he discovered that he had such provisions as onions, butter and champagne.

He cooked the three ingredients and made the first onion soup française. Other stories attribute the authorship of this specialty to Louis XIV.

Nicolas Appert, the inventor of canned food, was foremost a cook and confectioner, and he learned cooking from his father at the Hotel du Palais Royal, he also apprenticed in the best establishments of its city Chalons-en-Champagne, and in particular the hotel La Pomme d’Or. It is in this inn that stopped each year the Duke of Lorraine, ex-king of Poland, Stanislas Leszczyński, on the road to Versailles to visit his daughter Queen Mary, wife of Louis XV.

One evening he was served this soup of “ognon” he found “so delicate and careful, he would not continue his journey without having learned how to prepare himself the same.Wrapped in his robe, His Majesty went down to the kitchen, and insisted that the chief operate in front of  his eyes.

Neither  smoke, nor the smell of onion, which tore him to tears, could not distract his attention while she watched, took notes, and went up on his car after being certain to possess the art of making this excellent onion soup. ” Nicolas Appert dedicated to him the soup, giving it the name” onion soup to Stanislas “and he published the recipe in his ‘ book for all households or the art to keep for several years all animal and vegetable substances’; 1831

“One removes the top crust of bread, you break into pieces that are presented to the fire on both sides.

When these crusts are hot, rubbed with fresh butter, and represented to fire again until a little toasted, then they are placed on a plate; during the time we fried the onions in butter, we usually put three large ones cut into small dice, they are left on the fire until they become a beautiful blond, a little dark hue that comes to them indeed equal in the stirring almost constantly, is then added crusts, stirring constantly, until the onion is browned.

When they took enough color, to loosen the pan it is wetted with boiling water, put the seasoning and water needed, then allowed to simmer at least a quarter of an hour before serving. ‘

The story does not say if, once in Versailles, Stanislas prepared this soup to his son the King of France. But, once in court, the reputation of the “onion soup” was made. While taking a different meaning than just that of dish: its ability to hide the smell of wine and spirits, not a drink or two but a marked consumption.

The reputation of the onion soup became one of the “soup of drunks.” This reputation appealed to mainly medium and small people who could thus enjoy more opportunities for drinking, eating and eat a dish of the nobility, not as delicacy, but to hide the smell of wine.

A society for the praise of the onion soup, consisting of twenty members, existed during the Restoration. The members met every three months for a dinner that always begins with one onion soup.

They had vowed to meet regularly and until each of them had entered the Academy, which was done in 1845.

In Auvergne, this recipe was traditionally made by shepherds. They went in with transhumance livestock, and ingredients are easy to carry: onions, lard, they were there with their cheese milk cattle, cows or sheep.

If you want to make a recipe close to “tradition”, replace by lard the butter, and cheese by the Tome cheese, if possible, Saint-Nectaire. Wine was replaced by water-de-vie (plum, pear …), the Auvergne is not a wine country, or very little.

What to Serve with French Onion Soup? 16 Delicious Sides