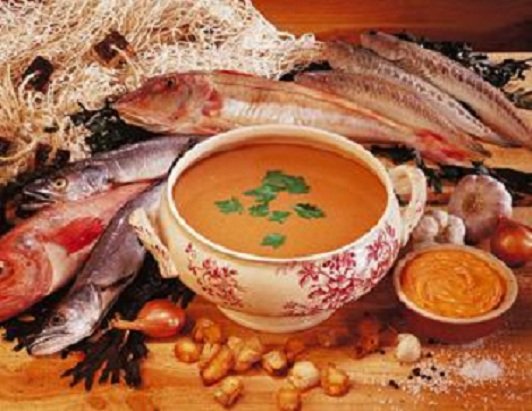 The fish soup recipe is not well defined but a generic term for all soups, usually thick, made from various edible marine animals.

We distinguish soups made with noble fish, like bouillabaisse and bourride, and popular traditional soups made with fish, crustaceans, and shellfish in various proportions, sometimes mixed with vegetables (including potatoes, carrots) .

In the coastal countries north of the Mediterranean (Spain, France, Italy, Croatia), it is traditionally manufactured as a soup made of rockfish, onion, milk or cream, white wine, olive oil, and other ingredients. Rockfish are generally full of bones, they should be cooked and then sieved or sorted.

Usually, you put saffron in this soup, but it is not a requirement, and it varies according to to use, from one region to another.

On the French Mediterranean coast and in Italy, the “poor man’s soup” is made from a broth that is obtained with shellfish and seafood collected on the rocks, usually a few green crabs and some mussels.

For many natives of the Marseille coastline, this soup is a love story. The ‘Aniston’s (kids) fishing with lines and catching ‘favouilles’ (crabs), the companion who tries his harpoon and brings everything to the shed where Mireille cooks some tomatoes, fennel, and spice from the garden, adorns this flavored soup that is the pride of all and is an excellent introduction to the grilled sea bream.

It is true it smells like summertime shared with family, the smell of simplicity. With freezers, the soup is sometimes the feast of the end of summer after a season on Sunday. It acts as a main dish with a salad of tomatoes input, goat cheese, and a fruit tart. A meal becomes a ritual end of holiday memories for cold winter.

Coarsely chop the vegetables. Sauté in olive oil, and then add the fish.

Cover with cold water, add the aromatics and cook for 45 minutes over low heat.

Then pass the preparation vegetable mill (coarse grid), discard all waste and then board a vegetable mill (small grid). Adjust seasoning if necessary. Serve with bread rubbed with garlic and rouille.