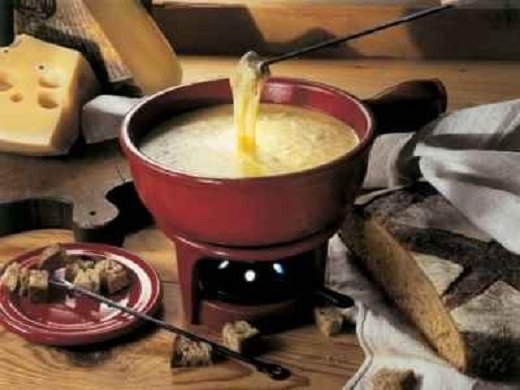 There are many specialties from the mountain of which we willingly revel after a day on the slopes or to rekindle fond memories with our nostalgia passed at the station, or invoke with pleasure the mystique of the mountain.

The fondue is all these recipes with cheese and its preparations, as diverse as they are, do not have lost their taste and social interest, because they allow guests to meet without one of them required to stay at the stove.

It is in the region of Fribourg in Switzerland that the invention of fondue certainly originates. Long periods during which the Swiss shepherds remained isolated in the pre-alpine pastures born saw the beginnings of what today is a national emblem.

These shepherds reused leftover cheese and stale bread to form a nutritious and economical meal. The recipe has spread slowly but surely to the rest of the region, to finally reach the rest of the country. Serving militia men adopted it very quickly and contributed largely to its dissemination.

The story goes that they had brought back the fondue to their homes, so long as the preparation of the recipe was exclusively male. Today, fondue is prepared in many parts of France, but also in the rest of Europe, and it would seem even Mexico.

Although traditionally melted with two Swiss cheeses of excellence such as Gruyère and Emmenthal, the recipe has evolved, leaving the Helvetian fundamental to adapt to regions in which it operates.

So, as you may have noticed in Savoy, the Comte (cousin of Emmenthal) and Beaufort are the preferred ingredients of the recipe, in Normandy Camembert and Calvados, and in Great Britain Lancashire, Cheshire and beer.

If each fondue presents differences, it is however necessary that the cheese used is generous and fragrant, it is of boiled milk (Emmenthal, Gruyère, Comté, Beaufort) or raw milk (Lancashire, Cheshire).

The required ingredients and utensils

To achieve this preparation you will need to bring a pot (rather like a deep pan of clay or cast iron) and a small stove, but of course fondue forks.

Rub the fondue pot with the garlic, then put to melt the cheeses with white wine and kirsch and spices.

Dip the pieces of bread into the melted result and taste cheese!