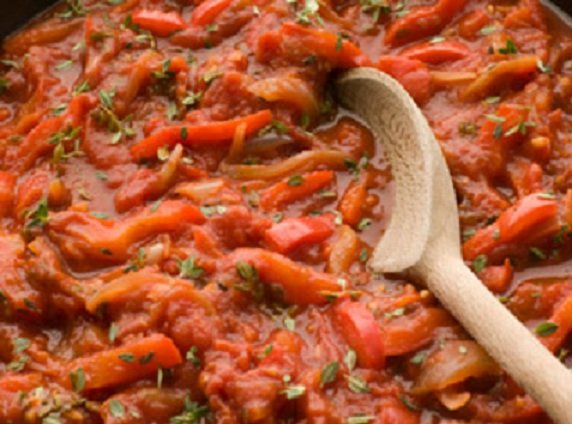 Piperade (from the Occitan béarnais piperade Piper: red pepper piperade in Spanish) is a gourmet accompaniment of Basque origin that is usually served with meat and fish. The name comes from biper (Basque chili). There is also a piperade béarnaise.

The sauce is prepared in a casserole, basking in various vegetables or vegetables. These may vary but the spice must not miss. Species that are used are: green pepper, red pepper (in the French Basque Country, it is generally Espelette pepper), onion and tomato.

Piperade can also be prepared as a main dish by adding the cazuelita (small cazuela) so that an egg coagulates. The colors reflect the coincidence of colors of Ikurriña (Basque flag): red, green and white.

Piperade is commonly consumed with Bayonne ham or feta cheese and red wine, such as Buzet, Madiran, Irouléguy or asimilar wine from this region.

Every year since 1998, on 15 August, the town of Salies-de-Béarn hosts a party celebrating the piperade. Teams compete in a culinary competition for the trophy “king of piperadère” which rewards the best piperade.

Realization of the recipe:

Chop the onions into small dice; peel and crush the garlic cloves. Boil and peel the tomatoes, then chop coarsely whileremoving seeds. Cut lengthwise and remove seeds of sweet peppers Biper Eztia, then cut into pieces of about 5 cm long.

In a skillet, add a tablespoon of oil and put cold garlic. Heat. When scorched, remove, and then cook fast and hot the peppers 2 min. Reserve.

In a skillet or saucepan, heat a tablespoon of oil and cook the onions with a pinch of salt. Pour tomatoes over the onions, add a little thyme, a bay leaf, garlic browned, salt and a pinch of Espelette pepper. Reduce heat to low.

After about half an hour, when the sauce thickens, add the peppers and cook together a quarter of an hour. Cut the acidity progressively by adding sugar if necessary.

Broccoli Spear – What Are They? How Are They Made?