In France, ratatouille is a culinary specialty of Nice, also found throughout Provence. It exists in many countries under different names. It is a stew of various vegetables.

Cut the remaining vegetables into dice.

Fry in a pan, oiled each ingredient separately (except tomatoes and garlic).

Put all the vegetables together with the bouquet garni.

And simmer for 45 minutes.

Salt and pepper to taste.

The word “ratatouille” comes from the Occitan ratatolha. It is also used in all languages, including English; ratatouille is also said as Valentine in the south of France and piperade in the Basque country.

With garlic, olives, and onions, it is the “Bohemienne du Languedoc.” The origin of the dish is in the area around Provence and Nice.

Originally, the word “ratatouille” means 1778, a motley stew. The abbreviation “rata” means, in military slang, a mixture of beans and potatoes and mixed vegetables and fatty meat. The rata is, in fact, the basis of the military canteen, quick and easy to make.

It is composed of pieces of cooked vegetables, especially eggplant, onions, zucchini, peppers and tomatoes, and garlic. Like any recipe “generic,” there is no precise recipe but guiding principles.

For the ratatouille, two methods are possible: cooking all of the vegetables together or cooking vegetable by vegetable separately.

Defenders of the Provençal tradition as the chef’s verge or Gedda, advocate frying the vegetables one by one and passing the capsicum over the flame to get rid of the skin and give a taste of smoke. 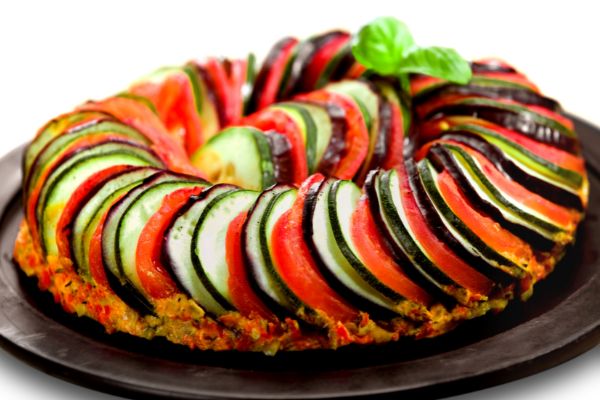 What should you have with Ratatouille?

Traditionally, it is advisable to accompany these vegetables with a rosé wine from the vineyards of Provence or a red wine such as Vin de Pays d’Oc or white wine, like St. Joseph ( AOC).

Other countries near the Mediterranean also prepare the same type of recipe. The Catalan dish “samfaina” and the Majorcan “Tombet” are other versions of the same dish. The Maltese language version is called Kapunata, very similar to the French recipe, it comes with grilled fish.

In Italian, it is called caponata, Spanish pisto, Lecsó Hungarian, in Bulgarian and Romanian ghiveci, in Greek briami (but including potatoes), and the Croatian and Serbian version called đuveč contains beans and rice.

In Turkey, ratatouille is presented in a stuffed eggplant under the name of Imam Bayildi (translation: The imam is fainting).

In the collective imagination, ratatouille seems to be a culinary Mediterranean tradition that has always existed …..

And yet, if we look more closely, it seems difficult to imagine that the ratatouille as we know it today may have been invented before the sixteenth century. For this, it suffices to dwell on the time of arrival in Europe of the vegetables that make up the ratatouille to determine its date of creation.

A Ratatouille recipe “classic” consists of fresh tomatoes, aubergines, peppers, and courgettes, plus garlic, onions, and olives added. However, the eggplant that comes from India arrived in Europe in the sixteenth century.

It is fun to take one at a time the main components of ratatouille and determine their origin:

– Eggplant is a vegetable traveler who comes from India, which appeared in Europe in the sixteenth century when it was seen as a poisonous ornamental plant.

– Tomato comes from pre-Columbian America, from Mexico, and was brought to Europe in the sixteenth century; it was then the size of a cherry tomato and has only slowly spread in our country: its arrival in Paris during the Revolution with volunteers from Marseille (and the National anthem La Marseillaise).

It will be cooked under the arches of the royal palace in the famous restaurant of the Directoire, the “Freres Provencaux,” and at the time of Brillat Savarin, under the Restoration, it was still used to color red sauces.

– Zucchini is of American origin. Only in the family of gourds, melons and cucumbers are from the Old World. We did for long serve only the squash. Zucchini are squash harvested before maturity: the first meaning of the word dates from 1929.

In view of the arrival of these vegetables on the plate of our ancestors, it seems difficult to imagine today that the famous ratatouille who treats us in the summer may have been invented before the seventeenth century!

Broccoli Spear – What Are They? How Are They Made?