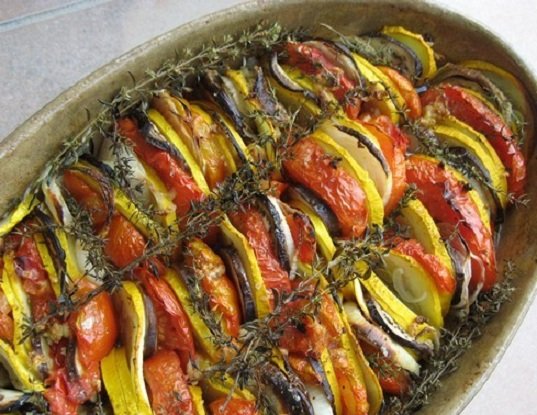 Tian means, on the one hand a utensil traditional Provence, originally a simple flat earthware or glazed earthenware in color, and secondly, a culinary preparation which is typically Comtadine (from Avignon) adopted by a large part of Provence to be now considered a specialty provençal dish.

Paul Peyre, linguist and etymologist of Provencal, highlighted the common root of the word tian from Provence with tagine, Berber word designating both the dish and the pot. One finds a sequence consonant t / ij / n on one side and the other of the Mediterranean. Historical Dictionary of the French language – Alain Robert Rey tells us that the words tian and tajine are borrowed from French, one in Old Provençal, the other Berber “from the Greek têganon [ …] “frying pan”, “flat earth” without the technical word etymology being known. “

This dish, which requires slow cooking, is done with the vegetables baked first in the oven. During the Middle Ages, it was placed in the oven or in the communal oven. Until the mid-twentieth century, it was the baker’s oven which served as substitute or even the bread oven on the farm.

Originally, the utensil used to prepare the dish is a shallow rimmed thick tapered dish to be put directly on the table. It served in bowl of all-trades: washing, vegetables or storage … It looks like the tagine dish on the other side of the Mediterranean. Now the dish is glazed and colorful. Originally the cooks took their largest dish which supported the residual heat of the communal oven, the baker or the baker’s oven on the farm for several hours. It cooked together all the vegetables, as terrines. The goal is to leave the cooking unattended, it is economical as it is left to cook when the oven has been turned off.

Traditionally in some tians was introduced some goat cheese. Since the 1980s, the appearance of the mozzarella changed tastes and it is introduced into thin slices between layers of vegetables.

Peel and wash the vegetables. Cut into slices.

Salt and pepper. Crush the garlic and sprinkle the dish with thyme.

Bake the dish for 45 minutes. Wait for a little for it loses its heat before serving.