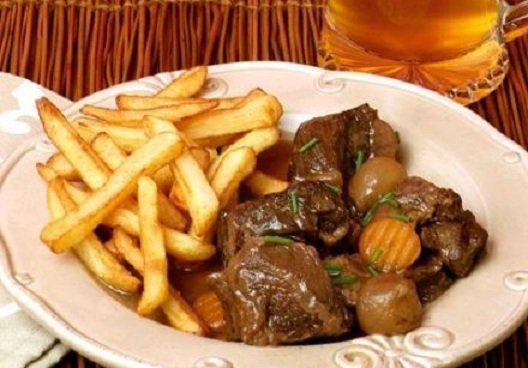 Here is what we would describe (but this is only our opinion) the beef bourguignon of the “ch’nord”! Except that Burgundy is not the region beverage, but beer. Here and not just any beer: a beer Belgian or Ch’ti. (Ch’ti is the nickname of the local Nord dialect, as well as its inhabitants).

Friends of the North, Ch’ti or who live in this nice area, this Flamish stew recipe is dedicated to you.

We have not found the origin of this dish, and you’ll find plenty of history on the stew (saying that it is imported in the North by Spanish who have invented it, saying that the Burgundians were inspired by Flemish stew to create beef bourguignon…), but I have not found anything for sure.

The Flemish Stew is a dish from the North, which is also found on the other side of the border, in Belgium. It is a long simmered meat in beer sauce. It is reinforced with gingerbread, spread or not with mustard.

Obviously as you talk about beer: blonde, brown, amber … the taste will be more or less pronounced. We can make this stew with Belgian Trappist beer, Rochefort the No. 10. This beer is amber in color and very fragrant, brewed at high-fermenting heat and conceived by the Trappist Abbey in St Remy in Belgium.

But to make the stew, you can use the Ch’ti blonde or amber, the Chimay blue or red … The important thing is to use a good beer.

This is a good recipe of the North, so the mandatory accompaniment: French fries! But it is not the children who will balk about the lack of vegetables.

We hesitated a lot before writing this recipe. We was a bit shocked by some sweeping assertions on some websites, which insist a little too heavily on the antagonism Flanders / Wallonia.

First some remarks which contradict certain statements read on sites that gave us a little trouble: this recipe is not Belgian, but Flemish, in the modern sense of the term, since it can be “Flemish” and “French or Belgian.” French natives of the North Sea and Lys were Flemish.

Flanders and Hainaut are transboundary. Moreover, the Walloon have made theirs this recipe and they were right though, if they leave the Flemish character with it.

Write Carbonnade with two “n” is nonsense for this recipe: a carbonade is a dish that has long simmered on a charcoal stove (charbon) on the less hot spot of the iron plate, a carbonade is cooked on a brazero ( BBQ!)

Another note: this recipe marks the predilection of the Flemish people for the sweet and savory and the bitterness of certain foods.