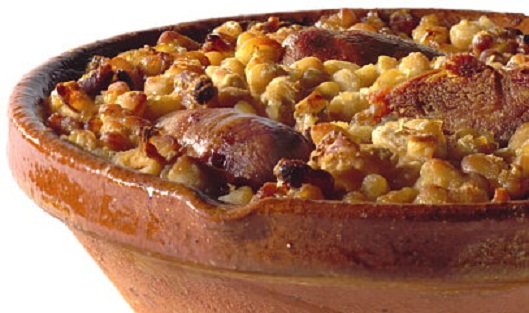 Trying to trace the history of the birth of cassoulet is not an easy task when you know that the heated rhetoric can happen. However, with the iconographic analysis, cookbooks, medical treatises, archeology and local history, we provide many clues that allow us to understand the birth of this mythical dish and its evolution.

The origin of cassoulet dates back to the medieval period. This was known as stew meat dish with sauce simmering long before the fire.

A great work of cooking litterature mark the fourteenth century: “Le Viandier” written by Taillevant, whose real name was Guillaume Tirel, cooked for several kings for 60 years. In his book, presumably dictated, Taillevant is heavily concerned with pies and stews, lamb stew or with pork and beans.

Historians believe that Taillevant could have been inspired by a book written by Mohamed Arab in Baghdad in 1226, which reveals a highly refined cooking. This book uses a deployment of spices, herbs, legumes, and mutton.

Some historians believe that the origin of cassoulet is Arabic. It was they who, in the seventh century, have introduced it into the south of France, the culture of a white bean and taught the locals how to prepare this legume. Mutton stew with white bean recipe is among the  Treaty of cooking of Baghdad.

Taillevant picked this recipe in his Viandier.

Legend places the birth of cassoulet during the Hundred Years War.

But no archive mentions this tradition, which was documented for the first time in the early sixteenth century. Legend has it that during a siege of Castelnaudary by the English people, threatened with famine, pooled what they had to feed the soldiers of the city. Bacon, pork, beans, sausages, meats were put to simmer in a large bowl.

Invigorated by the meal, the soldiers chauriens threw the English out of Lauragais and to the edge of the Channel!

This episode may be referring to the sacking of the city by the Black Prince in 1355, which was not a siege but a fire. The dish that gave birth to the cassoulet is a stew. The “Viandier” Taillevant mentions that fact, the “Hericot” which comes from the verb “héricoter” in old French, which means cut, chop into small pieces.

The “héricot” was a mutton stew, stew made with beans, turnips and aromatic herbs such as parsley, hyssop and sage. This dish, “meal of the poor” was a full meal, which allowed leftovers.

It evolved over time depending on what you put into it. This stew was put to cook at the end of the fourteenth century in a dish of a particular shape, the casserole, which was created in a village near Castelnaudary and, over time, gave his name to the mythical dish.

The casserole was made by potters in Issel, a small village 8 km north of Castelnaudary. In 1377, under the auspices of William Plane, lord of Issel, John Gabalda, an Italian, started in this place a pottery workshop.

Artifacts rather than luxuries,  he made for housewives, cookers, colanders, pots, oules (cooking pots for boiling before the fire). The casserole, sort of flared bowl, was therefore known in the Lauragais since the fourteenth century. And it is this terracotta from Issel which gives the stew its taste so special.

Cassoulet, as we know it today, appears at the beginning of the sixteenth century, as it is no longer the broadbeans that we will cook, but beans ingot.

The ingot is a bean, Phaseolus arborigineus, a particular variety that has emerged in an area extending from Mexico to Peru and Colombia. It is a climbing vine, very strong, giving small black seeds. Thus the bean won our country.

Brought by Christopher Columbus, this bean was imported into France in 1530. In 1528, Pietro Valerio, an Italian priest received from Pope Clement VII a few beans as a American botanical curiosity.

He cultivated specimens and discovered its usefulness and its aphrodisiac properties! Alessandro de Medici offered a bag of these beans to his sister for her marriage to the Dauphin of France, the future Henry II.

More locally, Catherine de Medici, became Countess of Lauragais in 1553, likely played a role in imposing the culture of this new plant in Lauragais. White seeds gradually sown and cultivated, they win the entire Southwest. A little later in 1637, a priest  from Agde cultivated beans and started the fashion of those white dots called Flaviols or Mounjetas in the Tarn.

Culinary traditions evolve significantly until the seventeenth century, considered the great century of French cuisine. The Cassoulet which was then estouffet or stew takes its name officially in the eighteenth century.

In 1836 moved to Castelnaudary, the first industrial factory of cassoulet. This is the house that the company Bouissou branded “La Renommee”.

In 1929 Prosper Montagné, famous chef in Paris of Carcassonnaise origin, recognizes the supremacy of Castelnaudary cassoulet in his book “Le Festin Occitan”: “The cassoulet is the God of Occitan cuisine.

One God in three persons: God the Father is the cassoulet of Castelnaudary, God the son, who is one of Carcassonne and the Holy Spirit that of Toulouse. ”

It seems undoubtedly the cassoulet was created in Lauragais, although we have seen, its origin is from a rustic stew, which after all, could be anywhere and found over centuries its variants such as Carcassonne and Toulouse. But Castelnaudary was able to capture the casserole, beans and bullion to better refine the recipe that was made official in 1909.

The Tradition Chaurienne gave this dish a flavor unmatched by bringing to bake to the baker, heating with wood from the Black Mountain.To make it even tastier, it is recommended to soak the beans in the spring water which supplies the city since 1853.

Drain the water, put the beans in a saucepan with three liters of cold water and boil for 5 minutes. Turn off the heat, drain the water and set aside beans.

Proceed with the preparation of the broth, again with 3 liters of water, the rinds cut into wide strips, a poultry carcass or some pork bones and, according to your taste a few onions and carrots. Salt and pepper (generously). Cook the soup for an hour and then strain the broth and recover rinds.

To do this we use the terracotta dish named “Cassolo” (now the “casserole”), which gave its name to the cassoulet, a dish quite hollow of clay for oven.

Line the bottom of the casserole with chunks of rind add about a third of beans add meat and pour over the rest of the beans Arrange sausages by pushing in the beans and sausages to remain above apparen Complete the casserole by pouring the hot broth that should just cover the beans Pepper mill at the surface and add a tablespoon of duck fat used to brown the meat.

Bake at 150 ° / 160 ° (Thermostat 5 or 6) and cook for two to three hours.
During cooking, will be formed on top of the casserole a golden brown crust that you will push in repeatedly (7 times the ancients said).

When the top starts to dry, add a few tablespoons of broth.

If you prepare this stew the day before, it should be warmed in the oven at 150 ° for an hour and a half before serving. Do not forget to add a little broth or, failing that, a few tablespoons of water.

Very important! Serve a bubbling cassoulet in its casserole, spoon it gently without stirring, it will be better and do not hesitate to help yourself for more!

This is a dish that will take you to the popular culinary paradise!