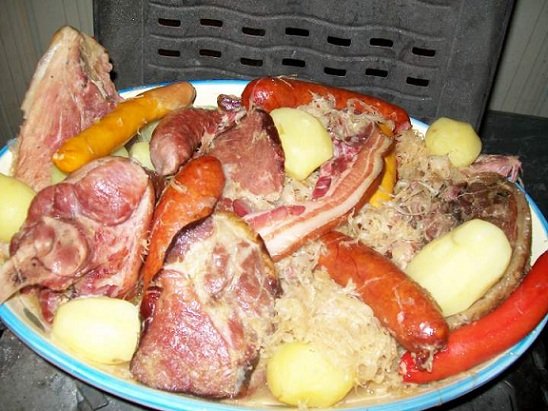 Sauerkraut (the German Sauerkraut, IPA pronunciation: zaʊ.ɐ.kʁaʊt, by the Alsatian surkrut) is a dish traditionally eaten in Germany, Bulgaria, Poland, the Netherlands, the Czech Republic, Hungary, Serbia, Romania, Luxembourg, Switzerland, Chile, the United States and China. In Chile, sauerkraut is part of the traditional completo chileno.

In France, it is a regional specialty of Alsace and in China, of the Heilongjiang Province. In Italy, in the region of Trentino-Alto Adige, it has since 1999 used the term “traditional food products” (PAT), an Italian name that is not recognized at European level.

It is a dish made of cabbage finely chopped and subjected to lacto-fermentation in brine. The origin of the word refers to Sauerkraut in German, literally “sour cabbage” altered to “cabbage” and “crust”. In France it is derived from the Alsatian dialect. By extension, the term also refers to the dish cooked as sauerkraut with its accompaniment.

This method of preparing cabbage come from China, where, according to legend, it was invented in the third century BC by the builders of the Great Wall to resist the cold.

If the Great Wall was originally intended to protect against hordes from the north, the Mongols or Huns, it is likely that it is Attila and the Huns who have, after failing to conquer China, then brought their conquests to the west through Bavaria and Austria before reaching Alsace in 451.

This is the probable date on which the preparation of cabbage appeared in these regions, who used as well the lacto-fermentation for the conservation of other vegetables including turnip (salted turnip).

In France, the first references to cooking cabbage so prepared dates from the fifteenth century, the texts of the sixteenth century attest to its presence at the table of the monasteries.

In the seventeenth century, it is found under the name of “Kompostkrut” (cabbage compost), and in the following century it became widespread in Alsace, in a part of Lorraine and in Baden-Wuerttemberg their neighbor.

In France, it was not until the nineteenth century that it was used to designate the cabbage dish cooked with its accompaniment. Fermented cabbage is usually cooked in white wine but can also be in cider, beer or champagne. Other variants, more recent, replace meat and smallgoods by an assortment of fish, called “seafood sauerkraut”, or use soy sausage in vegetarian sauerkraut.

Depending on the amount of salt added, sauerkraut keeps two years without problems

Aube department in France is the third producer of sauerkraut, behind the two departments of Alsace.

Sauerkraut, easy to maintain and rich in vitamin C, is a landmark development in the food, as it improved the nutrition and health of people in the winter. It helped, but not negligibly, the economic development by helping to fight against scurvy, of which sailors were often victims during long sea voyages.

Without its meats and taking into account its salt, sauerkraut is particularly dietary and facilitates intestinal transit.

In 2007, the average annual consumption of sauerkraut is estimated at 800 grams per person in France.

On January 1, it is customary for a family to eat a sauerkraut in the region of Liège in Belgium. They then placed a coin under the plate in one’s hand or in his pocket. This symbol is supposed to bring prosperity all the year round.

Slice the onions and shallots.

Sauté onions and shallots in pork fat. Reduce the heat under the pan and put aside, cut bacon into pieces.
Give a quick wash to sauerkraut. Withdraw some ,squeeze dry and cover the bacon. Evenly distribute half of berries andspices. Add the pallet in the middle of this nest of sauerkraut and cover with the remaining cabbage, spices and berries.

Add beer, water and close the cooker. Cook for 1 hour after the first simmers.

After 1 hour, stop cooking. Add peeled potatoes (you can add a little salt) and close immediately. Cook for about 20 minutesdepending on size of potatoes.

Meanwhile, cook sausages in water. After ten minutes for Montbeliard, barely half for Vienna sausage in simmering water.
Once finished cooking, arrange on a plate to easily serve a little bit of everything.
Serve immediately or keep warm in the oven.