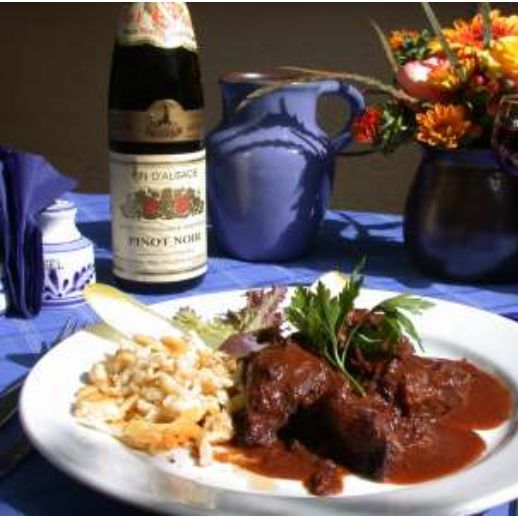 A civet is a stew prepared with chives, that is to say, onion, or other edible bulbs. The stew can be prepared with red wine. The sauce is mixed with the blood of the animal (which was not always the case in the history of this dish)

We do not know if the word stew is originally French or Occitan. The term derives from civet cive and chives and therefore mean “dish prepared with onions, garlic or chives.” The term of chives itself is from the Latin caepatum (from caepa, “onion”).

In the Middle Ages, the hare was little used in stews. Similarly, blood made a late appearance in the sauce because of its symbolism but also the difficulty of mixing to the sauce. The broth resulting from this mixture is today the base of the success of a stew, whose recipe has been set at the beginning of the twentieth century.

In general, one prepares the civet from game (rabbit or hare or wild boar, as is typical in the Val d’Aran).

The hare civet is the true civet named “a la Francaise”. But you can also make a stew of beef, pork, tangue (on the island of Reunion) or lobster (Pyrénées-Orientales). In southern Catalonia, the stew was first cooked with wild cock and later with pheasant.

In Catalonia, unlike from the North of France, white wine can be added with poultry and seafood, and although it moves away from the stew typical of northern France, picada also can be added at the end, just before the blood.

Xenophon in his treatise De hunting makes hunting hare an essential part of the education of the young Greek. In the Middle Ages, the hare is also present in the Treaty of Hunting by Gaston Phoebus.

This little game has long been the favorite prey of poachers. They used a simple method, to locate the lodging, to drop before it a cap or a hat and facing to the wind. The hare, curious, was coming out to recognize the object placed without paying attention to something else. It was so easy to kill.

For consumption: “The meat was previously roasted and browned in lard with onions, spices, wine and verjuice giving acids and spicy flavors so popular in the Middle Ages, and then liaised with burnt bread to give him his essential black colour.

Over the centuries, spices have disappeared in favor of bouquet garni, verjuice for white wine and broth, onions are included at the end of cooking, the liaison is made with flour and crushed liver and burnt bread turned into croutons. Thickening with blood appeared late.

Food taboos with the blood were the cause, as well as the fragility of the blood that makes a liaison delicate technically.”

According to Curnonsky, it is of Savoy that comes the tradition of using blood for civet of hare. “This dish has nothing in common with the clear Parisian stew. When it is successful, it can keep pace with the famous hare a la royale “.

Because a hare requires thickening with blood, otherwise it is a fricassee or a common ragout. It is this dish that the chef François in 1651 was offering.

To make a hare civet, he was advising to “cut into pieces and potting with broth and cook to do well and season with a bouquet until half cooked, add a little wine and spread a little flour with a little onion and vinegar. Serve with green sauce and promptly. ”

The art of civet lies in its preparation, to allow the flavors of racy and wild hare, while providing tenderness to the meat. Hence the importance of the marinade in red wine with his blood. It requires a rich wine full of body. This is that wine that will accompany the food.

The hare must marinate overnight in the marinade. After being drained, the pieces are seared on high heat in a skillet with the bacon and onions. The whole is then dusted with flour, then wetted with marinade flavored with a bouquet garni.

All must simmer about two hours. It is just before serving that is incorporated the blood. To keep the blood fluid, there was added a little salt and vinegar. Some are mixing the liver with the blood prior to the liaison.

Cut the hare. Salt and pepper. Keep the blood cool in a little red wine.
Prepare the marinade: Peel the vegetables, cut the carrots, chop the onions and shallots and chop the garlic.

The next day, remove the hare pieces from marinade, drain and pat dry with paper towels. Set aside the liver of the hare.

In a casserole, sauté the diced bacon in a little oil, then remove it; Sauté onions then remove also. In their place, put in the pieces of hare and fry them, browning on all sides. Flambé with cognac .. Sprinkle the flour and stir well to incorporate it.Cover with red wine and some of the marinade (sift it).

Add the bouquet garni, bacon and onions. Adjust the seasoning. Cook covered and simmer gently for 2 hours to 2 hours 30 minutes at boiling temperature.

Chop the liver of the hare and mix the blood of the animal. Gradually add to this liquid puree, 3 tablespoons of stew sauce and red currant jelly. Pour this mixture into the pan, stir and cook for another 5 to 10 minutes uncovered.

When ready to serve, remove the bouquet garni and arrange in a serving dish. Serve with croutons browned in butter.