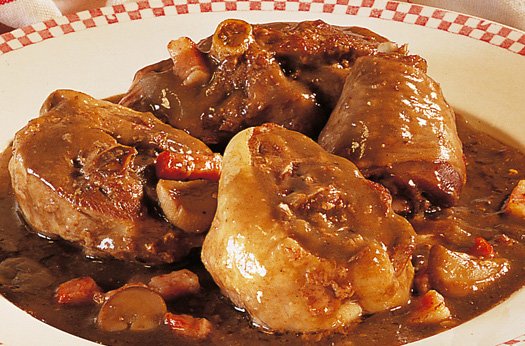 Coq au vin is a very old recipe. According to various legends, it would come from ancient Gaul and Julius Caesar. Indeed, at this time the wine was a sign of wealth, it was on all menus of the great banquets of the emperors.

The chefs of this reign were ordered to find new recipes to assert the authority of the emperor. Thus, a chef had the idea to mix wine in the preparation of the dish.

This is why we know coq au vin as a French recipe of rooster braised and cooked in wine. Its success was such that each region will have an appropriate variant.

“The emblem of France, it was the rooster. Today it is the coq au vin. “- Gilbert Cesbron

A tradition traces the dish to the conquest of Gaul by Julius Caesar. The chief of a tribe Arverne, to taunt the Romans who besieged him, send him a rooster, symbol of the valor of the Gauls. Caesar returned his politeness and invited him to dinner where he was served his rooster cooked in wine.

This dish requires a rooster, or alternatively a chicken, cut into pieces, small onions, garlic, bacon, a liqueur like brandy, red wine, a bouquet garni, carrots, mushrooms, parsley and herbs de Provence. It is often served with pasta or potatoes.

The wine is most often red and sometimes yellow, in which case the mushrooms are morels.

Coq au vin in Auvergne, a regional specialty, features a beautiful local poultry with local wine and does not despise the presence of fungi, especially mushrooms!

Preparation requires a rooster or, more modestly, a big chicken or a hen. Once plucked, and emptied, the chicken is cut into pieces. These are sautéed in butter in a pan on all sides along with bacon and onions, then flamed with brandy, simmered an hour and a half in the wine with a hint of sugar, a clove of garlic chopped and a bouquet garni.

When cooked, there will be added to the pot mushrooms (previously browned in butter), and a little blood from the animal. After removing the bouquet garni, the dish is at onceserved very hot.

Royal dish of Sundays and special occasions for which they sacrificed the master of the backyard, or, more often, a chicken, coq au vin continues to inspire respect and delight gourmets.

The Auvergne wants to be the “homeland” of coq au vin, although other provinces are claiming paternity, making it a great classic of French cuisine.

This recipe reminds us that Auvergne was before the phylloxera crisis, one of the two largest French wine regions (with the Languedoc) and the Chanturgue, one of its most famous wines (reduced now to a few hectares). Wherever there are vineyards in Auvergne (north-west of Clermont, in the region of Saint-pourcinoise and the Lot valley), is found this recipe.

Cut the rooster into pieces.

Peel the onions and melt the bacon in a large pan with half the butter, stirring for 10 minutes. Add onions and sauté for 10 more minutes, stirring.

Reserve this bacon and onions mix. Replace them in the pot with the chicken pieces, pouring a little oil. Brown them on all sides.

Flour slightly, mix well so that the flour gets brown, then put back the chicken pieces and pour heated wine.

Peel and chop the garlic and add to the pan with the bouquet garni. Cover and simmer 1 hour.

Use this time to clean and slice the mushrooms before sauté them in a pan with the remaining butter. Drain.

Coq au vin having been cooked for 1 hour, add the mushrooms and cook over low heat for 25 minutes. Pour into casserole the chicken blood and heat gently, stirring for 5 minutes, until the sauce is thick and creamy.