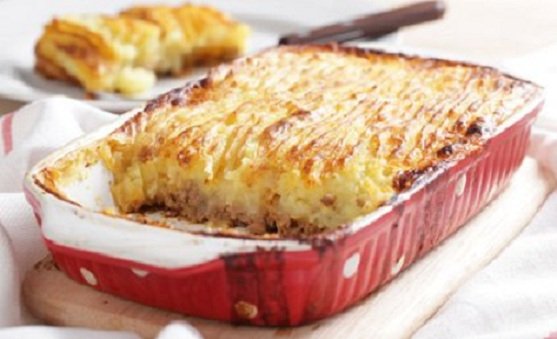 The Hachis Parmentier is named after the chemist Antoine-Augustin Parmentier, convinced that the potato could effectively fight famine, proposed it to Louis XVI. The recipe for Hachis is a gratin made from mashed potatoes and minced beef meat.

This French Shepherd’s Pie owes its creation to Antoine Augustin Parmentier, born August 17, 1737. After a trip to Ireland, Parmentier discovered the potato and its important medicinal properties (bowel, circulation …).
After his audience with the king, he gave birth to the recipe for Hachis to fight famine.

Parmentier uses a ploy to overcome the reluctance: he kept the field at plains of Sablons by armed men during the day but not at night. Custody of field increases the value of culture in the eyes of the people of Paris and at night tubers are easy to steal.

So the people of Paris had the opportunity to “steal” them, and so spreads the consumption of tubers.

Mr. Parmentier died December 17, 1813 but not his work, from the Hachis Parmentier has gone through the generations across the globe.

The hachis has become a very popular dish because it is an economic family meal. Indeed, the hachis uses the remains of a roast beef or pot-au-feu. The recipe for hachis is widely used in canteens and basic restaurants.